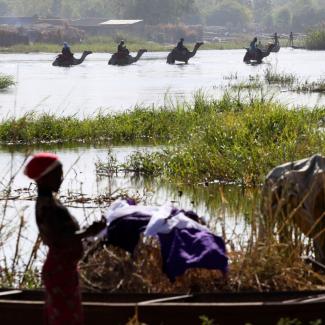 For the first time since the pandemic, I am finally able to travel to sub-Saharan Africa. It's a region I have visited frequently for my work fighting neglected tropical diseases (NTDs) that are a significant burden across the region.

As I prepared for this trip, I reflected on a rare upside of the globalized nature of COVID-19: that it has sensitized people around the world to the debilitating impact of infectious diseases on individuals, families, and entire communities. My hope is that this shared experience can translate into greater support for combating many other diseases that are interrupting millions of lives every day.

That includes the NTD that was a focus of my recent trip to Ghana. Schistosomiasis is a disease rarely seen in wealthy countries. It's often misunderstood and misdiagnosed even in sub-Saharan Africa, where more than 200 million people are at risk. Schistosomiasis is caused by tiny larvae of parasitic worms found in fresh water. The worms penetrate the skin when a person is in contact with infested water and once in the body, mature into adults where they can cause a wide range of problems, including damage to the liver, kidneys, and bladder.

The worms penetrate the skin when a person is in contact with infested water and once in the body, mature into adults

I'm working on a project called the FGS Accelerated Scale Together (FAST) Package project with a coalition of organizations and health professionals who focus on a particularly terrible manifestation of schistosomiasis called female genital schistosomiasis (FGS), which currently affects about 56 million women in Africa. FGS does not just impact the bladder, it affects the whole pelvis including the genitals and can produce vaginal discharge, pain with intercourse, bleeding, and infertility. It can also lead to an ectopic pregnancy—a life-threatening condition when a pregnancy occurs outside the uterus.

Many symptoms of FGS are similar to symptoms for other conditions. It is routinely misdiagnosed as a sexually transmitted infection (STI) because health-care providers are not aware of it. This contributes to social stigma and even domestic abuse from husbands who mistake FGS symptoms as evidence of infidelity.

The high incidence of FGS in African women is linked to the fact that women and girls in resource-poor areas are often in charge of laundry and collecting water for the household, activities that increase their exposure to rivers and other freshwater sources that harbor schistosomiasis parasites.

In our FAST workshop, Nurse Ruth Allotey of the Korle-Bu Teaching Hospital in Accra, Ghana, shared a case that still torments her today. A woman in her mid-thirties came to see her with vaginal discharge, abdominal pain, and irregular bleeding. She had sought care and treatment from a chemist shop, pharmacy, her local clinic, an urban clinic, and even an obstetrician-gynecologist—referred from place to place because her symptoms did not resolve. She spent a lot of money and even lost her job in the process of seeking care. She came to Nurse Allotey for help but sadly, she also did not know what was wrong. Now, after this training workshop, Nurse Allotey recognizes that this was a clear case of FGS that could have been easily treated and she is trying to find the patient to ensure she gets the treatment that she needs and deserves.

Through the workshop and the FAST Project more generally, we are trying to prevent this tragedy from repeating. But, the fight against FGS brings promise and frustration in equal measure. There is promise because there is a safe, inexpensive drug called praziquantel that can treat schistosomiasis infections with a single dose, improving symptoms and reducing suffering. In partnership with the World Health Organization, Merck KGaA donates praziquantel for use in pre-school and school age children. It's provided through mass treatment programs in sub-Saharan Africa, most commonly through schools and local health organizations. These programs have made great progress using the drug, but this progress has been threatened over the past two years. Targeted efforts to fight schistosomiasis through mass treatment campaigns have experienced significant disruptions due to the COVID-19 pandemic. This setback is magnified by the many missed opportunities to simply integrate schistosomiasis treatment and prevention into existing routine health interventions to reach at-risk women and girls outside of schools.

With pandemic restrictions starting to ease, there is an opportunity to do more than restart mass treatment campaigns. We should also embrace cost-effective ways to make rapid progress by embedding treatment and prevention within programs that target diseases that have a clear connection to women and girls at risk for FGS. For example, women with FGS are three to four times more likely to become infected with HIV and often experience higher HIV viral loads, as well. That should make FGS diagnosis and treatment a priority in programs supported by the U.S. President's Emergency Plan for AIDS Relief (PEPFAR) and the Global Fund.

Programs for cervical cancer prevention and screening—efforts to reach girls for vaccination against Human Papilloma Virus (HPV)—offer another avenue. Evidence of FGS can easily be detected during these screening programs and praziquantel can be distributed if needed. Interventions that focus on sexually transmitted infections should consider FGS during patient evaluations, especially when infections have not resolved after sexually transmitted infection (STI) treatment. In fact, a single dose of praziquantel should be standard practice when seeing untreated women and girls in health clinics in areas where the schistosomiasis parasite is common, regardless of whether the patients are currently showing symptoms.

To reverse the tide, there is an urgent need for information campaigns targeting health professionals. Physician Hameedat Omoyele-Abdussalam, an OB/GYN in Nigeria, said she was never taught about FGS in school. She was proudly part of documenting the first FGS cases in Nigeria in 2016 and is now championing efforts to inform her colleagues and new medical students of the risk so women and girls are no longer misdiagnosed.

Public education efforts must also reach women and girls, to help them understand the symptoms of FGS and seek out proper care as soon as possible and participate in mass treatment programs where they are provided. To achieve this goal in Nigeria, physician Ibrahim Rabiu, along with Omoyele-Abdussalam, is launching a new FGS Society to help prevent and treat FGS across the country, informing health practitioners and sensitizing at-risk populations.

FGS has been especially overlooked within the already marginalized world of neglected tropical diseases. WHO Director-General Tedros Adhanom Ghebreyesus referred to FGS as the “silent and neglected scourge in sexual and reproductive health in Sub-Saharan Africa.”

As we emerge from the worst days of COVID-19 and resume health interventions that were slowed or suspended during the pandemic, we need to take stock of blind spots that existed before the pandemic and move quickly to correct them. It's particularly important to target diseases that have such a significant impact on women. The link between FGS and HIV risks alone should be sufficient enough to warrant more attention, given how African women and girls are disproportionately affected by HIV. A new group is coming together to try to fill the gap and find the opportunities, the FGS Integration Group (FIG)—it links HIV partners, those fighting cervical cancer, and NTD partners to integrate FGS into existing programs to reduce unnecessary suffering.

FGS is low-hanging fruit when it comes to addressing disparities in women's health. The treatment is cheap and effective, and it can be easily administered anytime a health-care provider is dealing with anything related to HIV, cervical cancer, STIs or just a routine visit. The biggest barrier is a lack of awareness of the problem. In that sense the cure is not so much a drug. Rather, it's seeking a remedy for the somewhat puzzling condition in which a disease that affects tens of millions of women somehow manages to be hiding in plain sight.

Julie Jacobson, MD, is managing partner for the global health non-profit Bridges to Development. She served as president of the American Society of Tropical Medicine & Hygiene (ASTMH) in 2021 and has worked at the CDC and the Bill & Melinda Gates Foundation.