Go to homepage
The Growing Cancer Threat in Africa
Aging 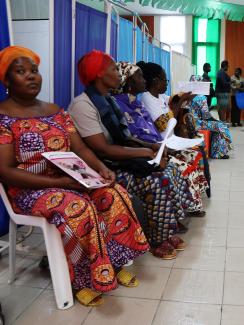 A deadly disease is expanding fast in sub-Saharan Africa. It already affects hundreds of thousands, and unless governments come together to act soon, millions more will pay the price.

That disease is cancer. While it may be not the latest outbreak of a novel or exotic disease attracting global attention, it is worth remembering, especially on World Cancer Day, that everyday noncommunicable diseases like cancer are the ones that kill the most people. Increasingly, that is true even in the poorer regions of the world.

Increase in cancer deaths in sub-Saharan Africa since 2000

In wealthy nations, lower smoking rates, personalized medicine, more screening, better diagnostics, and novel treatments like immunotherapy are reducing cancer rates and improving survival, even among aging populations. Much of that progress, however, is not reaching sub-Saharan Africa. Cancer deaths in sub-Saharan Africa increased 45 percent since 2000, and it now kills more than a half a million people each year. The rise of cancer in sub-Saharan Africa has hit women especially hard. Breast cancer deaths in the region have increased 70 percent since 2000, and it combined with cervical cancer now cause one out of every five cancer deaths in sub-Saharan Africa. In contrast, breast cancer mortality rates have fallen in high-income countries. Cervical cancer, which is completely preventable with HPV vaccine, is increasing becoming a health threat only experienced by poor women in poor nations.

Such infrastructure is expensive, far beyond the health budgets of countries in the region. Between 2000 and 2015, government health spending in sub-Saharan Africa nations grew by more than 4 percent each year. It remains, however, low by global standards. All forty-eight governments in sub-Saharan Africa together spent less on health in 2014 ($67 billion) than the government of Australia ($68 billion). At that rate of spending, many countries will not be able to keep up with the pace and scale of the health changes in their populations. For example, the government of Ethiopia currently spend $17 per person, but is undergoing a dramatic increase in the share of its overall health burden that is associated with cancer and other noncommunicable diseases, from 17 percent in 1990 to a projected 67 percent in 2040.

The world’s attention is rightly focused on the threats that outbreaks of emerging infectious disease pose to lives and economies globally. However, we mustn’t let concern for the woeful toll that may be imposed by those dangerous diseases obscure the terrible human and economic cost already imposed by everyday diseases like cancer, increasingly in the poorer regions of the world.

by Sandra B. Munro