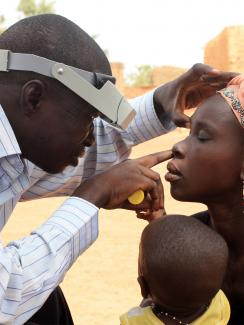 The medicine of choice used to treat the world’s leading cause of blindness has been found to help keep children alive in underdeveloped countries. The antibiotic azithromycin is used to treat and prevent trachoma, an eye infection caused by the bacterium Chlamydia trachomatis. In a clinical trial conducted in Malawi, Niger, and Tanzania, called Macrolides Oraux pour Réduire les Décès avec un Oeil sur la Résistance (Oral Macrolides to Reduce Deaths with an Eye on Resistance, or MORDOR), one dose of this antibiotic was found to significantly reduce child mortality This was not surprising, because as a broad-spectrum antibiotic azithromycin effectively prevents a range of common infections. Saving children’s lives provides a strong rationale for mass drug administration of this drug, but its widespread use may induce the emergence of antibiotic-resistant bacteria. Does the benefit of mass drug administration of azithromycin outweigh the risk of antibiotic resistance?

The Benefits of Azithromycin

When azithromycin was distributed to communities in Africa to treat and prevent trachoma, overall childhood mortality was found to be significantly reduced. It worked best in infants up to five months old, averting one in four deaths.

Even though deaths among children under five dropped by more than half from 1990–2015, death rates in this age group have remained stubbornly high...

This was not surprising, since azithromycin can prevent the three most common causes of childhood mortality – malaria, diarrhea, and respiratory infections. Even though deaths among children under the age of five dropped by more than half from 1990–2015, death rates in this age group have remained stubbornly high in many low- and middle-income countries. Larger and more focused trials are underway to evaluate mass distribution of azithromycin on child mortality, including an ongoing clinical trial in Burkina Faso, designed to target 8- to 27-day old infants with a single dose of azithromycin. The Bill and Melinda Gates Foundation, which is funding the study, has high hopes that this will help prevent childhood mortality. Based on these studies, the World Health Organization is considering whether to use mass drug administration for newborns. However serious concerns remain over whether mass drug administration will speed the emergence of azithromycin-resistant bacteria. Is the good of saving children’s lives worth the risk?

The Eye of MORDOR

Antibiotic resistance is a result of unnecessary use and lack of understanding of how it develops. Advocates of azithromycin treatment point out that the antibiotic is administered infrequently to young children, and this level of exposure is not enough to drive resistance. The designers of the MORDOR trial realized that robust stewardship in the use of antibiotics, including monitoring resistance, is necessary to ensure success of mass administration of azithromycin. Further, targeting treatment to specific regions is necessary. Geospatial mapping to guide interventions is an important tool for ensuring this. Precise estimates of child mortality, such as those produced by the Local Burden of Disease group at the University of Washington’s Institute for Health Metrics and Evaluation, can be used to develop simulations to target the most lives that could be saved with azithromycin. Such monitoring and systemic approaches will be key to a favorable outcome.

Sandra B. Munro, PhD, is a Publications Officer at the Institute for Health Metrics and Evaluation, University of Washington.

The Problem of COVID-19 Vaccine Hesitancy in Teens

Development assistance should reflect this need