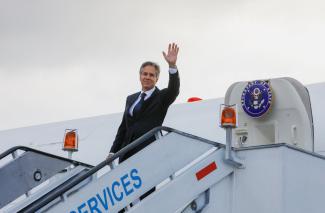 In announcing a new strategy for sub-Saharan Africa in August, Secretary of State Antony J. Blinken highlighted the U.S. President's Emergency Plan for AIDS Relief (PEPFAR). Before the upcoming seventh replenishment conference for the Global Fund to Fight AIDS, Tuberculosis, and Malaria (Global Fund), Mark P. Lagon analyzed why the fund is important to U.S. foreign policy. PEPFAR and the Global Fund have saved millions of lives, stimulated innovative disease-control approaches, and facilitated multistakeholder governance. They are among the most meaningful things the United States has done in global health.

However, while the Global Fund and PEPFAR made progress, the United States was failing to prepare for the most dangerous health threat to the nation—a pandemic involving a lethal, respiratory virus. The United States also failed to counter challenges from China, Russia, and the spread of authoritarianism, which now endanger U.S. security, democracy worldwide, and the liberal international order. PEPFAR and the fund are global health successes wrapped in foreign policy failures inside a geopolitical crisis. Under this broader U.S. foreign policy perspective, these programs appear less consequential.

The Global Fund and PEPFAR emerged in the early 2000s, when foreign policymakers started paying more attention to health. This shift involved evaluating health challenges under the hierarchy of interests that foreign policy serves—protecting national security and enhancing national economic power as vital interests, and providing development and humanitarian assistance as contingent interests. A Council on Foreign Relations report in 2001 argued, for example, that the United States could enhance its "national security, increase prosperity at home, and promote democracy" by "placing health squarely on its foreign policy agenda."

The diseases that PEPFAR and the Global Fund were created to address—HIV/AIDS, tuberculosis, and malaria—posed no direct threat to U.S. security and economic prosperity, unlike pandemic influenza. The security threat was indirect. Unmitigated, these diseases could help destabilize fragile states and make them havens for terrorists, the top national security threat after the September 11 attacks. The economic case was also indirect—healthier populations could be better export markets.

However, the development and humanitarian rationales for the Global Fund and PEPFAR were compelling. The absence of balance-of-power and ideological competition in international relations at that time meant geopolitics did not influence U.S. development and humanitarian assistance. The multistakeholder and human rights approaches taken by these programs resonated with democratic values that were then globally ascendant.

The World Turned Upside Down

Despite policy rhetoric about pathogenic threats to vital interests, disease events before COVID-19, including pandemic influenza in 2010, exposed the United States as unprepared. The coronavirus pandemic revealed a twenty-year failure to address disease threats to U.S. national security and economic well-being. Over the same period, the United States struggled to counter China's rise and Russia's revanchism and could not stem democracy's global decline. Domestic politics became more nationalistic and inward-focused, as reflected in former President Donald J. Trump's "America First" foreign policy and President Joe Biden's promise of a "foreign policy for the middle class."

These policy failures and political changes happened while the United States pursued global health leadership. China and Russia challenged the U.S. power and influence without emphasizing global health. These emerging powers have not donated much to the Global Fund but have received hundreds of millions from it. Countries that the fund and PEPFAR have supported form part of the global democratic decline and have joined China's Belt and Road Initiative—a strategy that worries U.S. policymakers.

Consistent with the hierarchy of interests, domestic politics have pushed foreign policy to prioritize geopolitical threats to national security and economic problems at home. The Carnegie Endowment for International Peace's report on making U.S. foreign policy work better for the middle class did not mention PEPFAR or the Global Fund but emphasized the imperative of addressing pandemics "that could imperil middle-class security and prosperity."

COVID-19 was such a pandemic, and it proved a debacle across all national interests. Over one million Americans have died. The pandemic savaged the U.S. economy. Congress spent trillions on domestic responses. The heightened domestic focus in foreign policy contributed to U.S. vaccine nationalism. Geopolitics shaped responses, as seen in vaccine diplomacy. COVID-19 damaged development and humanitarian efforts. The pandemic accelerated the global decline in democracy.

PEPFAR and the Global Fund pivoted to address COVID-19. However, these pivots underscored the failure to build capabilities to handle the most dangerous pathogenic threats to vital interests. The death and economic devastation in the United States highlighted that neither the fund nor PEPFAR protected vital U.S. security and economic interests in global health.

Secretary Blinken's speech on the new U.S. strategy for sub-Saharan Africa provides another opportunity to scrutinize global health engagement and foreign policy. Blinken noted that PEPFAR has spent "over $100 billion" fighting HIV/AIDS, "nearly all of it . . . in sub-Saharan Africa." However, the strategy itself raises doubts about PEPFAR's foreign policy impact.

The strategy prioritizes sub-Saharan Africa's geopolitical significance, an admission that China and Russia have made inroads in Africa without doing anything similar to PEPFAR. Blinken emphasized Africa's importance to the Group of Seven's global infrastructure plan and the U.S. commitment to raise $200 billion for it—reactive attempts to counter the gains China has made through its Belt and Road Initiative.

The strategy stresses the need to revitalize democracy, underscoring democracy's decline, which began after PEPFAR's creation. It seeks African support for strengthening the liberal international order, which deteriorated while PEPFAR saved lives. The strategy recognizes that COVID-19 set back "decades of hard-earned progress" in Africa to which PEPFAR contributed, another consequence of pre-COVID failures on pandemic preparedness and response (PPR). The strategy makes new health commitments, such as responding to "the desire of African countries for vaccine self-sufficiency." However, these commitments are anchored in the global infrastructure plan and PPR, highlighting previous U.S. foreign policy failures on geopolitics and PPR.

In sum, the United States has been forced to change its strategy toward the region where PEPFAR has spent nearly all of its funds. In Africa, the United States has experienced balance-of-power and ideological setbacks vis-à-vis authoritarian powers uninterested in global health leadership. Even with PEPFAR, Africans suffered what Blinken called a "devastating blow" from COVID-19.

Even with PEPFAR, Africans suffered what Blinken called a "devastating blow" from COVID-19

A Fund Too Far?

COVID-sparked proposals to expand PEPFAR and the Global Fund into PPR reflect the need for U.S. foreign policy to protect the full range of national interests in global health. But that strategy and rationale differ from those that have defined the fund and PEPFAR. This difference generates questions about tasking these programs with PPR responsibilities.

Prior to COVID-19, the Global Fund did not focus on PPR. Its last strategic plan before COVID-19 did not mention PPR or describe HIV/AIDS, tuberculosis, and malaria as pandemics. And, despite progress, the fund faced serious problems. In 2019, the World Health Organization asserted that HIV/AIDS "continues to rage." The fund was "off track" before COVID-19 on goals for reducing infections and deaths concerning HIV/AIDS, tuberculosis, and malaria. COVID-19 then became a "catastrophe" for the fund’s efforts, leading Emily Bass to call out the "raging pandemics" of these and other diseases.

At this challenging moment for the Global Fund, the policy failures that COVID-19 exposed have forced the fund to add PPR to its responsibilities. The proposition is that the fund can recover from the damage that COVID-19 inflicted, end three pandemics by 2030, strengthen PPR in ways that protect U.S. vital interests, and make international relations more equitable—all in a geopolitically dangerous, less democratic, COVID-scarred, and climate-disrupted world.

The Carnegie report on a foreign policy for the middle class recommended avoiding "stale organizing principles for U.S. foreign policy," such as "a new Cold War with China," because such notions widen "the disconnect between the foreign policy community and the vast majority of Americans . . . who are more concerned with proximate threats to their physical and economic security."

The addition of PPR responsibilities to the Global Fund and PEPFAR demonstrate that a strategic shift in U.S. foreign policy on global health is underway. The shift recognizes the need to invest in capabilities that protect U.S. national security and economic power from pathogenic threats. Potential synergies created by achieving stronger PPR and advancing the fight against HIV/AIDS, tuberculosis, and malaria offer possible ways to rebuild solidarity in global health that was damaged during COVID-19.

Whether PEPFAR and the Global Fund can become capabilities that enhance U.S. security and global solidarity on public health remains to be seen. What is clear going forward is that the foreign policy importance of PEPFAR and the fund will be judged by PPR criteria anchored in U.S. vital interests in addition to the metrics traditionally used to assess these programs.

Fix It or Forget It

Why the Global Fund Is Important to U.S. Foreign Policy