The Devastating Use of Sexual Violence as a Weapon of War 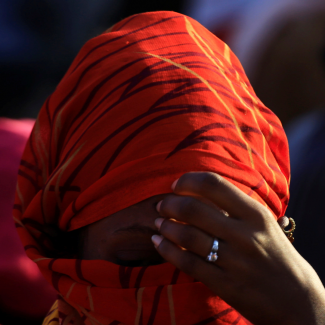 An Ethiopian woman who fled fighting in Tigray, in Hamdayet village near the Sudan-Ethiopia border, in Kassala State, Sudan, on November 22, 2020. REUTERS/Mohamed Nureldin Abdallah
by Caroline Kapp November 1, 2022

Rape and other forms of sexual violence have been pervasive in conflicts throughout history. This fall, three UN reports highlight the prevalence of these atrocities in Ukraine, Haiti, and Ethiopia. While the nature of the conflicts in each country differs vastly, the horrifying use of sexual violence to torment civilian populations; punish ethnic, political, or cultural rivals; and assert and maintain control, is present in each case.

International law provides wide protections against sexual violence, but enforcement of these provisions is weak

Sexual violence during conflict can be divided into three overarching categories: a war tactic, widely committed with an intentional purpose; tolerated, but not specifically ordered, by leaders; and committed independently by individuals when the opportunity arises.

While international law provides wide protections against sexual violence, enforcement of these provisions is weak. Considering the current conflicts in Ukraine, Haiti, and Ethiopia, it is evident that international law has done little to stem the perpetration of sexual violence in conflict. International organizations need to build a framework for developing country-specific, survivor-focused responses—centered on investing in local organizations when possible—that can provide resources and avenues to justice for victims.

Allegations of rape and sexual violence in Ukraine have been numerous since Russian troops invaded Ukraine in February 2022, and do not appear to be subsiding. A report released on October 18 examined human rights violations that took place in the first two months of the 2022 war in Ukraine. The United Nations found that Russian forces have committed the "vast majority" of human rights violations during the conflict. These crimes include the widespread perpetration of rape and sexual violence. Victims of sexual violence range in age from four to eighty-years-old. The report details a four-year-old child being forced to perform oral sex on a Russian soldier. Other documented violence includes gang rape and forcing family members to watch while their children and mothers were sexually assaulted. Most of the cases of sexual violence also qualify as torture or cruel or inhumane treatment.

Pramila Patten, UN special representative of the secretary-general on sexual violence in conflict, called the use of rape by Russian forces a "military strategy," and stated that it is being used as a "deliberate tactic to dehumanize the victims." According to Patten, the United Nations has verified more than one hundred cases of rape since the onset of the conflict. The real number is likely much higher. The commission is still investigating whether the sexual and gender-based violence amount to a more widespread pattern.

The conflict situation and forced displacement have made it increasingly challenging for victims to access health care, psychological resources, and law enforcement. While there is an unprecedented level of reporting on sexual violence in Ukraine and many victims are sharing their stories with international media, the trauma and social stigma surrounding sexual violence has made many survivors hesitant to talk about their experiences.

Crisis continues to escalate in Haiti. The aftermath of the COVID-19 pandemic, the assassination of President Jovenel Moïse, and devastating earthquakes in 2010 and 2021 have contributed to the deterioration of security and political stability. Gang violence has continued to increase in the capital city of Port-au-Prince where around ninety-five gangs compete for territorial control.

A UN report, jointly authored by the UN Office in Haiti and the Office of the UN High Commissioner for Human Rights, described armed gangs using sexual violence to "instill fear, intimidate, subjugate, and control local populations." Gangs employ sexual violence as a tactic in larger regiments of terror and violence, as mechanisms by which to punish people associated with rival gangs, as part of kidnappings, and to "assert power and control over people living in their own areas."

Most victims of sexual violence are women and girls, but men and boys have also been victimized. The report highlighted the ways sexual violence is affecting LGBTQ+ individuals. In particular, LGBTQ+ women have recounted being victims of "corrective rapes" used to "cure" them of "homosexuality."

This problem is particularly challenging to address in Port-au-Prince because of widespread impunity. Institutional weakness combined with economic insecurity means that there is a near complete lack of accountability for sexual violence. Additionally, there is insufficient medical and psychological care. According to the UN report, Haiti's health system is ill-equipped to provide necessary services, and insufficient mental health resources leave survivors without support to navigate the short- and long-term trauma associated with sexual violence.

Sexual assault has been employed as a tactic in the conflict-ridden region of Tigray since civil war broke out two years ago. Tigray, a northern region in Ethiopia, has been the center of a brutal civil war between ethno-regional militias, federal government forces, and the Eritrean military. In August 2021, Amnesty International reported that forces aligned with the Ethiopian government were employing "rape, gang rape, sexual slavery, sexual mutilation, and torture" as weapons of war against Tigrayan women and girls. It classified the atrocities as part of a "strategy to terrorize, degrade, and humiliate" victims and the ethnic group at large.

A UN report released in September made it clear that sexual violence is still being used on a large-scale in Tigray. The UN Commission of Human Rights Experts on Ethiopia report found reasonable grounds to believe armed groups have committed war crimes and crimes against humanity in Tigray. It established that rape and other forms of sexual violence are occurring on a "staggering scale," and government forces and Eritrean forces have targeted Tigrayan women and girls with "particular violence." The report also documents Tigrayan forces committing rape and sexual violence against Amhara and Eritrean women and girls. The Ethiopian government rejected the report's findings.

International bodies need to build survivor-focused, culturally sensitive standards for humanitarian groups to help people who have been affected by conflict-related sexual violence. They need to provide resources and training to local health-care professionals and civil society organizations to support victims in the short- and long-term.

Conflict-related rape and sexual violence are uniquely challenging to address. Cultural taboos and fear of reprisals make many survivors hesitant to share their trauma, often rendering the abuse they have experienced an "invisible" crime. Additionally, the circumstances of conflict reduce the ability of health-care providers to access and provide resources those affected. The UN reports on Ukraine and Port-au-Prince point to significant shortages in medical resources and psychological care in areas of conflict. This is a particularly pressing issue for survivors of sexual violence. In order to best reduce the risk of sexually transmitted diseases and pregnancy, victims need to receive medical care within seventy-two hours. Victims of brutal rape, particularly pervasive in Port-au-Prince, may require specialized surgical care.

In October, the World Health Organization (WHO) announced that it is training health-care workers in Ukraine to provide survivor-centered care to victims of sexual and gender-based violence. The two-day training, which has been administered to more than sixty health-care workers from the Odesa, Dnipropetrovsk, and Kyiv regions of Ukraine, focuses on identifying signs of sexual violence, providing medical and psychosocial care, and referring victims to legal and social services.

Svitlana Vedmid, a family doctor and medical director in the Dnipro region of Ukraine, took part in the WHO training. "As family doctors, we must understand that working with gender-based violence survivors is our duty and part of our daily work," she said in a WHO news report.

"Family doctors are often the primary link to other services, such as mental health services, and they are also often the first to contact those experiencing violence. For some people, their doctor may be their only support if something happens," Vedmid explained.

WHO plans to increase trainings to reach health-care providers in eight regions of Ukraine. These trainings are part of ongoing humanitarian efforts to respond to the needs of civilians in Ukraine. Programs like these need to be built around each individual conflict, as the needs of victims will differ depending on their background and the trauma they experienced.

Prosecutions of rape and sexual violence are rare and complicated. Survivors are often hesitant to report abuse and to testify due to trauma, social stigma, and a variety of other factors. Even when survivors do step forward, it can be hard to gather sufficient evidence for a conviction, particularly in conflict zones.

Prosecutors in Ukraine have already initiated investigations into rape and sexual violence perpetrated by Russian soldiers. Ukraine began its first trial of a Russian soldier charged with rape in June. The soldier is being tried in absentia. UN investigators, national prosecutors, and civil society organizations are working to document war crimes throughout Ukraine. They hope to create a record and build evidence for future prosecutions. National investigations and prosecutions of this nature rely on a state maintaining a functional judicial system during conflict, which is uncommon, and are dependent on state cooperation.

International bodies can prosecute rape and sexual violence as war crimes, crimes against humanity, and acts of genocide. The standards for these crimes were codified in the 1990s by the statutes of the international criminal tribunals for the former Yugoslavia and Rwanda. In addition to ad hoc tribunals created by the United Nations, like those mentioned above, the International Criminal Court (ICC) has the authority to bring charges and initiate trial proceedings. The ICC has already launched an investigation into alleged war crimes in Ukraine, but it can take years for investigations to turn into legal action. This will be further complicated by the fact that neither Ethiopia, Haiti, nor Russia have ratified the Rome Statute, the treaty governing ICC jurisdiction.

Caroline Kapp is a research associate for U.S. foreign policy at the Council on Foreign Relations.