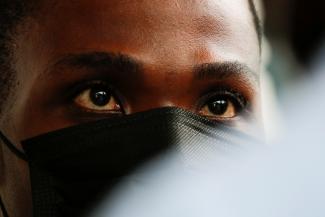 Lesbian, gay, bisexual, transgender, queer, and intersex (LGBTQI+) Ghanaians have increasingly experienced violence and persecution over the past decade, with reports of anti-LGBTQI+ mob attacks, rapes, stonings, and death threats across the country.

Underlying these attacks is a British colonial-era "unnatural carnal knowledge" law that first codified homophobia in Ghanaian law and culture by criminalizing nonvaginal sexual penetration between consenting adults. Despite the law's foreign origin, anti-LGBTQI+ groups cite it to argue that LGBTQI+ people are "unnatural" and "un-Ghanaian" and to advance a decade-long campaign to eradicate LGBTQI+ existence. In the context of this revisionist history and pervasive violence, LGBTQI+ Ghanaian activists are creating virtual and physical safe spaces to affirm their identities and speak out about their experiences.

However, growing visibility of the community has drawn the ire of opponents, specifically, a coalition of religious groups and leaders led by Ghanaian anti-LGBTQI+ activist Moses Foh-Amoaning. In March 2021, Foh-Amoaning's group reportedly lobbied lawmakers, including Parliament member Sam George, to introduce one of the harshest anti-LGBTQI+ bills Africa has seen to date, after a failed attempt in 2018 to introduce a similar bill. A few months later in August, the bill, titled the "Promotion of Proper Human and Sexual Rights and Ghanaian Family Values" bill, was introduced to Parliament and aims to criminalize the "promotion, advocacy, funding, and act of homosexuality in all its forms."

If passed, the new law, which includes aspects of similar laws in Africa, would require Ghanaians to report suspected LGBTQI+ persons to the police or face four  months in prison. Suspected LGBTQI+ people would be required to undergo conversion therapy or face up to five  years in prison. Intersex persons—people born with physical or biological sex characteristics that do not fit traditional definitions of male or female—would be subjected to forced medical intervention, for which they would bear the financial and psychological burden. Activists and allies for LGBTQI+ rights would face an even harsher punishment of up to ten years in prison. The bill also calls for the immediate disbandment of all LGBTQI+ rights organizations and would criminalize any funding efforts to support them. A recent trial court decision to sentence a gay man to 20 years imprisonment for "attempted assault" forecasts that sentencing could be harsher for LGBTQI+ people and allies under the proposed law.

The anti-LGBTQI+ bill was introduced to Parliament just two years after Foh-Amoaning's group partnered with the U.S.-based ultra conservative group World Congress of Families (WCF) to host a conference in Ghana in response to the country's new comprehensive sex education (CSE) school curriculum. With a strong anti-LGBTQI+ and anti-abortion message, the 2019 summit, titled "African Family and Sustainable Development: Strong Families, Strong Nations," featured Western and African moral crusaders, including Bill Muehlenberg, a Christian right-wing extremist who apologized for "what the West has done in its war on family, faith, and freedom."

The bill and other anti-LGBTQ+ violence, raids, and backlash this year are the most recent developments in a series of events over the past decade in Ghana that have constituted and reflected social and political polarization of LGBTQI+ rights in Ghana.

Looking back, the year 2011 in particular marked a turning point in Ghana regarding LGBTQ+ people and rights. In May of that year, The Daily Graphic, one of the country's most popular print newspapers, published an article titled "8,000 Gays in Two Regions; Majority Infected with HIV/AIDS," after findings from a government-sponsored surveillance study of HIV among men who have sex with men (MSM) was disseminated in a meeting. The article made unsubstantiated claims that NGOs were registering gay youth and that the 8,000 estimate indicated a growth in homosexuality, an increase from an earlier unsubstantiated estimate of 2,900 gays and lesbians in the regions. The report caused a major public debate, backlash, and moral panic against homosexuality that dominated headlines for the rest of the year. Political, religious, and traditional institutions and public figures chimed in on the "growing menace" of homosexuality and vowed to stop what they viewed was a Western imposition on Ghanaian tradition and mores.

The association of HIV with homosexuality was further entrenched when the Ghana AIDS Commission issued a statement claiming that their HIV programs for MSM aimed to educate males about "the dangers of being involved in sex with other men" and that "it is important that all hands are on deck to reduce the number of young people who are lured into MSM."

Shadowing these developments in Ghana were international debates on LGBTQI+ rights in Africa sparked by the introduction of the Uganda anti-LGBTQI+ bill—dubbed the "Kill the Gays" bill—to Parliament, the murder of Ugandan gay activist David Kato in January 2011, and growing abuses against LGBTQI+ Africans. The critics of Uganda and other African nations that criminalized same-sex people were primarily Western governments and human rights organizations. One vocal critic in particular, then UK Prime Minister David Cameron, infamously threatened to withdraw aid from Ghana, a statement that caused more uproar and backlash in Ghana. Ghana's president at the time, the late John Atta Mills, condemned Cameron's threats and asserted Ghana's sovereignty and rejection of homosexuality.

The growing visibility of the LGBTQI+ community and the public disinformation around LGBTQI+ Ghanaians and rights triggered years of attacks against LGBTQI+ people and rights. The proposed hate bill is the latest development in these attacks and efforts of anti-LGBTQI+ forces to gain government support for the repression of LGBTQI+ Ghanaians. In January 2021, Foh-Amoaning's group led calls for the closure of a community space in Accra, Ghana's capital, for LGBTQI+ people, which was also the office of advocacy group LGBT+ Rights Ghana. Just a month after the organization's space opened, it was raided by police and their bank accounts were seized without cause. In March 2021, police crashed a birthday party in the country's Eastern Region and arrested twenty-two  people after receiving a tip that the attendants were holding a lesbian wedding. Later in May, after receiving a tip from a journalist, police in the Volta Region raided a paralegal training session on LGBTQI+ rights and detained twenty-one  rights activists without bail for three weeks. The unsubstantiated charge of unlawful assembly was ultimately dismissed after weeks of coordinated advocacy by LGBTQ+ rights activists and lawyers.

What Is at Stake

The proposed law would increase the frequency and scale of the ongoing attacks and pose serious threats to LGBTQI+ Ghanaians, organizations, and allies, as well as those who service and fund LGBTQI+ people as local rights groups like Ratify Ghana have warned. The United Nations has described it as a "recipe for violence." Passage of the bill would also cause a social and human rights crisis akin to what LGBTQI+ Nigerians and Ugandans have faced since the passage of similar bills into law in both countries and accelerate the growing number of African LGBTQI+ migrants seeking refuge from their home country. Already, the proposed law on LGBTQI+ Ghanaians has spurred an increase in hate crimes and is driving more LGBTQI+ Ghanaians into the shadows. Since July, viral videos have documented anti-LGBTQ+ rape and mob violence, with victims being beaten and assaulted, publicly humiliated, and threatened with death.

The proposed law would also reduce LGBTQI+ people's access to jobs, shelter, health care, worsen mental health outcomes, and jeopardize health funding and programming for LGBTQI+ people, research shows. The health implications are particularly alarming. One of the most concerning and misleading aspects of the bill is its association of LGBTQI+ people with HIV—misusing and misinterpreting health data to justify the criminalization of LGBTQI+ people, and effectively driving anti-LGBTQI+ and HIV stigma. For example, the bill, citing a 2017 integrated biobehavioral surveillance study of MSM in Ghana, wrongly states that "18.1 percent of people living with AIDS are gays." However, the study reports that HIV prevalence among MSM is 18.1 percent, not that 18.1 percent of people living with HIV are MSM—an important difference.

The inaccurate, anti-LGBTQI+ violence, criminalization, and intersecting anti-LGBTQI+ and HIV stigma such as that displayed in the bill reduce LGBTQI+ people's access to HIV prevention and care services and increase HIV risk as studies have shown. Moreover, the proposal to institutionalize LGBTQI+ conversion therapy—an ineffective practice that has been described as a form of torture and denounces by the United Nations—should raise concerns among the country's lawmakers and health leaders. The proposal to force medical intervention on intersex persons—a practice denounced by intersex advocacy groups—is equally cruel.

At the time of our writing, the bill is being reviewed by the Constitutional and Parliamentary Affairs Committee, which has solicited public commentary from organizations and experts who submitted memoranda supporting or challenging the bill. Meanwhile, LGBTQI+ activists in Ghana and the diaspora continue to organize on social media and locally when possible in order to counter false narratives about LGBTQI+ people while raising public awareness of the bill's dangers and historical context, and the bias, bigotry, and misinformation in the media and on social media. Ghanaians in the diaspora have organized demonstrations in several major cities and online calling for solidarity with and stronger legal protections for LGBTQI+ Ghanaians using the hashtags #killthehatebill and #QueerGhanaianLivesMatter. The contrasting silence of social media giants Twitter, Google, and Instagram—which operate in the country—has drawn criticism from the LGBTQI+ community and placed these corporations' commitment to free expression under scrutiny.

Opponents of the bill have also submitted memoranda to Parliament detailing the dangers of passing the bill. However, anti-LGBTQI+ forces remain organized and some Members of Parliament have indicated their support. Moreover, aspects of the bill, like conversion therapy, are already a practice in Ghana that will continue whether or not the bill passes.

Parliament's consideration of this bill reflects a tension between the colonial legacy of homophobia and the country's reputation as a beacon for free expression and self-determination. The same country that in 2019 was recognized as a homecoming touchstone for the African diaspora and chosen home for Twitter in Africa, is driving a growing exodus of its own people. As Parliament reviews the bill, human rights defenders in Ghana and in the diaspora must work with a broad base of allies to defeat it. As Ghanaian artist and LGBTQI+ rights activist Va-Bene Elikem Fiatsi warns, "the bill is a threat to the entire Ghanaian society, even those homophobes who fail to see the extent at which this violence and hate will spread like a bush fire that will catch up with everyone."

The discussion of this hate bill is a pivotal moment in Ghana's history that necessitates collective action to protect the rights, livelihood, safety, and dignity of LGBTQI+ Ghanaians.

Akua O. Gyamerah is an activist and a public health researcher at the University of California, San Francisco whose work examines the multilevel and intersectional determinants of LGBTQ health in Africa in the context of criminalization and other structural violence.


Abena Hutchful is a human rights lawyer at The Young Center for Immigrant Children's Rights in New York, working for immigrant children, including queer youth who escaped LGBTQI+ oppression in Ghana.

Writing a More Inclusive Playbook: How COVID-19 Is Impacting LGBTQ+ Communities Around the World