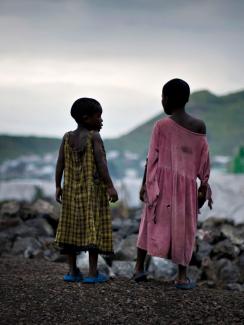 Congolese girls displaced by war stand on the outskirts of a makeshift camp near Goma in eastern Democratic Republic of Congo on February 11, 2009. REUTERS/Finbarr O'Reilly
by Karen Sherman June 1, 2020

There is a refugee camp situated eight miles from South Sudan’s border with Democratic Republic of Congo, a sea of white tents containing the precious remains of lives destroyed elsewhere. Some 8,600 Congolese have lived there for years, nearly 5,000 of them women and girls between the ages of 15 and 59. All had initially fled the Lord’s Resistance Army, a vicious guerilla group led by warlord Joseph Kony.

On a site visit to the camp, I was directed to the admin office for a meeting with camp officials and community leaders, mostly men. Asking the group about the greatest needs for women and girls, the region’s chairlady for women’s issues didn’t hesitate. “Vocational skills are desperately needed,” she urged. “Women need to earn an income.” She also spoke about alcoholism and widespread gender-based violence at the camp. The two were connected.

“Women are human beings, too,” she remarked.

Sheltering in place is hardly akin to life in a refugee camp, yet there are strong parallels to what women in the United States and around the world are experiencing today due to COVID-19.

In Democratic Republic of Congo, more than two million women and girls have been raped over the country’s protracted war

As a long- time international development professional, I spent ten years working with survivors of war in some of the worst places on earth to be a woman. In Afghanistan, the United Nations (UN) finds that 87 percent of women have experienced some form of abuse—at least half of them at home. In Democratic Republic of Congo, more than two million women and girls have been raped over the country’s protracted war. In South Sudan, the warring parties have targeted women and girls with sexual violence as a deliberate means of destroying families and communities.

The hardships and humiliations that women endure on a daily basis in these countries and many others defy comprehension, but this type of gender-based violence and inequality is not exclusive to conflict-ridden nations. Like modern warfare, in which women and children tend to account for the majority of casualties, women have been hit hard by this pandemic.

One in three women and girls—about 1.3 billion worldwide—experiences gender-based violence over their lifetime

Today, violence against women and girls is surging due to COVID-19, more than doubling in some countries, according to the UN. Even before COVID-19 hit, the numbers were staggering: one in three women—some 1.3 billion women and girls worldwide—experience gender-based violence over their lifetime. Elevated rates of assault are likely due to increased economic and social pressures, an uptick in substance abuse, and prolonged confinement in pandemic lockdowns. “Violence against women is its own pandemic,” said Lisa Shannon, CEO of Every Woman Treaty. The group’s newly released Safer Sooner Report calls for a global treaty that sets a clear and enforceable standard for addressing all forms of violence.

The disparities in workload, compensation, and power between the sexes are almost universal as well. Women in South Sudan, like their counterparts everywhere, make up the largest source of unpaid labor, and they have less access to economic opportunities that could better their lives. When they do work outside the home, they are more likely to be informally employed, earning lower wages and with lower job security. In a life-skills training program in South Sudan, for example, I witnessed a session on the value of women’s work. Women spoke of working from early in the morning until late at night, with crushing household food production and domestic responsibilities. Men, however, spent significant amounts of time in leisure activities, like playing cards or drinking.

Violence against women is its own pandemic

Today, COVID-19 is exacerbating the double burden of work and family for many women. In addition to primary child- and elder-care responsibilities, most of the time-consuming household chores are still being left to women, even in the midst of full-time work. “Since the pandemic began and schools closed, 43 percent of employed mothers have said they are primarily responsible for providing childcare, while only 7 percent of employed fathers say the same,” said Marianne Schnall, founder of Feminist.com and What Will It Take Movements in an interview with Melinda Gates.

COVID-19-related job losses are also disproportionately impacting women, who tend to dominate work in the care and service sectors and are often informally employed, which affords them fewer social protections.

The UN estimates that 740 million women globally work in the informal economy. About two-thirds of all minimum wage workers in the United States are women. This could impact women’s labor force participation rates and incomes for years to come, especially for those who are already economically vulnerable. “Women are disadvantaged to men on every global indicator related to economic opportunities,” writes Jeni Klugman, managing director at Georgetown University’s Institute for Women, Peace, and Security. The Institute’s latest index ranks the best and worst countries for women and shows where there are gaps.

2020 is the twenty-fifth anniversary of the UN World Conference on Women in Beijing, where Hillary Clinton famously declared that “women's rights are human rights.” While there has been progress for women worldwide, this pandemic has shed a light on the still glaring inequalities. Chief among them is the fact that women aged 15–44 are more at risk from rape and domestic violence than from cancer, malaria, car accidents, and even war.

In the aftermath of war and conflict, women bear a disproportionate burden to rebuild their homes, families, and countries. Yet the disruption of society also puts women in a position to renegotiate their rights and roles. This happened in Rwanda following the 1994 genocide against the Tutsis. The country now boasts the highest share of women in leadership positions in the world. A police hotline is available to report cases of rape and abuse, and perpetrators receive actual jail sentences. This pandemic could offer women that same opportunity in other countries.

#MeToo has helped to fuel a new global women’s movement, catalyzed by the shared experiences of women across continents and cultures who are demanding the right to live their lives free from violence, in peace and with dignity. The time has come to put women’s personal and economic security at the top of the global agenda. Why link personal safety with economic opportunity? For the simple reason that income brings choices when a woman is suffering from violence or abuse. Women—and the world—can’t wait another twenty-five years.

Karen Sherman is the president of Akilah, an East African institute for women's leadership and career development. She is also the author of Brick by Brick: Building Hope and Opportunity for Women Survivors Everywhere, published in 2020.