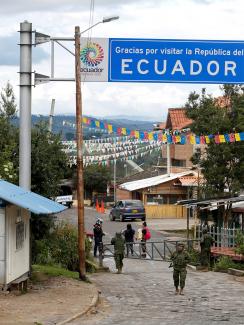 Soldiers guard the Ecuadoran side of a border with Colombia in Tufino, Ecuador on March 15, 2020, after country leaders announced the closure of its borders to all foreign travelers due to COVID-19. REUTERS/Daniel Tapia
by Carlos Javier Regazzoni March 16, 2020

At nearly 700 reported cases as of March 16, both the total number of reported cases of coronavirus in Latin America and their rate of appearance are still low. Until this week, most of the cases were imported from Europe and Southeast Asia, and some experts have thought that the risk of sustained circulation of the virus in the community was low, even when evidence suggested otherwise. In spite of that, the Argentine and Brazilian governments have just announced the first autochthonous cases. Argentina’s health minister has predicted, “it is a matter of days until the virus starts to circulate in the community.” Most health ministers in the region admit the imminent awakening of a full-scale epidemic of coronavirus. The ministry of health of Brazil has said that Rio de Janeiro will probably going to have the highest concentration of cases. Buenos Aires, and São Paolo area could complete the list. Presently, the five most affected countries in Latin America are Brazil, Chile, Peru, Argentina, and Panamá. But cases are rising in others as well.

Local governments, facing varied degrees of public criticism, are gradually starting to implement restrictions on international air travel, prohibitions against large public gatherings, and different degrees of restrictions on school attendance—but they may not be moving fast enough to calm fears. The public is becoming extremely anxious with some of the perceived reluctance in officials to be proactive. The most important newspapers of the region have criticized the relative “inaction” of national governments. From the other side, official positions are logical in face of the colossal measures ahead, albeit action is mandatory. In Ecuador when the number of cases was approaching twenty, President Lenín Moreno declared “National Emergency.” On the other hand, president Andrés Manuel López Obrador from Mexico asked the country to be calm and seems to be reluctant to adopt more radical procedures to control the spread of coronavirus. In Argentina the situation is improving as the president of the country has taken seriously the possibility of an epidemic the size of Italy or South Korea.

What Challenges Lie Ahead

Regarding health care capacity, the scenario is extremely complex. According to the Pan-American Health Organization (PAHO), demographic changes and evolving lifestyles together with unresolved social problems and inequality led to the co-existence of communicable and noncommunicable disease burdens in the region. This explains heterogeneous mortality trends and a redoubled pressure on health care systems. Decades of reform projected to increase equity, effectiveness, and sustainability of public health care systems have been disappointing. Systems are already strained with 270,000 cases of tuberculosis, 2 million cases of syphilis, between 1–2 million cases of Dengue annually, and a current caseload of measles pushing into the epidemic range. These systems could easily be overwhelmed by the appearance of the new coronavirus.

How bad are things already? Emergency departments are overcrowded and even violence against health care workers is not uncommon. According to a recent study, Latin American intensive care doctors have a heavy workload (60 hours per week on average), suffer important limitations due to resource constraints, and frequently express dissatisfaction. Infrastructure is limited, and extra mechanical ventilation equipment and additional personnel could be difficult to escalate. With these meager resources, Latin American countries will have to care for thousands of people in need of advanced respiratory care, a quarter of them or more living in poverty, and many of them in panic.

Countries will have to care for thousands of people in need of advanced respiratory care, a quarter or more living in poverty, and many in panic

Social pressure on a politically fragile environment is another risk. Chile, Brazil, Bolivia, and Argentina have all suffered from social animosity and political unrest. Claims on inequality and social services deficiencies are constantly under the spotlight. A full-scale epidemic, with mandatory quarantines, frequent check points, and economic constrains, could be a dangerous combination. Budgets could be insufficient to solve long-lasting problems of urban infrastructure and health-care services difficulties. Scattered protests should not be surprising. Central governments will have to make concerted efforts to show leadership and efficiency managing such situations.

Lastly, the hammer blows of coronavirus-derived economic downturns will hit the hardest on economies that are already intrinsically weak and least able to sustain the impact. The overall Latin American economy was projected by the International Monetary Fund (IMF) and the World Bank to grow by a meager 1.6 to 1.8 percent in 2020, making it the weakest regional economy in the world.

The overall Latin American economy was projected to grow by a meager 1.6 to 1.8 percent in 2020, making it the weakest regional economy in the world

China ranks as either the first or second-largest trade partner for several Latin American countries, and the reduction of its economic activity will certainly have harsh consequence for the region. On March 2, the Organization for Economic Co-operation and Development (OECD) decreased their global GDP growth expectations worldwide for the year by half a point to 2.4 percent, and Latin America could suffer a 2 percent downturn of its already weak projected GDP growth rate. Primary sector goods and commodities represent the bulk of the region’s exports to China, and these sectors are critical to our economies. Many large contracts are already frozen, or will soon be stopped, causing midterm reduction on investment and consequently further economic contraction.

In this moment, the situation is changing quickly. The biological characteristics of the virus added to a region with a weak health care capacity, secular economic troubles and a tricky political arena have resulted in a blurred future. If the epidemic of coronavirus will reignite unrest because populations perceive long-lasting negligence in the governments, and secular unfulfilled expectations, in the near-term there is a risk of contagion of social turmoil as well.