Go to homepage
Africa and Europe After COVID-19
Governance

Africa and Europe After COVID-19

When the dust of this crisis settles, it will be time to pour a new foundation for EU-Africa relations moving forward 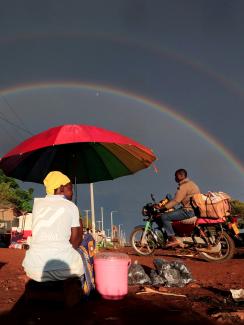 A double rainbow is seen above a woman holding an umbrella and selling snacks along the road in Siaya County, Kenya, on May 3, 2020, in the midst of the coronavirus pandemic. REUTERS/Thomas Mukoya
by Geert Laporte , Sara Pantuliano, Vera Mazzara  May 13, 2020

As the world grapples with the global challenge of COVID-19 and nations start to think about how to rebuild from the crisis, the European Union (EU) should look beyond its borders and deliver the global leadership required—particularly in relation to its closest neighbor, Africa. In March, before the pandemic took hold, the EU outlined a long-awaited new Africa strategy with the ambition of forging a “partnership of equals.” Coronavirus will be the first major test of this ambition.

Africa is of particular concern to us

As the EU’s Minister for Foreign Affairs Josep Borrell said, “If we don’t solve the problem in Africa, we will not be able to solve the problem in Europe. Africa is of particular concern to us.” The European Think Tanks Group, Europe’s leading network of international cooperation and sustainable development think tanks, calls on the EU to look beyond its own economic recovery, work with Africa to avert the worst effects of the crisis, and craft a new partnership for the longer term. The coronavirus crisis provides an opportunity to finally transform the old paradigm of donor-recipient aid relations toward a model of genuine international cooperation between Africa and Europe.

To lay the foundations for this cooperation, the EU should first support an economic stimulus package for Africa. Although the health effects of the pandemic have not yet hit Africa as hard as Europe, the costs to economies and livelihoods could be enormous. The collapse of oil and commodity prices will have a devastating impact on several countries that depend on them for more than half of their exports. Sectors that depend on demand from Europe’s consumers—from hospitality to agriculture—are reeling.

African finance ministers have called for an economic stimulus in excess of $100 billion to curb the virus’s impact. Our analysis shows that the average stimulus is fifteen times higher in European countries than in poorer African countries. The decision of the EU Foreign Affairs Council to reallocate €15 billion from existing budgets to partner countries is a welcome step, but much more is required to offset the virus’s social and economic impact, particularly in the areas of debt relief, provision of emergency soft loans, and substantial financial aid. The EU should give its fullest support to multilateral forums such as the Group of Twenty (and its recently announced global action plan), the International Monetary Fund, and the World Bank, and to initiatives by the African Union (AU) and the African Development Bank.

Next, the EU should work with Africa to rebuild economies in a climate-compatible way. Our recovery from the most significant economic crisis since the Great Depression of the 1930s provides an opportunity to take a giant leap toward a low-carbon and climate-resilient future across both continents. It is Europe’s responsibility to stimulate economic recovery guided by equitable and environmentally sustainable plans, including national climate change strategies and the EU’s recently launched European Green Deal.

The focus should be on micro-, small, and medium enterprises that create jobs for a rapidly growing and underemployed population

Reconciling transition toward climate-compatible economies with growth and pro-poor development policies creates a significant challenge for Africa. In its ambition to imitate China, the EU has in the past overemphasized investments in extractive industries and infrastructure in Africa. This emphasis has increased debt, dependency, and vulnerability and reduced resilience to economic and environmental shocks. The post-pandemic economic recovery is an opportunity to diversify investment to support sustainable African domestic economies rooted in green technologies and local value chains. The focus should be on micro-, small, and medium enterprises that create jobs for a rapidly growing and underemployed population.

Inevitably, the question will be raised whether strong and effective public policies could best be achieved through liberal (democratic) or illiberal (authoritarian) governance models. Some governments could use the crisis as a pretext to postpone electoral processes sine die. Lack of progress in tackling poverty and inequalities, in combination with freedom-restricting measures, could become an explosive cocktail for political destabilization. Restoring governance agendas in the EU-Africa dialogue requires a new approach, with greater sensitivity, realism, and acknowledgement of different historical and political contexts. Reciprocity will also be essential, for example by inviting observers from the African Union to electoral processes in EU member states.

Together with Africa, the EU should tackle the weak underbelly of globalization. The major shortages of strategic stocks of medical equipment in several countries throughout this pandemic have highlighted an overdependence on global supply chains and just-in-time production models. Although the integration of the global economy is inevitable and should continue, Africa and Europe should also reduce external dependency on global markets. This experience of shortages and supply chain problems should inspire both the EU and the African Continental Free Trade Area to prioritize the construction of a common internal market over global supply chains going forward.

When the dust of this crisis settles, it will be time to seize the opportunity to build a new foundation for EU-Africa relations.

EDITOR'S NOTE: The authors wish to acknowledge the following people from the European Think Tanks Group, a network of independent think tanks working on international cooperation for global sustainable development, who contributed to this article.


Sara Pantuliano is chief executive at the Overseas Development Institute, where she earlier served as managing director and director of humanitarian programs.


Vera Mazzara is the coordinator for the European Think Tanks Group, a network of independent think tanks working on international cooperation for global sustainable development.