What the African Medicines Agency Needs Most to Succeed 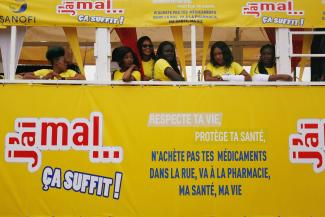 Girls ride in a truck as they participate in a campaign to raise awareness about illegal and false drugs in Abobo, a suburb of Abidjan, Ivory Coast, on October 11, 2018. REUTERS/Luc Gnago
by Michelle D. Gavin December 16, 2021

In early November, the treaty establishing the African Medicines Agency (AMA) entered into force. The formation of the AMA marks a significant milestone in a long-germinating effort to improve the safety and efficacy of medicine available in Africa and, more broadly, to improve trust and reliability in Africa’s pharmaceutical sector. The AMA is a welcome new addition to African health governance, but there are important limits to its ability to address underlying issues that fuel mistrust and undermine health efforts on a continent comprised of fifty-four countries. Ultimately, realizing the promise of the AMA will require attention to governing capacity and integrity at the national level.

Africa has the highest prevalence of falsified, outdated, and substandard medicines of any region in the world. These dubious drugs are killing people; some estimates suggest that more than 280,000 children in sub-Saharan Africa die every year due to the use of falsified or substandard medicines for pneumonia and malaria. The COVID-19 pandemic has generated even more fake drugs and medical supplies. In June, South African authorities seized 2,400 doses of fake vaccines and counterfeit 3M-branded N95 masks worth almost $450,000; national and international health authorities have also sounded the alarm about fake COVID vaccines in Nigeria, Kenya, and Uganda. In addition to outright fakes, substandard medicines can also enable the rise of drug-resistant strains of disease. These counterfeit, expired, and defective drugs give the public good reason to doubt the veracity of scientific claims about the safety and value of medicines. Experience teaches many in Africa that medicines cannot be trusted.

A History of Distrust in Medicine

Skepticism is the result of more than just dodgy drugs. There is also a history of unethical medical practices in Africa, and no new institution can restore the trust eroded in this regard. From German experiments on people from Namibia and South Africa in the early 1900s to Pfizer’s notorious 1996 clinical trial of an experimental antibiotic given to children in Kano, Nigeria—that a panel of experts hired by the Nigerian government later concluded was illegal and did not meet standards of informed consent—the historical record does not inspire confidence in the ethics of high-income countries, or their respect for African lives. This history informs concerns so powerful that they helped to shape former South African President Thabo Mbeki’s disastrous flirtation with AIDS denialism—leading to hundreds of thousands of premature deaths in one of the world’s HIV hotspots—and feeds into Africans’ hesitancy when it comes to COVID-19 vaccines today.

Distrust has spilled over into how people view COVID-19 vaccines. When Afrobarometer conducted surveys in fourteen African countries earlier this year, they found that on average only 37 percent of citizens trusted their government “somewhat” or “a lot” to ensure the safety of COVID-19 vaccines. Part of this is about experience and history, but another is about how African citizens feel about their own governments and officials. Polling shows that levels of trust in government authorities vary widely from country to country, but they are consistently tied [PDF] to whether people believed an institution to be corrupt or self-serving.

Skepticism is the result of more than just dodgy drugs, there is also a history of unethical medical practices in Africa

Official misuse of funds intended for combatting COVID or relieving the economic strain caused by the pandemic has generated headlines in many African countries, including Malawi, Cameroon, Kenya, Nigeria, South Africa, Uganda, Zimbabwe, South Sudan, Ghana, and the Democratic Republic of Congo. Onerous restrictions on daily life, combined with economic hardship and the spectacle of people in positions of public trust enriching themselves in the midst of crisis, have dealt a real blow to public confidence in health governance.

This matters for the AMA, because ensuring that standardized regulations deliver for Africa will require effective and predictable enforcement of those regulations by the very governments that have been sowing mistrust among their populations. Governing capacity, which varies quite widely among African Union member states, depends on the integrity and competence in the civil service and law enforcement agencies within countries. There are places where this is in abundant supply, but in many states the civil service is overstretched and under-resourced. These public servants are up against the forces behind the world’s most lucrative trade in illegally copied goods, estimated to be worth some $200 billion annually. The AMA can help harmonize rules across countries, but they will remain aspirational without meaningful investments in and attention to state-level capacity to follow and enforce them.

Despite the challenges and limitations, the creation of the AMA is a significant step forward that can be an important part of the effort to strengthen Africa’s health sector. The most optimistic vision for the AMA it is that it will incentive more robust pharmaceutical supply chains in Africa, thereby creating jobs and opportunity for innovation closer to home.

The COVID-19 pandemic has revealed glaring inequities in global access to new vaccines—nowhere more so than in Africa, where only 8 percent of the population has been fully vaccinated to date. These disparities have reinvigorated efforts to increase pharmaceutical manufacturing on the continent. Room for growth is vast: Africa currently imports more than 80 percent of its medicines and medical supplies. Capital outlays to help build the infrastructure for more robust African pharmaceutical production become far more commercially attractive when one set of standards and regulations apply, rather than over fifty different rulebooks.

Ambassador Michelle D. Gavin is Senior Fellow for Africa at the Council on Foreign Relations and former U.S. Ambassador to Botswana

The Africa We Want: Protecting Health and Livelihood

10 Good Things That Happened in Global Health in 2021

There were milestones and moments to celebrate, despite the shadow of COVID-19