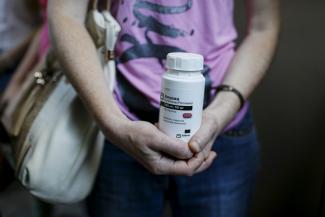 An activist holds an empty bottle of Aluvia, an HIV antiviral medication, at a rally in front of the building for the Cabinet of Ministers of Ukraine in Kiev, Ukraine, on July 1, 2015. REUTERS/Gleb Garanich
by Spencer Feingold May 6, 2022

For the past 15 years, Ukraine has had one of the largest and most successful HIV responses in Europe, according to the Joint United Nations Program on HIV and AIDS (UNAIDS). But as the war in Ukraine continues into its third month, the health of people living with human immunodeficiency virus (HIV) and acquired immunodeficiency syndrome (AIDS) is at risk as they face reduced access to medications and testing.

Health experts warn that the war could serve as a major setback to Ukraine's progress combating the virus.

Prior to the war, Ukraine was home to an estimated 260,000 people living with HIV

"The disruption to treatment services puts people’s lives on the line and risks a resurgence of the country’s HIV pandemic," says Eamonn Murphy, UNAIDS’s deputy executive director and head of humanitarian response.

Despite a long and sometimes challenging effort to curb steep rates of transmission, Ukraine has made progress in recent decades mitigating the spread of HIV and providing HIV health-care services. The country went from recording an estimated 31,000 new HIV infections in 2000 to less than 10,000 in 2020. Meanwhile, the percentage of people living with HIV and receiving antiretroviral therapy (ART)—a combination of medicines that can slow the progress of HIV—rose from just 10 percent in 2010 to nearly 60 percent in 2020.

The Ukrainian government also recently boosted its funding for HIV care and prevention. In 2020, the state stepped in to cover 80 percent of national HIV services, which were previously covered by international donors and health organizations.

Now, my city is ruined. Now, I cannot get my HIV medication. I am afraid that I will soon become resistant and will have to change my treatment

A 28-year-old Ukrainian living with HIV

Yet Ukraine, which prior to the war was home to an estimated 260,000 people living with HIV, has been under heavy bombardment since Russia invaded in February 2022. Several thousand civilians have died in the war to date and the violence has displaced more than ten million. The war has also caused severe shortages of vital basic needs, from food to medications, including antiretroviral therapeutics.

“[Antiretroviral] therapy is a very powerful HIV-prevention tool,” Raman Hailevich, the UNAIDS country director for Ukraine says. “In localities that are now occupied and controlled by the Russian armed forces and areas that are sites of active fighting, there is no reliable way of delivering the medication.”

ART is required daily in order to impede HIV's ability to replicate in the body. This lowers a person's viral load and allows the immune system to function more normally, decreasing the chance of transmission. However, interruptions to ART can create a resistance to the drugs, rendering the therapy useless.

An estimated 152,000 people living with HIV in Ukraine were on antiretroviral therapies before the war. As of early April, UNAIDS said more than forty health-care facilities that provide the medication have either been closed or have lost contact with the agency. In one instance, a shipment of antiretroviral therapies intended for children living with HIV failed to reach Kyiv after the delivery car was destroyed in an attack.

In March, AFEW, a public health organization serving populations at risk for HIV and other diseases in Eastern Europe and Central Asia, interviewed several social workers and people living with HIV across Ukraine, with one 28-year-old stating: "Now, my city is ruined. Now, I cannot get my HIV medication. I am afraid that I will soon become resistant and will have to change my treatment regimen, which will be detrimental to my health."

In response, several countries and international organizations have mobilized and increased coordination with government agencies and nongovernmental organizations to provide medical aid. In early March, the Global Fund, an international organization dedicated to fighting AIDS, tuberculosis, and malaria, released $30 million to support HIV testing and care services in Ukraine. Meanwhile, the United States has allocated $13 million in emergency funding to supply Ukraine with more HIV medication and has supported efforts to deploy mobile HIV testing vans.

"Medical supply chains have been disrupted," Tetiana Astakhova, Doctors Without Borders' (MSF) advocacy manager for Ukraine says. MSF, which has been combating HIV in Ukraine for years, activated emergency response operations at the onset of the war, deploying teams across the countries to provide aid and access to medication.

"Civil society and international humanitarian aid organizations are making a huge effort to fill in the gaps, but attention must not be lost on the issue," Katrin Hugendubel, advocacy director for the LGBTI advocacy group ILGA-Europe, says. "A resurgence of the epidemic is possible if disruptions in treatment go on for too long, most particularly among marginalized people like men who have sex with men and trans people."

The World Health Organization estimates that 30,000 refugees are in need of HIV medication

Since the war began, more than 5.7 million people have fled Ukraine, reports the United Nations High Commissioner for Refugees, creating a major refugee crisis in Central Europe. The World Health Organization estimates that 30,000 refugees are in need of HIV medication.

In Germany, Berliner Aids-Hilfe, a nongovernmental organization working since the 1980s to combat HIV and AIDS, says its Berlin-based team has been providing housing assistance, medical care, hospital referrals, and translation services to Ukrainian refugees with HIV since the war began.

"People arrive with only a few days' or weeks' worth of medication," Sergiu Grimalschi, a linguist and migration specialist at Berliner Aids-Hilfe says. "The first and most important thing to do is get them access to medication." Those in need, Grimalschi added, include HIV-positive refugees as old as eighty-two and as young as ten and eleven.

At the onset of the Russian invasion, Ukraine barred men aged eighteen to sixty from leaving the country as part of its military mobilization efforts. The move forced many people with HIV or at risk of HIV transmission to remain in the now war-torn country.

"It is hard to make a precise quantification at this stage," Hailevich said about the consequences the Russian invasion is having on Ukraine's efforts to curb HIV. But "the longer the war goes on, the greater the impact."

Spencer Feingold is a senior editor at the Council on Foreign Relations.