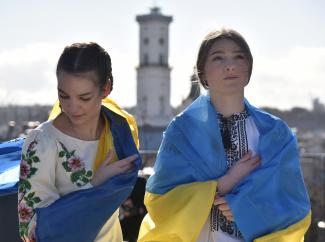 Young women wear national flags during the Unity March, which is a procession to demonstrate Ukrainians' patriotic spirit amid growing tensions with Russia, in Lviv, Ukraine, on February 19, 2022. REUTERS/Pavlo Palamarchuk
by Lillian Posner February 24, 2022

Since Russia annexed the Crimean Peninsula and invaded Ukraine in 2014, almost 1.5 million people from Crimea and Donbas have been forcibly displaced to safer parts of Ukraine and Poland. Over 14,000 Ukrainian soldiers and civilians have been killed in the fighting. Those who have remained in Crimea and Donbas have often been the target of violence and oppression, particularly the Crimean Tatars who are religious and ethnic minority indigenous people from the peninsula.

The conflict has taken a turn for the worse this week with Russia's announcement to recognize the breakaway territories of Donetsk and Luhansk, which together make up the coal mining region of Donbas in eastern Ukraine. Russia’s missile strikes on Ukraine's major cities woke Ukrainians in the middle of the night on Thursday and impelled many to pack their bags and leave. The ongoing invasion is likely to displace thousands, if not millions, more. Grappling with the trauma of conflict and displacement is an ongoing process, particularly as people's lives are still being upended. But the war has also inspired Ukrainians to pick up their pens and cameras and create.

In his recent speech, Russian President Vladimir Putin attempted to erase the lines between Russian and Ukrainian culture. But Ukrainian culture is distinct, alive, and vibrant. Here are six books and movies that put a human face to the war and can serve as a balm for the wounds created by conflict.

In Isolation: Dispatches from an Occupied Donbas

What is life actually like in the Russian-occupied territories of Donetsk and Luhansk? Stanislav Aseyev's forthcoming book, In Isolation: Dispatches from Occupied Donbas, to be released in March 2022, offers a window into the lived experiences of people under occupation. Even as the war displaced thousands of his neighbors, Donestk-native Aseyev stayed behind to report on the conflict on the ground. A truly talented writer, Aseyev gives an eye-witness account of rockets being fired from children’s playgrounds, his grandmother's confusion at having to participate in sham elections, and the terrible lawlessness of life in an unrecognized state run by ISIS-like militants. Although the people of Donbas are constantly inundated with Russian propaganda and expressions of Ukrainian patriotism are brutally punished, Aseyev gives voice to the significant contingent of Donbas natives who still identify with Ukraine. Dispatches is a compilation of his reporting from 2015-2017, when Aseyev was kidnapped, tortured, and imprisoned by Russian militants for writing the articles contained in this book.

The Torture Camp on Paradise Street

Fortunately, Aseyev was released from prison in 2019, after almost a thousand days of psychological and physical torture in one of Donetsk's most infamous prisons. The torture camp, named "Isolation" still exists in a requisitioned building that used to house the Donetsk art museum. Aseyev's second book, The Torture Camp on Paradise Street (the prison is literally on Paradise Street), is the harrowing account of his time as a political prisoner. And while brutal to read, it also contains fascinating anecdotes about a dramatic prison escape, women in prison, and the power of even small acts of kindness.

The Earth Is as Blue as an Orange

Acclaimed documentary The Earth Is as Blue as an Orange also tells the story of those who have chosen to stay in Donbas despite the tremendous danger. A kind of film within a film, director Iryna Tsikyk follows a family who is making its own movie about their life on the front lines of the conflict. The film follows single mother Anna and her four children as they try to find joy in cinematography while bombs explode around them. While their neighbors' homes are shelled in the night, this brave and funny family makes their home a sanctuary, celebrating birthdays and film school admissions, and shooting interviews by candlelight from their bomb shelter. The Earth Is as Blue as an Orange is an uplifting story about the bonds of art and family even in the most dangerous of circumstances.

Gray Bees is just the latest of many excellent books by Andrey Kurkov, one of Ukraine's most prolific authors, known for his dark humor and surrealism. The book tells the story of beekeeper Sergei Sergeyich who lives in the "gray zone" of occupied Donbas. Sergei's village has been all but decimated by the shelling, leaving him all alone except for his bees and one neighbor. Sergei also ventures out of his own gray zone to another, that of Crimea. There he hopes to find an old friend and fellow beekeeper, Akhtem. Upon his arrival, Sergei learns that Akhtem has been missing for two years, an allusion to the state repression facing Crimean Tatars living under Russian occupation. Kurkov deliberately deprives the reader of color, marking the contrast between life in the "gray zone" and what came before. But he also exposes the reader to the vibrancy of the Tatar culture that remains in Crimea. Although the book focuses on some bleak realities, his humor and style dull the edge and force you to laugh all the same.

Based on a true story, this 2013 period drama tells the story of Amet Khan Sultan, a World War II fighter pilot who was named Heroes of the USSR for his service in the Soviet Red Army. The movie takes place in Crimea in May 1944. Sultan and some of his fellow soldiers, who are Russian, are granted leave to visit Sultan's family and are treated to the full splendor of Tatar hospitality. The movie is a celebration of Tatar culture, named for a traditional dance that is performed beautifully in the movie.

But the celebration is brought to a screeching halt when Stalin announces the forced deportation of over 200,000 Tatars who are accused as an ethnic group of collaboration with the Nazis. Sultan and his Russian friends fight back as Tatar families are loaded into cattle cars and deported to Soviet Uzbekistan. Tens of thousands died en route and due to brutal conditions in exile. The deportation was followed by an intense campaign of cultural erasure and the over 80,000 homes left abandoned were granted to other Soviet citizens. The Tatars were not permitted to return until the 1980s. The movie, directed by Crimean Tatar filmmaker Akhtem Seitablaiev, is banned in Russia, but you can stream it on AppleTV.

Vladimir Putin has claimed at various junctures that Ukrainian is not a distinct language and has used the defense of Russian-speaking people as a justification for his invasion of Ukraine. Mondegreen: Songs About Death and Love is a beautifully crafted counterargument to that point. The book, although fiction, draws heavily from the experience of the author, Volodymyr Rafayenko, a native of Donetsk who grew up speaking Russian. Rafayenko was displaced by the war in 2014 and moved to Kyiv, where, as a Russian speaker, felt himself to be both a victim of the war and in a strange way, somewhat responsible.

Rafayenko took it upon himself to learn Ukrainian, and although he has written many other novels in Russian, Mondegreen is his first Ukrainian-language novel. Its English translation will be available in March 2022. The book explores themes of language, displacement, and memory through the eyes of Haba Habinsky, a refugee from Donbas who builds a new life in Kyiv and learns Ukrainian. The book, written in an experimental style, is riddled with plays on words and interpretations. A mondegreen is something that is heard improperly by someone who then clings to that misinterpretation as the true meaning. The book is a probing exploration into selfhood when faced with displacement and a testament to the resilience of Ukrainian identity.