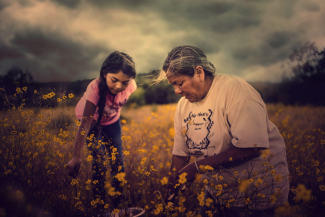 The beautiful documentary film "Gather" makes you feel close to the earth as it pans across golden fields, flourishing farm plots, placid rivers, and peaceful plains scattered with buffalo—the ancestral food sources of Native American tribes. But it's so much more than a pretty film.

The documentary, set to release on Netflix for the first time on November 1 (though its original release was in 2020), follows five Native Americans on their journeys to educate their communities about the importance of reclaiming their foodways. Part of that education, says director Sanjay Rawal, is understanding the devastating history of colonialism and how it destroyed the food traditions of Native Americans, along with their health.

"The story of ‘Gather’ is really the story of capitalism," says Rawal.

The United States' agricultural-based economy drove the development of the country, Rawal says, and the wealth of many U.S. families and industries was built off of two things: stolen land and enslaved people.

"You want to attack a people and wipe them out, attack their food," says Nephi Craig, from the White Mountain Apache community in Arizona, early in the film. A chef, Craig is the founder of the Native American Culinary Association, and in 2020, also launched Café Gozhóó, a restaurant and nutritional recovery clinic in Whiteriver, Arizona.

"You want to attack a people and wipe them out, attack their food"

Gather focuses on the current state of food sovereignty—a term with roots in the group Via Campesina, a self-described peasant organization in Guatemala. The concept generally is described as the right of people to freely define their own food and agricultural policies. It’s now an idea that has been adopted by international organizations, including the United Nations.

"What's now happening against a much larger legal and environmental framework is the rejuvenation of food systems and the development of an idea that has been discussed in Indigenous communities for about 30 years now," Rawal explains.

In the film, Clayton Harvey, from the White Mountain Apache community, talks about how farming healed him after years of unhealthy behaviors. He now manages Ndée Bikíyaa, the People's Farm, which supplies produce to schools and other outlets, like Café Gozhóó. As a young boy, he said he wanted to escape farming and "the rez."

"Now, I live and breathe food sovereignty," he says as he plants seedlings.

"Gather" also follows activist Samuel Gensaw, an enrolled member of the Yurok Tribe in Northern California and a co-founder of the Ancestral Guard, a group that teaches younger tribe members about their food ancestry by taking them to the Klamath River where their ancestors fished. But his story is also crushing as the movie explains that a dam built by the government has cut off the tribe's salmon supply. But Gensaw is connecting with other tribes across the country, and Indigenous communities around the world, building solidarity and hope.

The film is educational, emotional, and empowering and it's gained a broad swath of interest. Rawal says they didn’t expect it to garner as much interest as it did outside of Native American communities.

"Our notion is that for non-Natives who watch the movie, it's important to understand that in almost every region of the world where Indigenous people live and exist, they have the ability to lead policy and advocacy," Rawal says.

For more information on the movement for Indigenous Food Sovereignty visit nativefoodsystems.org.