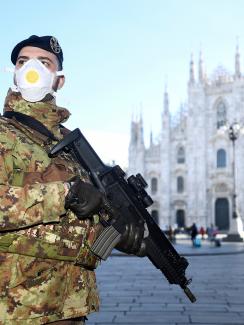 Military officers wearing face masks stand outside Duomo cathedral in Milan, Italy on February 24, 2020. The cathedral was closed by authorities due to the coronavirus outbreak. REUTERS/Flavio Lo Scalzo
by Luke Shors February 26, 2020

It’s official: the world has declared a medical "war" on Coronavirus. China’s Vice-Premier Sun Chunlan recently described China as facing "wartime conditions”—echoing what the Chinese State Media has described as a “People's War.” She then extended the metaphor, adding ominously that “there must be no deserters, or they will be nailed to the pillar of historical shame forever.” Indeed everything in Wuhan does look like a war, from door to door identification and rounding up of patients, check points and the overall shutdown. Nurses being sent to Hubei province are having their heads’ shaved and described as female warriors by both state media and critics of the government alike.

As cases spread to other nations, governments around the world have praised China’s response and have suggested emulating China’s martial response to the outbreak. Yet caregivers and those they care for are not soldiers or enemy combatants who may desert. They are facing deeply personal loss and hardship. By using the rhetoric of war we may unconsciously adopt positions that are counterproductive to our goals when responding to this outbreak and miss opportunities for containment not in line with a war mentality.

The world has waged many medical wars, on cancer, Alzheimer’s, mental illness, polio, and smallpox—to name a few. Some of these have been formally declared by governments—such as the U.S. war on cancer declared by President Nixon and codified through the 1971 National Cancer Act or Singapore's 2016 declaration of war against diabetes. President Nixon also famously declared another metaphorical war: the war on drugs. Many more public health "wars" have been tacit and apparent only in the language used to describe them: health care workers on the front lines, patients battling illness and aggressive treatment strategies. Metaphorical wars on illness have even taken place in the context of actual wars as demonstrated by the recent headline, “Meet the Ebola workers battling a virus in a war zone.”

The public health and research community might be inclined to dismiss these wars as being waged by politicians and not scientists. Yet a search of the medical database PubMed of terms such as "battle" or "frontline" over the last ten years alone yields tens of thousands of citations—demonstrating that many scientists, health researchers and practitioners have internalized the metaphor of medical wars and its associated lexicon.

While some of these terms, such as frontline, may be used synonymous with first line when referring to a type of treatment, in many other instances the rhetoric still retains its overt military framing. For instance, a recent medical journal article on a new innovation in diabetes mellitus is titled “Potential Weapon to Sharpen our Battle against DM.” Such titles are easy to come by and demonstrate how researchers and scientists also wage medical wars.

We should be concerned about the use of these metaphors from all parties because they distract from community approaches and evidence based practice. War metaphors lead to reactive rather than reflective actions and can be used to serve ulterior motives or political interests. One example is the war on drugs. Some have claimed that this "war" was not undertaken in the public interest but as a way of marginalizing Nixon’s two chief political opponents: antiwar protestors and blacks.

Research from a variety of disciplines, including behavioral economics and social psychology, demonstrates that metaphorical framing has consequences. Recent research has demonstrated that the metaphorical framing of a problem influences the decision space of solutions. For instance, work by Larson critiques war metaphors in the field of ecology and shows the power of labeling species as invasive. Making the species the enemy versus recognizing that invasive species are a consequence of human activity and migration leads to short-sided policy approaches and efforts that are not sustainable. These species are not invaders but hitchhikers.

Meanwhile, Thibodeau and Boroditsky find that the inclusion of a single metaphor namely, crime as a virus that infects or plagues cities or a beast that preys on and attacks cities, shapes respondent groups’ assessment of how cities should respond to crime. Participants were less inclined to prioritize community responses such as investing in after-school programs if the issue was framed in terms of a “beast” even if all other factors and data in the scenario were held constant. The authors summarize their findings:

The influence of the metaphorical framing effect is covert: people do not recognize metaphors as influential in their decisions

“Interestingly, we find that the influence of the metaphorical framing effect is covert: people do not recognize metaphors as influential in their decisions; instead they point to more “substantive” (often numerical) information as the motivation for their problem solving decision. Metaphors in language appear to instantiate frame-consistent knowledge structures and invite structurally consistent inferences.”

In so-called medical wars, one probable result of this metaphorical framing is to narrowly focus the effort on the disease itself—and not its causes or downstream effects.

With non-communicable diseases, focusing efforts on prevention is typically more cost-effective than treating the disease itself. In the case of a disease like Alzheimer’s, declaring the illness itself as the enemy may close us to sociocultural dimensions of the problem.

Additionally, people who suffer from it may not want to see themselves as engaged in a battle against their illness. Other people may wish to frame their experience and illness narratives in different ways—for instance as a journey. And recently a growing group of authors have questioned the wisdom of a win-at-all-costs mindset that comes with battles and wars. This has played out most poignantly in the case of some people who suffer from terminal cancer—where despite a poor prognoses for survival they may opt to continue aggressive treatments rather than consider the opportunity for palliative approaches that focus on quality of life.

Getting the Battle Gear on in China

None of this is to underplay the severity of the situation in China, Italy, Iran, South Korea, and other places. However even in the case of COVID-19, buying into a war framing may undermine control efforts. When a public health crisis becomes a war, then the “generals” often become political leaders rather than infectious disease experts. Outbreak responses are greatly helped when people who are sick self-report their symptoms to the authorities, but their willingness to do so may also depend on their fundamental trust of those in charge—something that a martial environment undermines.

War footing places a premium on secrecy as opposed to cooperation. The same hierarchies of war and battle can suppress the open dialogue that is necessary to find relevant solutions and lead to public backlash. Thus the muzzling of Li Wenliang, the doctor who first raised the alarm about coronavirus and who ultimately died from COVID-19, led to widespread outrage on social media in China. And the Chinese government’s press releases show a media strategy aimed at “vividly conveying the stirring achievements from the front lines of epidemic prevention” even as they have sought to control the discourse and limit sharing of information. In reality, there is no true frontline with a viral enemy—epidemics spread in networks. China has not only restricted speech but the movement of hundreds of millions of people. Meanwhile, medical workers have written moving pleas for equipment and support. Their ineffective face masks both literally mute their voices and the state media mutes their other requests for support.

Wars on coronavirus also make us forget that other wars on infectious diseases have emanated from similar circumstances: “Battling SARS on the Frontlines” was typical headline during the 2003–2004 outbreak. Identifying the pathogen as the enemy allows us to ignore the complex epidemiological circumstances that promote these outbreaks and the under-resourced health systems that are tasked with disease containment. Urbanization, poverty, humans living in close proximity to animals, systems of government that undercut transparency, and a globalized world are some of the many factors that contribute to these outbreaks. Focusing on the pathogen may be easier than addressing these more complex and politically contentious challenges. As pathogens have no lobby groups, they become easier scapegoats than the underlying causes that support their emergence.

Furthermore, perhaps the single most effective approach to preventing viral spread—handwashing—is not consistent with a siege mentality. The threat of the enemy too imminent to remember the tried and true approaches such as having children sing "Happy Birthday to You" twice while washing hands with soap in order to ensure handwashing is thorough.

What I am saying, in the end, is that it's critically important for scientists, public health experts, and the public at large be cognizant of the metaphorical framing that is being used and its potential effect on our thinking. Viruses do not strategize against us and plot our downfall any more than a flooding river plots to drown people in an inundated community. Zoonotic infections like the novel coronavirus threaten humanity instead because they arise through natural selection and mutation. Imbuing viruses with intent to hurt us makes no more sense than yelling at a rock one accidentally stubbed one’s toe against.

Coronavirus is the latest of these challenges, but it will not be the last

Meanwhile, the increased incidence of non-communicable diseases is a consequence of changes in lifestyle and increased longevity and again is not an enemy at our gates. In these cases, focusing on defeating the “enemy” makes us lose sight of the more cost-effective preventive strategies. There are many global health challenges that require our effort, expertise, resources, and creativity to address. Coronavirus is the latest of these challenges, but it will not be the last. Importantly none of these public challenges are true “wars” with an enemy intent on harm.

Not being aware of this language and not questioning military metaphors in global health makes us susceptible to supporting the logical consequences of that metaphorical frame. In doing so we risk closing ourselves off to the most appropriate, effective, and compassionate responses.

Luke Shors is a researcher and writer who focuses on global health and climate. He is a co-founder of the carbon removal initiative Capture6