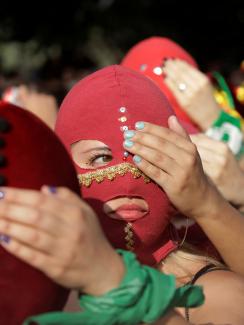 In Almassora, near Valencia, Spain, a woman named Carina was stabbed to death by her husband in front of their two children on March 19—less than a week into the country's lockdown. In Wilson Borough, Pennsylvania, on March 30, thirty-eight-year-old Roderick Bliss IV, who was distraught over losing his job during the coronavirus pandemic, shot his forty-three-year-old girlfriend and himself. Women’s groups in Argentina warned in May that the number of women killed has reached a ten-year high, with more than fifty femicides in less than two months during the lockdown. In June, murders of three women in South Africa sparked outrage, including over twenty-eight-year-old Tshegofatso Pule, who was eight months pregnant and found stabbed and hanging from a tree—just as lockdowns were being lifted.

COVID-19 has unleashed a wave of international concern for increasing violence inside the home. Media reporting on family violence worldwide has skyrocketed, the United Nations secretary–general called for an urgent domestic violence “ceasefire,” and nearly 140 governments have signed a pledge re-affirming their support to survivors within the COVID-19 response. But is this too little, too late?

Violence, including female homicide, is often being reported as “caused by the lockdown” or “caused by COVID-19.” Experts know this is not the case. Inequalities in gendered power dynamics and toxic masculinities faced by many women and children around the world are historical, persistent patterns. Approximately one in three women around the world experience physical and/or sexual intimate partner violence in their lifetimes. Nearly four in every ten female homicides are committed by an intimate partner, and upwards of 50 percent of children experience violence, often in settings presumed to be safe: the home and at school. Violence against women and girls to households, communities, and the overall economy has been estimated to cost nations billions of dollars. While the #MeToo movement galvanized an upswell in support and action around sexual violence and harassment, impunity for perpetrators is still widespread and justice is an uphill battle faced by most survivors. COVID-19 may have unveiled and intensified family violence, but for many focused on the issue it has only reaffirmed what we already knew: for too many women and children, home was never a safe place.

Yet in some countries COVID-19 has stepped up the response to family violence. Across the globe countries are expanding helplines and online support platforms. In France, a $1.2 million funding increase for anti-abuse organizations included 20,000 hotel nights for survivors to escape abusive partners. Countries such as Italy and the United Kingdom have released improved apps by enhancing security so that no trace of content is recorded and by enabling women to contact authorities silently via message or image, thus allowing survivors to seek help even when confined with abusers. Greenland has banned alcohol sales in its capital Nuuk to reduce the risk of violence against children in the home. And Australia has implemented a number of modifications to family law to allow the justice system to better respond to cases during quarantine. But these initiatives are a drop in the bucket, and the amount of funding dedicated to the response is insufficient.

Funding for violence against women and girls makes up a tiny proportion of overseas development assistance—0.002 percent

At a global level, funding for violence against women and girls makes up a tiny proportion of overseas development assistance (estimated at 0.002 percent)—and an even smaller proportion of that reaches civil society and feminist organizations working in the global south. Women’s groups and social welfare resources have been critically underfunded, contributing to a cycle of resource depletion and inability to leverage the power of key change agents at a local level. Some 146 UN member states and observers have signed a pledge statement affirming the importance of combatting family violence, but this pledge needs to be backed by financial resources to meaningfully move the needle on this agenda.

Research spanning decades shows that significant reductions in violence are possible, and multisectoral efforts, including the women’s movement, are key contributors. Top academic leaders who study domestic abuse agree that now is the time to come together and embrace the large and growing body of knowledge around what works. We need to address key drivers of gender inequality, harmful social norms and unequal power—as well as tackle structural drivers that mitigate risk, including investments in girls’ education, social protection, and women’s economic opportunity. These are actions ripe for engagement now during COVID-19 and over the long-term, when attention may shift away from family violence.

The COVID-19 crisis has shone a spotlight on the ugly truth of violence against women and children. This is our wake-up call.

Speaking about the stark, unequal impact of COVID-19 on vulnerable populations, Pope Francis recently said “This is the moment to see the poor.” The inadequacy of our safety nets for individuals and communities in need and the interconnectedness of global societal well-being have never been so apparent. Today, we need to harness the same moment to recognize the pervasiveness of violence against women and children—and to acknowledge that this is a problem that is everyone’s business. No longer can we tolerate patriarchal norms and governance systems that condone violence and relegate it to the private sphere as a “family matter.” No longer can we accept that so many women and children live in fear in their own homes, trapped in cycles of repression and abuse. The COVID-19 crisis has shone a spotlight on the ugly truth of violence against women and children. This is our wake-up call. We need a new vision for a world free from violence. We owe this to Carina, Tshegofatso and all those living in fear, long after COVID-19 is a thing of the past.

Amber Peterman is an associate research professor of public policy at the University of North Carolina at Chapel Hill.


Megan O’Donnell is assistant director for gender and a senior policy analyst at the Center for Global Development.


Karen Devries is a professor of social epidemiology at the London School of Hygiene and Tropical Medicine.


Alessandra Guedes is the manager for gender and development research at the UNICEF Office of Research-Innocenti.

Caring for Survivors of Gender-Based Violence in Afghanistan

Health workers can treat, speak up for, seek justice for, and empower survivors of gender-based violence