Go to homepage
The Color and Gender of COVID: Essential Workers, Not Disposable People
Gender 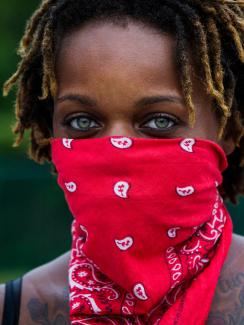 A woman looks into the camera during a demonstration to protest the shooting of Michael Brown and the resulting police response to protests in Ferguson, Missouri August 15, 2014. REUTERS/Lucas Jackson
by Catherine Powell June 4, 2020

What has become clear in this season of pandemic—and protest over police violence—is that the COVID-19 crisis is just the tip of the iceberg. The United States also suffers from a pandemic of failed leadership and a pandemic of poverty. More than 42 million unemployment claims have been filed since early March. As New York Times contributor, Roxanne Gay wrote recently, doctors may soon develop a coronavirus vaccine, Black people "will continue to wait for a cure for racism.”

From George Floyd to Eric Garner, Blacks have been killed by police in the course of law enforcement action for crimes of poverty. Many more live in conditions of economic insecurity. To take on this urgent poverty pandemic—inside the health pandemic—lawmakers must address the structural and racial inequalities embedded in both the health and financial crises, which are ultimately at the root of the protests we are witnessing on the streets in the United States and around the world.

Women of color sit at the intersection of race, gender, and economic disparities. Not surprisingly, these women are important leaders in both national organizations and grassroots movements, including Black Lives Matter (whose founders include three Black women). Therefore, they must be placed at the center of policy solutions.

Black people 'will continue to wait for a cure for racism.'

Fortunately, a crucial piece of legislation is currently being debated in Congress—one that would help millions of Americans in the midst of the COVID-19 pandemic and an economic crisis that is worse than anything the country has experienced since the Great Depression. The Health and Economic Recovery Omnibus Emergency Solutions (HEROES) Act, recently passed by the House and now under consideration in the Senate, would provide much needed funding to state and local governments, support for testing and contact tracing, and greater assistance for struggling workers and families.

But instead of supporting everyday people—including workers and consumers who are only provided limited, temporary assistance under the recent Families First and CARES Acts—President Donald J. Trump and his allies in Congress have been busy redistributing wealth on a massive scale, with initial bailouts favoring airlines and other corporations, along with proposals to advance immunity from lawsuits for companies.

Redistributing wealth on a massive scale, with initial bailouts favoring airlines and other corporations

Who are the people most affected by the Trump administration’s apparent priority of party politics over the public good? In my recent CNN opinion piece, Color of Covid: the racial justice paradox of our new stay-at-home economy, I coined the term “Color of Covid” to reveal how the COVID-19 pandemic lays bare underlying structural inequalities facing communities of color. The piece immediately spawned a hashtag, #colorofcovid, followed by a CNN series, “Color of Covid,” hosted by Van Jones and Don Lemon, highlighting a range of inequalities—from health disparities to the spread of the virus in prisons.

Now it is time to talk about what I call the “Gender of Covid” and how this intersects with the “Color of Covid.” The pandemic has had a significant impact on women, especially the participation of Black and Latinx women in the labor market. This convergence of race and gender disparities challenges our assumptions about the structure of work and reveals the paradoxes of our emerging stay-at-home economy: an economy in which women and people of color make up the majority of both essential workers and the unemployed.

The Color of COVID

As discussed in the CNN essay, our emerging stay-at-home economy reveals a two-tiered society: “non-essential” workers who can work from home, and “essential” workers—not only health care workers and other first responders but also blue-collar workers, such as grocery clerks, delivery workers, bus drivers, mail carriers, and warehouse workers.

In New York City, race and income are the strongest determinants of death rates from COVID-19

Within this new ecosystem, a “racial justice paradox” has emerged: Blacks and Latinxs are more likely to be unemployed due to the impacts of the pandemic on the labor market, but they are also overrepresented among essential workers who must stay in their jobs, particularly lower-skilled positions, where they are at greater risk of exposure to the virus. Further, in New York City, data by zip code reveals that race and income are the strongest determinants of death rates from COVID-19, even when controlling for age. Smartphone location data further suggests that residents of the richest neighborhoods fled the city—to vacation homes and elsewhere. Native Americans across the country have experienced similar effects: given crowded living conditions in part resulting from poverty, COVID-19 has had a disproportionate impact on their health. It has also profoundly affected their livelihoods, as the tribal businesses many depend on for income have come to a complete halt.

The Gender and Color of COVID-19

A similar duality has played out along gender lines. One in every three jobs held by women has been deemed essential, and women of color are more likely to have essential jobs. Often underpaid and undervalued, women dominate in frontline jobs ranging from “the cashier to the emergency room nurse to the drugstore pharmacist to the home health aide.” While part of an invisible workforce, women keep “the country running” and care for those most in need of assistance.

While the 2008 recession was referred to as a “mancession,” the current one is more like a “shecession.”

At the same time, while the 2008 recession was referred to as a “mancession,” the current one is more like a “shecession.” A majority of American jobs lost in April—in leisure, hospitality, education, and some parts of our health care industry—were held by women, with Black and Latinx women disproportionately affected. Consider the child care sector—virtually essential to gender equity in the workforce—which is mainly staffed by women, particularly women of color, but has been shuttered by the pandemic. Women also seem to be shouldering the burden of home-schooling. The disproportionate time women typically invest in child care is a primary reason for the gender pay gap and “mommy track” phenomenon. As Claire Cain Miller—who reports on gender and the future of work—noted recently, now that women are spending more time on child care chores because of the pandemic, "the repercussions could worsen."

Already, there are reports that male academics are finding a writer’s retreat in quarantine—with their academic paper submission up an estimated 50 percent—while female academics are not finding the same writer’s paradise, submitting fewer papers than normal. Women scholars of color face additional obstacles throughout their academic careers, including structural biases and being perceived as “incompetent,” as highlighted in the collection of essays Presumed Incompetent.

For single moms, who are disproportionately Black and Brown, balancing work and parenting responsibilities at home is even more challenging. Single parents often depend on extended networks—including grandparents—but are cut off from these circles of support during the pandemic. It took the story of a prominent single white woman, Congresswoman Katie Porter (D-CA), to garner attention to this problem. As the only single mother in Congress, Porter has eloquently spoken publicly about the challenges of juggling distance learning for three school-age children at home, while assisting with the national response to the pandemic in Congress.

An important body of research is emerging about how the pandemic reveals the multiple barriers that women of color face. Having coined the term “intersectionality,” Columbia law professor Kimberlé Crenshaw describes Blackness a “preexisting condition” and is hosting a series of webinars, Under the Black Light, to expose the impact of the health crisis at various intersections. Along similar lines, George Washington law professor Naomi Cahn chose Mother’s Day as an apt window to draw attention to the ways in which COVID-19 calls for a closer look at “the connections across gender, race, and class.”

What Can Be Done?

The race and gender justice paradoxes of our emerging stay-at-home economy scramble our assumptions about the future of work. Ideally, these paradoxes would challenge the low value associated with the work that women—especially women of color—do in caring for children, the elderly, the sick, and others in need. COVID-19 relief proposals that are currently under consideration would extend protections for workers and prison populations, housing and student debt assistance, and provision of paid sick leave.

In New York, people of color make up 75 percent of essential workers

Relatedly, the federal government must support state and local governments, who have shouldered the burden of responding to the deadly coronavirus despite the seemingly inept response of the Trump administration. While Republican lawmakers have resisted supporting them, state and local governments are major employers of first responders—including emergency health workers—and municipal employment has long offered stepping stones of opportunity to people of color and women.

Further, proposals for an essential worker's “bill of rights” should be backed. Senator Elizabeth Warren (D-MA) and Representative Ro Khanna (D-CA) have urged Congress to support higher pay, safety protections, sick leave, and job security for all employees—including gig workers and independent contractors. Beyond congressional hearings on protecting workers and consumers, similar proposals are under consideration in the New York City Council. (In New York alone, people of color make up 75 percent of essential workers).

It is time we stop treating essential workers and the unemployed as “disposable” people and start developing a politics of inclusion that better supports all of us—regardless of race, gender, and class. And Democratic politicians in the United States should be alert. Their party depends on the electoral support of Black and Latinx women. To have a chance at winning the upcoming election as the opposition party, they will need to ensure that the concerns of women of color are placed at the center of the ongoing response to this crisis.

What Other Sectors Can Show for Women's Leadership in COVID-19

by Rachel A. George

Lessons on inclusion from the fields of conflict resolution, security, and business