U.S. War Aims, Health, and the Armed Conflict in Ukraine

Ambitious U.S. objectives in the war will affect health on Ukrainian battlefields and in nations beyond 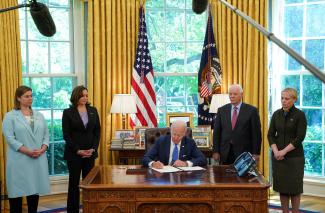 The resolute response of Ukraine, the United States, and NATO members to Russian aggression—combined with Moscow's military mistakes and political miscalculations—has changed the crisis from a desperate, rearguard action into an opportunity for the allied coalition to take the fight to Russia. This shift has generated questions about the coalition's objectives in the conflict. As Council on Foreign Relations President Richard Haass asked, "What does the West want in Ukraine?"

In late April, U.S. policymakers began identifying their ambitious war aims. Secretary of Defense Lloyd Austin captured the new strategy, stating that the United States wants "Russia weakened to the degree that it can't do the kinds of things it has done in invading Ukraine." This approach means defeating the Russian military in Ukraine and damaging Russia's ability to act as a great power. To achieve these goals, the United States has scaled up its military and intelligence assistance to Ukraine, increased economic and financial sanctions on Russia, embraced the potential expansion of NATO, intensified diplomatic efforts to isolate Russia, and engaged in high-profile signaling of American commitment.

This turn of events is momentous, especially after the dark days immediately after the Russian invasion. However, officials and commentators recognize that defeating Russia militarily and geopolitically will increase the violence and length of the war. As CNN White House reporter Stephen Collinson noted, the war is "transitioning into a long, bitter struggle, which will likely cost thousands more lives and tens of billions of dollars."

The adverse consequences of a prolonged armed conflict will grow in scope and duration in Ukraine, across Europe, and beyond. This trajectory will increasingly put health in the cross-hairs of the conflict, but it will not make health policy more important in determining what the United States and other countries want from the war.

Health in the Time of War

War is never good for health. The ambition in U.S. war aims will contribute to the avalanche of health dangers that armed conflict produces—deaths and injuries from military violence, destruction of health facilities and infrastructure, disruption of medical services, displacement of populations, damage to social determinants of health, and distortion of domestic and international flows of goods—such as foodstuffs—important to health.

However, health is never the reason why nations go to war or why they end wars. In Ukraine, U.S. war aims are not illegitimate because health will suffer more in the war zone and beyond during a prolonged conflict. The scope of the American objectives magnifies the importance of how the United States and other allied nations support Ukrainian military operations and mitigate the health damage and human suffering that the war causes on battlefields, across shattered cities, throughout refugee camps, and in societies well beyond the range of artillery barrages.

The Russian invasion of Ukraine violated international law and triggered the legal right of Ukraine and its allies to use force in individual and collective self-defense. Under just war theory, Russia's aggression created an ethical basis for Ukraine and the allied coalition to fight back. Legally and ethically, U.S. support for Ukraine's fight to defend its territory, independence, and democratic government is unimpeachable.

Having a just cause to wage war does not permit countries to fight without constraints. Ukraine and the states supplying it with military weapons and other assistance are subject to international humanitarian law (IHL) during armed conflict—as is Russia. As happens in all wars, questions, accusations, and fears have arisen concerning the legality of military actions by Ukrainian and Russian forces.

But just wars fought legally are still hellish affairs for combatants, civilians in conflict zones, and neighboring and distant populations harmed by flows of displaced people and the economic and social damage that war spawns and spreads. IHL permits the use of lethal and destructive weapons, potentially on a large scale, in achieving the legitimate purpose of an armed conflict—the partial or complete submission of the enemy. It allows attacks on military targets that incidentally kill or injure civilians and damage civilian property if the collateral civilian damage is not excessive in relation to the direct military advantage anticipated.

Further, IHL does not prohibit attacks on objects used by civilians and military forces—such as transportation infrastructure. It does not outlaw military operations that disrupt energy, agricultural, or medical supplies on which populations in other countries depend for economic activity, food security, and health services. It does not demand that an armed conflict end because the human toll increases the longer the war continues.

The alleviation of human suffering that armed conflicts—even just wars—produce requires humanitarian relief in conflict zones and development assistance for populations elsewhere that are adversely affected by the influx of refugees or by disrupted flows of goods important for health and well-being. However, demand for humanitarian relief and development assistance usually outstrips supply—a gap that grows the longer a war lasts.

If history is any guide, the U.S. objectives of defeating Russia militarily and geopolitically will make the war longer and more deadly, destructive, and disruptive. Such an outcome will stress humanitarian relief efforts in and around Ukraine and strain the willingness of those engaged in the fight to address harms that countries beyond the theater of conflict endure because of the war.

In addition, should the mission be accomplished, the United States would have the geopolitical incentive to prioritize rebuilding a war-shattered Ukraine and expanding NATO—strategic tasks that will be expensive diplomatically, militarily, and financially for many years.

The ambitious U.S. war aims will also further marginalize global health in international relations. The war in Ukraine has already downgraded COVID-19 and future pandemic preparedness as political and diplomatic priorities. A long, bloody, and destructive war will do nothing to elevate attention on the health trauma that COVID-19 has inflicted around the world or the many global health issues neglected before the pandemic.

In the face of escalation by the allied coalition, Russia has no motivation to retreat and accept a humiliating defeat, but has every incentive to fight harder and longer. Countries worried about the consequences of a U.S.-led geopolitical thrashing of Russia might increase their political and military support for Moscow. These potential outcomes also point to a war of attrition that grinds down health and its determinants between military and geopolitical millstones.

The direct, collateral, and indirect health harms caused by a prolonged war do not make the United States' war aims unjust. The Russian invasion is an existential threat to a sovereign, independent, and democratic Ukraine. Russian military violence has produced war crimes, atrocities, and accusations of genocide. As in conflicts past, the people now suffering the most—Ukrainians—are those most ferociously defiant despite the war's savaging of health. Russia's aggression and atrocities also endanger other sovereign, independent, and democratic nations in Europe, which want the Russian menace stopped sooner rather than later.

As U.S objectives suggest, the invasion and the war have created a geopolitical, ideological, and humanitarian inflection point in world history. In such conflicts, health policy plays no strategic role in setting war aims. At best, health considerations inform military tactics and the humanitarian management of the suffering that war inflicts.

The Road Always Traveled By

Health's lack of strategic importance concerning why the Ukraine war is being waged, what objectives countries have in this armed conflict, and how the war eventually ends is nothing new in the history of armed conflict. However, in the wake of a devastating pandemic made more dreadful by geopolitical competition and ideological conflict, the Ukraine war—and its likely prolongation—pour salt into wounds and make the desire for healing, recovery, and progress across global health a more distant hope.