Why the United States should strengthen its ties with Zambia 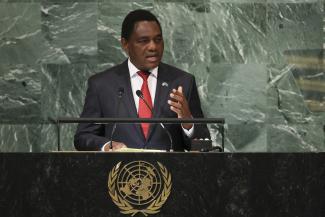 Public health and health security result not only from technical prowess, but also from economic and political choices, and good governance. As the Joe Biden administration convenes the U.S.-Africa Leaders Summit in Washington, DC, this week (December 13-15), Zambia's presence offers a clear opportunity to highlight strong African leadership and the potential for improved governance to strengthen international cooperation and improve health outcomes for millions.

Zambia is precisely the kind of partner the United States seeks to engage with in the region. The country has recently undergone a peaceful, democratic transfer of power with a new president, Hakainde Hichilema, who is determined to improve Zambian governance. His government has already secured greater macroeconomic stability and is focused on making gains in health, education, fighting corruption and boosting private sector investment.

The summit is an opportunity to highlight how strong relationships between countries in Africa, like Zambia, and the United States can strengthen good governance, health, and prosperity and improve U.S. ties with Africa as a whole.

Multiple analyses have established ties between democratic governance and improvements in health outcomes. In addition, improvements in governance may expand the beneficial effects of countries' own health investments. In one analysis, improved rule of law and "voice and accountability" were shown to increase the impact of public spending for health on under 5 mortality. The same analysis found that control of corruption—in addition to other measures of governance—magnifies the impact of public spending for health on life expectancy. Good governance has a health multiplier effect.

The reverse can also be true. Under Zambia's former president, Edgar Lungu (2015 - 2021), the country's economic environment lurched toward macroeconomic instability in the setting of governance challenges and increased public indebtedness. The World Bank World Governance Indicators from this era (see figure) suggest deterioration in control of corruption, and trends toward worsening rule of law, government effectiveness, and political stability, compared with other countries over the same time period.

As annual inflation grew to more than 20 percent and basic goods became increasingly difficult for Zambians to obtain (average monthly income is under $100 and has declined by 40 percent since 2014), the country experienced increasing prevalence of food insecurity, even prior to COVID (see figure). National debt skyrocketed, particularly Zambia's debt to China.

These economic shocks have not necessarily been associated with broader declines in health measures, although Zambia's next national demographic and health survey, delayed due to COVID, may shed further light. Also, in areas with strong external investment, such as programs to prevent and treat HIV, there appears to be continued progress. In this case, the steady increase in donor support to the health sector over recent years may have helped to stem some of the potential health effects of poorer governance.

However, there are important warning signs that threaten public health in the country that can hopefully be reversed. Mortality in children under the age of five—a statistic that reflects social, economic, and environmental conditions for children in Zambia, as well as food security and access to health services—plateaued during this last period of challenging governance, compared with countries across the eastern and southern regions of Africa (see figure). These health effects during a period of declining governance echo global multivariable analyses that have demonstrated indirect effects of corruption on health were responsible for an estimated 140,000 child deaths per year.

In addition, rates of an important risk factor for HIV—transactional sex—doubled, according to a study of Zambian adolescent girls and young women conducted from 2016 to 2017, and in 2018, despite an aggressive prevention program. Although modeled rates of HIV infection decreased during this time, increasing reliance on transactional sex as a means of economic survival, raises future HIV and other health risks, and worsens gender inequality.

A New Era for Zambia

Zambia shows signs of entering a new and more stable era. Macroeconomic and governance measures are trending positive. The Hichilema administration is not only open to partnership and investment, but seeking it. These highly favorable developments offer the opportunity to accelerate improvements in the health and health security of the nation.

Real challenges remain as Zambia's new administration seeks to convert favorable policy and economic gains—including a focus on expanding the health and education workforces—to sustained results. Zambia is ranked twenty-fourth from the bottom globally for mortality among children under age five, behind Haiti, and Zimbabwe. Zambians also face persistent obstacles to access to quality primary and higher-level health care for cancer, cardiovascular disease and other noncommunicable diseases. With a median age of just 16.7 years and 70 percent of the population under thirty years old, Zambia also urgently needs to generate economic opportunities for youth while expanding sexual and reproductive health services and HIV prevention.

The Biden administration's new National Security Strategy indicates that the United States prioritizes the link between health and development in Africa, stating that, "quality health-care systems are essential to economic growth" and it promises continued investments in health security and health systems in Africa.

Despite the deterioration of governance in Zambia over the past decade, the United States. remained a steadfast partner, investing in a $355 million Millennium Challenge Corporation Compact to provide clean drinking water to hundreds of thousands in Zambia's capital—a project which Zambia itself invested $50 million—and nearly $3 billion in PEPFAR funding to help fight HIV.

The Hichilema government's commitment to improved governance opens the way for even greater cooperation, including a potential new MCC compact.

Under 5 Mortality Rates in Zambia and East and Southern Africa

At the U.S-Africa Summit, President Biden will have the opportunity to highlight the link between health and economic development, and the necessity for improved governance in order to clear away obstacles for Africa's young population. United States-Zambia cooperation can serve as a great example of America's reliability as a partner, but also how African countries can unlock their own potential through improved governance that supports health and economic development. As noted in a December 8 White House briefing, "African contributions, partnerships, and leadership are essential to meeting this era's defining challenges."

The U.S. National Security Strategy also underlines increased competition between the United States and China, and the opportunity for cooperation on shared goals, including global health. China played a significant role in Zambia's debt crisis over the past decade. This week's summit offers President Biden a platform to challenge Beijing to reinforce the link between governance and health in Africa, with increased support for health systems as a cornerstone.

The Biden administration is wisely leaning into areas of shared values, priorities and aspirations with Zambia's Hichilema administration. This mutually beneficial partnership can model the benefits of improved governance to amplify the impact of investments to improve the lives of people in African countries.

Charles Holmes, MD, MPH, is director, Georgetown Center for Innovation in Global Health, professor of medicine, distinguished scholar, O’Neill Institute for National and Global Health Law, Georgetown University. He is former chief medical officer of the State Department's U.S. President's Plan for AIDS Relief and served as CEO, and is currently a board member of the largest health sector NGO in Zambia. He is a member of the Council on Foreign Relations and leads health systems innovation programs in multiple countries.


Ambassador (ret.) Mark C. Storella is director of the African Studies Center and professor of the Practice of Diplomacy at the Frederick S. Pardee School of Global Studies, Boston University. He was a United States foreign service officer for over three decades serving as ambassador to Zambia, deputy assistant secretary of state for Population, Refugees, and Migration, and dean of the Leadership and Management School of the Foreign Service Institute.

The Spiritual Dimension of COVID-19 in Africa

In Nigeria, the pandemic set up a political battlefield between Christian religious leaders and the state