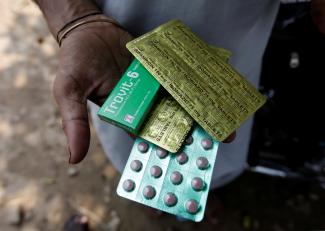 Tuberculosis (TB) is a devastating lung disease with roots that some scientists believe stretch back three million years. Even though drugs that eradicate TB have been around since 1944, 1.5 million people still died of the illness in 2020. An agreement announced earlier this month between two major drugmakers could improve access to TB medications for people in low- and middle-income countries (LMICs) where the burden is greatest, and it could change the global outlook of the disease. In turn, the United States—with its political, economic, and humanitarian might—could be a critical player in reducing deaths due to TB.

Macleods Pharmaceutical and Lupin Limited have agreed to slash the price of their TB prevention regimen—3HP, a three-month, oral drug treatment taken once-a-week—from $45 to $14.25 in 138 LMICs. This heavy discount, agreed upon as "part of a determined effort by partners to increase access to and improve supply security of short-course TB preventive treatments" (though competition from other big pharmaceutical makers may be a motivating factor, too), comes at a critical moment. More than a decade of global progress against TB has been reversed because of COVID-19. The Macleods and Lupin deal, however, should be a catalyst for greater investment in TB and new models of prevention and treatment. After the United States' paltry 6 percent funding increase in global TB control since COVID-19 emerged, it's an opportunity to step back up and address this preventable, curable condition.

1.5 million people died of tuberculosis in 2020

The price tag of TB prevention drugs has been a major barrier to access and adherence, especially since TB largely affects marginalized people within low-income countries. For example, in Kenya, people who are malnourished, have substance use disorders, and/or are incarcerated are at high risk for infection. TB treatment severely strained finances for as many as one in three patients in India, a 2018 study indicated. This new discount will not only prevent countless deaths, but also save thousands of dollars in treatment costs for every case averted.

TB is the world's leading infectious disease killer after COVID-19—three people lose their lives to it every minute. Its symptoms include violent coughing and dramatic weight loss, and it kills by damaging the tissues in the lungs. In up to one-third of cases, it migrates to the spine, eyes, and internal organs. Alongside AIDS and malaria, TB is considered one of the 'big three' infectious diseases—"humanity’s deadliest foes"—consistently targeted for elimination in U.S. law and congressional resolutions.

Global investments in TB are not only "completely inadequate" to end the global pandemic, but also "pitiful in comparison" to those of AIDS and malaria, assert experts and advocates from Central Asia and South Africa. Over the past 15 years, the United States has dedicated an average of only 3.78 percent of its "big three" foreign aid budgets to TB interventions. Congress also appropriates more than seven times as much funding to the U.S. Centers for Disease Control and Prevention (CDC) for AIDS research than it does for TB, stifling much-needed progress.

"Competition for funding is very strong," the World Health Organization (WHO)'s Regional Eastern European and Central Asian TB team noted in a 2017 report. But TB seems to be losing. From the petri dish to the boardroom, TB is often falsely perceived as unpopular, unstable, and unworthy of attention—in part because its ties to poverty may make TB investments seem more like foreign aid rather than contributions to global health security, and private sector research is not profitable. Further, for diseases of poverty like TB, successful programs target entire health and social systems, making it difficult to measure impact and cost-effectiveness for donors.

But the reality is that TB leads to 1.8 and 1.4 times more deaths each year than malaria and AIDS, respectively. When addressed, it has significant social and economic returns; according to the Copenhagen Consensus Center, each dollar invested in TB prevention and control could save as much as $43 from lost wages and health-care costs compared to $28 for HIV/AIDS and $36 for malaria. A 2021 Lancet commentary said that figure could be as high as $49. Advancing the fight against TB would not only mitigate a leading cause of death among people with AIDS, but also strengthen health systems to support everyone seeking care.

TB investments can be leveraged, as well, through strategic health diplomacy (SHD), whereby investments in targeted global health interventions can both save lives and advance national interests by opening up opportunities for transnational dialogue and geopolitical engagement. Former Senate Majority Leaders Tom Daschle (D-SD) and Bill Frist (R-TN) have argued that SHD has the potential to be "our most effective form of foreign assistance," and "advanc[ing] global health security and diplomacy" is an explicit goal of the Biden Administration in responding to COVID-19. Indeed, the U.S. Departments of State and Health and Human Services both have offices dedicated to health diplomacy.

One of the most successful American SHD initiatives has been the President's Emergency Plan for AIDS Relief (PEPFAR), which has averted 21 million deaths in over 50 countries since its founding in 2003. The Bipartisan Policy Center (BPC) has twice concluded that the program has also had major "positive secondary effects in four key areas: socioeconomic development; public opinion; governance, stability, and civil society empowerment; and diplomatic engagement." Fifteen U.S. Ambassadors told the BPC that difficult discussions of human rights, terrorism, and military capacity were made possible by PEFPAR's softening of foreign relations.

As with AIDS, supporting TB efforts in countries with high disease burden could be an excellent avenue for strategic health diplomacy. According to former CDC Director Julie Gerberding, PEPFAR's success is based on clear goals, quantifiable impact, and fiscal commitment—each of which the United States already demonstrates through its international contributions to the Global Fund to Fight AIDS, Tuberculosis and Malaria, and domestic funding of the United States Agency for International Development (USAID)'s Global TB Program. Its official Global Health Security Agenda also warns of drug resistance, which is an especially drastic threat in the TB crisis. PEPFAR leadership acknowledges that integrating TB services into their AIDS programs is a productive and cost-effective priority, making it a convenient candidate to advance American SHD.

In addition, these investments could build bridges with new countries. Nineteen of the world's 30 highest-burden countries for TB, HIV-associated TB, and multidrug-resistant TB are not currently supported by PEPFAR. These include four nuclear powers and four countries among the bottom 30 percent of U.S. trade partners by value. Positive relationships with these states would contribute to global security and stimulate more trade; supporting their TB prevention and treatment programs is a strategic and impactful way to engage with them.

Countries Supported by PEPFAR and/or With the Highest Tuberculosis Burden

Sustainable impact against TB is only possible if the implementation of this strategy is founded on two pillars: social medicine and community-led interventions. In addition to catastrophic costs, people drop out of TB treatments because of malnutrition, substance abuse, and shame, among other consequences of structural violence. Simply sending pills to underserved and understaffed clinics will reach a fraction of the people who need them. In response, consulting with and training community health workers leads to "improved patient treatment outcomes, increased case notification, and decreased treatment loss to follow-up." Community-led peer support programs can also help counter TB stigma and provide emotional support and information. Untapped networks and resources, unspoken taboos, and unrealistic goals are hard to identify without the input of people living with TB and sociomedical experts from affected countries.

Another important means of implementing SHD facilitated by this month's pharmaceutical deal would be more equitable interventions. As former U.S. Ambassador to Zambia Mark Storella attests, "the sheer size of our health programs present[s] opportunities to change the way people think." The current "cornerstone" model for tuberculosis control in developing countries—Directly Observed Therapy Short Course and Directly Observed Preventive Therapy (DOT)—requires that health-care workers personally watch people with TB swallow their pills. This practice has been characterized as "quintessentially colonial" and makes treatment hard to complete because people need time and resources to regularly visit clinics. An empowering alternative is equipping and empowering people at risk of TB to self-administer their pills. This approach is 30 to 40 percent less expensive than DOT prevention, and is preferred by people living with TB and care providers, and it is endorsed by the CDC and other U.S. health authorities.

The United States has the potential to protect millions of the world’s most vulnerable people and usher in a progressive new era of TB control while reaping the benefits of SHD at an unprecedentedly low price. How much more incentive does a great power like the United States need to finally end this age-old affliction?

Why the Global Fund Is Important to U.S. Foreign Policy