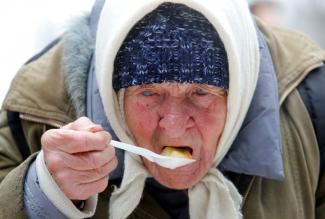 An elderly woman eats a meal during a charity event that provided food to lower-income citizens in a cathedral compound in Stavropol, Russia, on December 13, 2019. REUTERS/Eduard Korniyenko
by Lillian Posner May 4, 2022

Global food markets are in turmoil as Russia wages war on Ukraine, one of the world's most important breadbaskets. Before the invasion, Russia and Ukraine together accounted for more than a quarter of the world’s grain exports, with Russia weighing in at 18 percent and Ukraine at 7 percent. Now, much of that trade has been upended by the conflict. In a popular Russian social media platform called Telegram, Russia's former president, Dimitry Medvedev wrote, "The food security of many countries depends on our supplies. It turns out that our food supply is our secret weapon. 😉 Quiet, but threatening."

Medvedev, a staunch ally of Russian President Vladimir Putin, gives the impression of a grain-rich country that can turn off the spigot at whim to feed its friends and not its adversaries. But for many ordinary Russians, the picture is not so rosy. Images of frenzied shoppers grabbing packages of sugar from grocery store shelves have peppered Russian media as fears of inflation drove people to stockpile necessities before prices skyrocketed. Those fears have now materialized as Russia grapples with 17 percent inflation and food prices that have ballooned as much as 210 percent.

85 percent of Russians stockpiled food in 2022

The Kremlin has issued several warnings against panic buying and tried to reassure people that despite sanctions, there's still enough food in Russia to go around. But a survey conducted by the state-owned Russian Public Opinion Research Center reported that 85 percent of Russians stockpiled food in 2022. Stepan Lvov, the organization's director of strategic development, attributed this crisis-adaptation strategy to the memory of the "lean nineties" following the dissolution of the Soviet Union, when prices and inflation soared, and grocery store shelves were frequently bare.

Russia's food worries were brewing well before its dramatic escalation of the war with Ukraine on February 24. Just a few weeks earlier, Russian artist Yevgenia Skovart drew attention to the untenable costs of food, particularly for the elderly, with a portrait of Russian Prime Minister Mikhail Mishustin. The portrait—made of cabbage leaves, rice, and other staple foods, with a ruble value equivalent to the average increase in cost of living in Russia (1,028 rubles or $13.40)—made a splash on Instagram and highlighted the strain on the food insecure in Russia before being disassembled and eaten.

Russian Business Financial consulting agency calculated that in 2020, 24.6 percent of the Russian population, or 36 million people, were living on the edge of poverty. Increases like the one that inspired Skovart's portrait and the spike following the invasion could very easily push vulnerable people into severe poverty.

In fact, Russians' access to quality and affordable food has been on the decline since Russia's initial invasion of Ukraine in 2014. Russia responded to Western sanctions, levied due to its annexation of Crimea, with countersanctions on food imports from the European Union, which at the time accounted for more than 50 percent of Russia's imported food supply. The Russian government presented this decision as a matter of patriotism and a boon for domestic agriculture.

But for many, the highly-publicized videos of wheels of cheese churned beneath the treads of bulldozers, slabs of bacon incinerated, and truckloads of shiny Polish apples dumped directly into landfills left a deep impression, especially in a country where food shortages and major inflation are features of recent memory. By 2018, Russian customs authorities announced they had destroyed 26,000 metric tons of food.

By banning EU food imports, Russia hoped to bolster its domestic agricultural production, and in some sectors, it was successful. In 2016 Russia became the world's biggest exporter of grain and in 2020 Russia became a net exporter of agricultural products for the first time since the dissolution of the Soviet Union. Into the vacuum created by bans on Italian parmesan came a burst of Russian agricultural ventures and businesses like that of Oleg Sirota, a cheesemaker from outside Moscow with big dreams of grocery store shelves piled high with Russian-made cheese. But these developments haven't necessarily translated into better food for Russians.

Along with Sirota's wheels of mountain Swiss stamped with the surname of Vladimir Putin, came palm oil. The sudden disappearance of high-quality competition created ample space for unscrupulous companies to flood the market with dubious substitutes. To make matters worse, Russia's consumer protection agency had been almost completely defanged in 2010, when then-president Medvedev decided that Russia's food regulations were too stringent for businesses. Under Medvedev's revised policy, food producers were inspected only once every three years and never without advanced warning, making consumers dependent on an honor system to know about food quality.

That businesses took advantage of lax regulation to cut costs should come as no surprise. In 2018, up to a quarter of Russian cheese was designated as fake due to the use of palm oil instead of dairy. Roscontrol, an independent consumer watchdog in Russia that conducts laboratory tests of consumer products and rates them according to their safety, found that around 60 percent of products failed to meet standards. Of the products tested by Roscontrol, 44 percent of sausages, 46 percent of white bread, 57 percent of red caviar, and 59 percent of butter brands were deemed to be contaminated with pathogens like e. coli, contain unsafe additives, or be deceptively labeled according to Roscontrol's catalog as of April 2022.

Instead of bolstering Russian agriculture, import substitution has saddled Russians with higher costs and fewer nutrients. A study conducted in 2019 found that Russian countersanctions cost Russia 70 dollars a person per year. As prices rise, Russians are increasingly turning to cheaper and lower-quality products such as cheese made from palm oil. These days, Roscontrol's website features articles advising readers how to tighten their belts as products disappear from shelves and make their rubles stretch further due to the "crisis of 2022" (Russian law forbids the use of the word war in relation to Ukraine).

So far, Russia hasn't made good on Medvedev's threat to shut off the tap in terms of its own exports, although a temporary suspension of certain food exports to Russia's economic partners in the Caucasus and Central Asia has caused panic buying and price increases to ripple through the region. Russia's blockade of Ukraine's Black Sea ports has dramatically curtailed grain shipments and threatens to exacerbate food insecurity worldwide. Even more grim are accusations by the Ukrainian government that Russian forces are stealing grain from the Ukrainian territories they occupy in a move that echoes the mass starvation of the Holodomor genocide perpetrated by the Soviet Union in the 1930s.

Medvedev ends his post by saying that Russia will eat breakfast alone, share lunch with its friends, and deprive its enemies of dinner. But as Russia's economy contracts from its war and Russians go without, the Kremlin would be wise to remember that hunger is not a discriminate weapon.