Go to homepage
Rethinking the Future of Global Health
Poverty

Rethinking the Future of Global Health

There can be no better time to reimagine our health security based on global cooperation, equity, trust, and solidarity 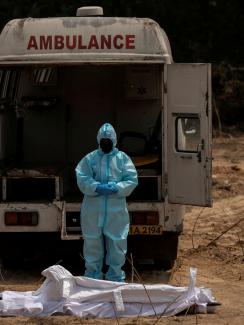 A man offers funeral prayers for a Central Reserve Police Force (CRPF) officer who died from the coronavirus disease (COVID-19), at a graveyard in New Delhi, India, April 29, 2020. REUTERS/Danish Siddiqui
by Vaibhav Gupta May 5, 2020

Imagine this for a moment. There is a safe and effective treatment and a vaccine for COVID-19. Cases are waning, and many places are already disease-free. The last few countries to continue with lockdowns are easing their restrictions. People are beginning to slowly rebuild their lives. The world is bruised badly, but it has survived.

What will this new world look like? It is difficult to answer this question with certainty. What we do know for sure is that there will be very few in the world whose lives will not have been upended by this crisis. Yuval Noah Harari, an Israeli historian and philosopher, has called COVID-19 “perhaps the biggest crisis of our generation.”

Perhaps the biggest crisis of our generation

Maybe what will it look like is not the right question to ask. Maybe we should be asking, what do we want this new world to look like? I suspect one thing we are all hoping for is a growing multilateral and evidence-based approach to global health and an increase in its urgency—if not its funding. There is already talk about this in the global health community. Sadly, these discussions have focused on the very narrow subject of the reform of the World Health Organization (WHO). Some political leaders have turned the WHO into a scapegoat to hide their own failures on the COVID-19 crisis at home. The WHO is not without its shortcomings. However, the obsession with WHO reform misses the point. The debate over the future of the WHO is distracting us from digging deeper into what really needs to be done.

So, what sort of changes should we be talking about? Global health has always been political, and COVID-19 has exposed the deep divisions that affect it. Blaming a country and its culture for causing COVID-19 will only hurt global health cooperation.

“The vaccines that were developed ended up mostly in wealthy countries, while the rest of the world went without them.”

Even as scientists and researchers race against time to find a vaccine to stop the spread of COVID-19, what we should be worrying about is how to get the vaccine to everyone who needs it. Seth Berkley, chief executive of Gavi, the Vaccine Alliance, warns us about a repeat of the 2009 H1N1 pandemic, when “the vaccines that were developed ended up mostly in wealthy countries, while the rest of the world went without them.” What we need now is a firm resolve, strategic planning, and decisive action to rectify the anti-otherness and inequity in global health.

WHO defines global public health security as “the activities required to minimize the danger and impact of acute public health events that endanger the collective health of populations living across geographical regions and international boundaries.”

—WHO Definition of Global Health Security

The reality is that many people in the world care more about diseases that kill people in rich countries. Global health for some has become synonymous with the health security of a few. While pandemics and emerging infectious diseases receive plenty of funding and media attention, neglected tropical diseases, which impact millions, struggle to get visibility and research funding. Madhukar Pai, the Canada research chair in translational epidemiology & global health at McGill University in Montreal, said that this is maybe because neglected tropical diseases “do not reach the shores of the richest countries.”

There can be no better time to reimagine global public health security. Fear is leading to calls for de-globalizing the world. Countries are turning inwards. They want to restrict travel and trade. Having failed spectacularly in responding to COVID-19, governments in the developed world are under increasing pressure from taxpayers to demonstrate accountability. It will not be surprising, then, if funding for diseases that mostly impact the most vulnerable and marginalized in developing countries declines even further. That will be catastrophic.

Cooperation is essential to global public health security. So are equity, trust, and solidarity. An approach to global public health security that prioritizes high-income countries and the diseases that impact their populations the most is unjust—not to mention such an approach will likely be ineffective and will fail to secure the cooperation of low- and middle-income countries. One might argue that the concept of global health security is very clear on tackling acute public health events. In reality, people in developing countries cannot afford to care about that distinction. Disease and death are an ever-present reality for many.

Ebola swept West Africa between 2014 and 2016. Aid flooded in to contain the disease, especially after a few Ebola cases were found in the United States and Europe. However, the aid effort received a lot of flak. Community leaders in Democratic Republic of Congo questioned why help was only being extended for Ebola when diarrhoeal diseases and malaria were killing people in large numbers every day. External aid and technical assistance were entirely focused on Ebola and neglected the health system. Health workers were able to earn much more if they worked on the Ebola response instead of at their local health centers. This has been typical of responses to infectious disease outbreaks and epidemics originating in developing countries.

The point is, it is not enough

Taxpayers in donor countries might argue that there is nothing wrong if their tax dollars are selectively used to keep dangerous infectious diseases out of their backyard rather than strengthening health systems in Africa and Asia-Pacific. The problem with such an approach is that it undermines efforts to build trust and solidarity that is needed to beat a disease like COVID-19. It also results in an excessive focus on short-term technical interventions, to the detriment of longer-term interventions such as building domestic capacity and resilience, health promotion activities, and community engagement, which are crucial against diseases such as COVID-19. Of course, bilateral aid agencies and multilaterals do support health system strengthening on top of emergency aid for pandemics. The point is, it is not enough.

COVID-19 cases are rising in Africa and leaders in the region are concerned. Abiy Ahmed, Ethiopia’s Prime Minister and a Nobel Peace Prize winner, is worried that “access to basic health services remains the exception rather than the norm” in his country.

We have seen how COVID-19 has overwhelmed even strong health systems. It could cause absolute havoc in countries with weaker health systems in Africa, which will struggle to deal with the simultaneous onslaught of COVID-19 and other diseases such as diarrhoea, malaria, HIV, and TB, which remain considerable threats. We see this happening in Zimbabwe already. The country is facing a malaria outbreak and experts fear that the health system might crash in case of a widespread COVID-19 outbreak. A recent analysis by the WHO has shown that COVID-19 related disruptions could lead to a doubling in the number of malaria deaths in sub-Saharan Africa this year compared to 2018. Years of progress on diseases such as malaria will be wiped out if health systems in developing countries cannot cope with COVID-19.

While it is hard to overhaul systems in the middle of a crisis, it is evident that health systems strengthening in developing countries has to be a top priority for the global health community in the future. We would be setting ourselves up for failure against a future pandemic if we fail to do so.  In a pandemic, we are only as strong as our weakest link. Unfortunately, you cannot fix that weakness overnight.

The Fork in the Road

Will multilateralism and solidarity win against protectionism? Will global health change for the better and become more inclusive? This outcome may appear unlikely at this moment when global health seems like a zero-sum game and trust is running low. The WHO’s position has been severely undermined. The acrimonious exchanges between the United States and China on the origins of the SARS-CoV-2 virus, which causes COVID-19, also do not bode well. Most countries have placed some limitations on exports of essential commodities including masks and protective equipment. While sovereign nations reserve the right to protect their own populations, will global health collaboration emerge unscathed from COVID-19?

Even as nationalism and nation states gain ground, I believe that international cooperation and multilateralism will not just fade away. Indeed, these forces may become stronger. The recent G20 leaders’ statement on COVID-19 gives us a glimmer of hope. It called upon all countries to share resources and information to combat COVID-19 and was unequivocal in its support for WHO and its mandate. It further committed to supporting the most vulnerable people and strengthening health systems everywhere, underlining equity as an important principle in the response to COVID-19. Even developing countries like India, which are facing their own coronavirus crisis, are rising to the occasion. India, which played an important role in the creation of a South Asian Association for Regional Cooperation emergency fund to fight COVID-19, has supplied various medical supplies and testing equipment to its neighbours in the South Asia region.

Every country will have its own choices to make in the coming days. Deft diplomacy will be needed to put global health back on track.

Speaking of diplomacy, an exchange between two iconic characters from the TV series Yes Minister comes to mind. This takes place as the technocrat Sir Humphrey Appleby is explaining Britain’s relationship with the European Union to Government Minister Jim Hacker.

Sir Humphrey Appleby: “It is just like the United Nations in fact. The more members it has, the more arguments it can stir up. The more futile and impotent it becomes.”

One can only hope that the very size and diversity of institutions, such as the United Nations and its agencies, including the WHO, will ultimately result in the triumph of multilateralism and solidarity in the coming months and years. For that to happen, countries must adopt a different approach to health diplomacy than that professed by Sir Humphrey.

Vaibhav Gupta is a global health and international development expert with fifteen years of experience.