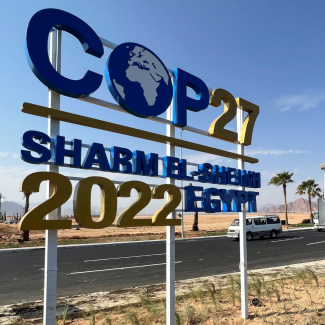 In a few days, the world's governments will once again gather, this time in Egypt, to negotiate the future of our planet and its people at the twenty-seventh Conference of the Parties (COP27). Tense discussions are expected at the upcoming UN climate change conference, particularly on issues related to climate financing, whether for adaptation to the anticipated impacts of climate change, or for the loss and damage that has already occurred and is irreversible.

Mental and emotional health are very much influenced by our surrounding environment, including the changing climate

Without a doubt, the health of humans will be gravely affected by the climate crisis—and already is in many parts of the world. Last year’s climate conference, COP26 in Glasgow, put health front and center, largely due to the heightened health consciousness that resulted from the COVID-19 pandemic. There was a health pavilion led by the World Health Organization with two weeks of health-focused events. More than 50 countries made a commitment to build climate-resilient and low-carbon national health systems in the coming years.

Discussions around climate and health tend to focus on how climate change affects physical health—injuries and deaths resulting from typhoons, undernutrition from food insecurity, increasing emergency room visits due to exposure to extreme heat, among others. What is often forgotten is that climate change affects our brains and hearts too. Our mental and emotional health are very much influenced by our surrounding environment, including the changing climate.

As climate and health scholar-advocates from the Philippines—one of the world’s most climate-vulnerable countries—we are too familiar with how extreme weather events, such as typhoons and flooding, take lives, destroy property, and displace communities. These disasters then generate emotional distress, especially among the vulnerable in society, including children, women, elderly people, low-income families, and people with disabilities. Such post-traumatic stress can last for a few days, or worse, for a lifetime.

Apart from the emotional distress brought about by abrupt catastrophic events, the climate crisis is also generating other types of psychological reactions across the population—related to ongoing climate issues. For instance, mental and emotional distress is now being experienced by families living in coastal communities, whose houses are slowly inundated by the rising sea level, as well as by farmers who are beginning to face more dry spells, fearing loss of harvest and their ability to put food on their family’s table.

Meanwhile, young people who see climate-related extreme events on social media happening in other places, or who learn about the slowness of climate action among national and global leaders, experience different forms of "climate anxiety," feeling deeply worried and angry about their portentous future. The young activists who threw soup at Van Gogh’s "Sunflowers" painting in London may be an example of this climate anxiety—or anger. Recent evidence shows that young people around the world, regardless of their geographic setting, are already experiencing climate anxiety. In another study, the young people of our country, the Philippines, were found to be the most climate anxious youth in the world.

How do we enhance the psychological resilience of individuals and communities as they confront the evolving climate crisis? As countries come to COP27, they need to honor their earlier adaptation funding commitments and even pledge to dramatically increase them, as the need for adaptation, especially in developing countries, continues to increase. Moreover, the share of health in adaptation financing needs to be significantly expanded. More specifically, investing in functional and equitable mental health-care systems need to be explicitly included in health adaptation funding. Health sector adaptation should go beyond addressing climate-sensitive physical health conditions like vector-borne diseases and heat-related noncommunicable disease. In order to make this happen, mental health care needs to be included in funding for adaptation, but it also needs to be included in the costs related to loss and damage experienced by countries in the global south.

In addition, future nationally-determined contributions and national climate and health plans should explicitly include mental health as a priority area. There must also be increased investments in climate change and mental health research as well as in robust mental health information systems, especially in climate-vulnerable, developing countries. Such monitoring systems will allow countries to keep track of the long-term effects of climate change on mental health, which will aid in the design of timely, effective, and culturally-appropriate interventions.

Climate education that instills hope and optimism needs to be made available to all people, especially to youth. It enhances psychological resilience and helps convert anxiety and anger into agency and action. Education and empowerment can be conducted at both the individual and community levels. Strong social support inspires individuals to act and live. New initiatives such as COP2 (Care of People x Planet) and Climate Cares, which are raising the profile of the climate change and mental health nexus, need support and promotion as well.

Protecting our properties, livelihood, and physical health against climate change are undoubtedly important. But strengthening the human spirit through actions that promote mental and emotional well-being may be even more vital as people begin to face the difficult challenges presented by our already-warming planet.


John Jamir Benzon R. Aruta is a senior lecturer in psychology at Sunway University, Malaysia. He is an active counseling practitioner and environmental psychologist working on the impact of climate change on youth’s mental health.