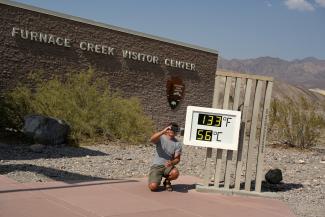 With climate change, temperatures will continue to soar and break records and there will be an impact on human environments and health. Even a small rise in average temperatures due to climate change can mean a big increase in heat extremes. Human activities have already caused global temperatures to rise an average 1.2 degrees Celsius (2 degrees Fahrenheit) since pre-industrial times. The media and public have all too often ignored the connection between heat extremes and climate change. But for more than three decades, climate scientists have predicted that climate change would make heat waves—a series of unusually hot days—more frequent, intense, and longer-lasting.

Since the 1960s, heat waves in major U.S. cities have stretched from three to four days on average and have increased in frequency from an average of two heat waves per year to six. If emissions continue unabated, temperatures during heat waves could rise by a projected 3 to 5 degrees Fahrenheit. Even under a low-emissions scenario, they could climb by 1 to 3 degrees Fahrenheit.

Heat can have a profound impact on health. In the United States, it is the leading cause of death related to weather events, resulting in more lives lost than tornadoes or hurricanes. Increased temperatures can lead to serious illness, particularly if communities and people are not prepared for it. When temperatures remain high at night, human bodies face increased strain because the heart pumps harder to moderate body temperature. Higher humidity also poses a challenge. The human body cools by sweating and if humidity becomes too high, the body reaches the "wet bulb" temperature where perspiration no longer provides a cooling effect because the already saturated air cannot hold any more water. If humidity is 100 percent, the wet-bulb threshold can be reached at a temperature of 95 degrees Fahrenheit. Over the past forty years, reports of wet-bulb temperature events have rapidly increased, and in some areas in the subtropics, these incidents have approached the limits of human survivability according to research. Those changes have put millions of people living on the southern Persian Gulf shoreline and in northern South Asia on the edge of what human physiology has evolved to tolerate.

Higher temperatures pose particular challenges for residents of cities. Because urban building materials like concrete tend to trap heat, shade can be hard to find, and buildings block cooling breezes. As a result, urban residents encounter the urban "heat island effect," suffering greater extremes of heat than people in the countryside. Heat also kills unevenly, with older people particularly at risk. In 2018, China reported 62,000 heat-related deaths in people over the age of 65, while India reported over 30,000 deaths.

Heat waves can turn deadly quickly. If air-conditioning or cooling waters are not readily available, the body can quickly overheat and trigger fatal heat stroke. But air-conditioning is not yet widely available. Of the 35 percent of the world's population that live in countries with an average daily temperature above 25 degrees celsius (77 degrees Fahrenheit), only 10 percent own an air-conditioning unit. As climate change has brought more heat, demand for air-conditioning has grown, which has caused carbon dioxide emissions to grow, according to the International Energy Agency (IEA). The IEA estimates that by 2030 the number of air-conditioning units installed could increase by two-thirds.

Even where air-conditioning is available, power companies may struggle to meet the increased demand for electricity because extreme heat negatively impacts power generation and transmission. Current infrastructure was not designed to withstand the intensity of the heat events occurring now. When higher temperatures warm the waters required to cool power generating plants, for example, electricity plants shut down. Higher temperatures also reduce the amount of electricity that transmission lines can carry. During the recent heat wave in Washington state, the local utility resorted to rolling blackouts when electricity demand exceeded supply. And the U.S. Energy Information Administration has warned that much of North America may suffer electricity shortfalls this summer due to higher temperatures.

Climate-related heat issues demand greater heat preparedness. A review of data from 43 countries spread across all inhabited continents revealed that climate change had caused over one-third of all heat-related deaths. Scientists expect that percentage to grow in the future, but planning for heat waves can save lives. Consider France: in 2003, France experienced a particularly deadly heat wave, leading to an estimated 15,000 deaths. By 2004, the country had adopted a national heat action plan, which it updates annually. France now ranks among the best heat-prepared nations in the world. The country regularly communicates the dangers of heat and how to cope with it through a slew of podcasts, radio and TV ads, and social media. It has also developed a national color-coded heat wave warning system. Since the most vulnerable in society are at highest risk of heat-related illnesses, each town hall maintains a list of senior citizens so the municipalities can contact them during extreme heat events. Senior citizens' homes must maintain a "cool room" for residents to escape the soaring temperatures. Health-care workers receive training on how to deal with heat-related illnesses. French playgrounds have abandoned tarmac for less heat-absorbing materials. The myriad of efforts undertaken have helped France cut its death toll during extreme events by 90 percent since 2003.

Similarly, after the city of Ahmedabad in India became the first city in South Asia to develop a comprehensive plan to address extreme heat, heat-related mortalities on the hottest days dropped by 27 percent according to the Indian Institute for Public Health. India has now embarked on its own effort to widen planning for heat extremes, with over twenty states and one hundred municipalities in India now embracing heat action plans.

But in many places of the world, little planning has occurred to address heat extremes. For example, African cities are expected to see high levels of population growth and at least a twenty-fold increase in dangerous  heat by the 2090s. With higher poverty levels, poor housing quality, and the demand for outside labor, urban residents in these countries face acute heat risk. Yet, in sub-Saharan Africa, virtually no early warning systems or heat action plans are currently in place.

Extreme heat worsened by climate change has already made itself known. It's now up to policymakers to take the steps necessary to reduce the threat from climate-driven heat extremes. That means urgently reducing harmful greenhouse gas emissions to avoid unmanageable heat and adopting heat safety policies and systems that help manage the heat that is now unavoidable.