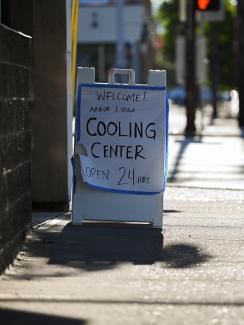 A sign sits outside of a cooling shelter during a heat wave in Portland, Oregon, on August 11, 2021. REUTERS/Mathieu Lewis-Rolland
by Alice C. Hill and Madeline Babin October 12, 2021

Heat kills. In fact, it kills more people than any other natural disaster in the United States. And climate change is making heat deadlier. With the global average temperature projected to rise at least 1.5 degrees Celsius (2.7 degrees Fahrenheit) above pre-industrial levels by 2050, record-breaking temperatures will become more frequent and severe. Countries across the globe need to take action to address the human and public health effects of extreme heat made worse by climate change. Under President Joe Biden, the U.S. government is taking steps to address the impacts of climate-worsened heat. However, the United States and other countries must mount more ambitious efforts to protect people and property from deadly heat.

"Hot and Humid" Takes on a Different Meaning

Countries around the world are already feeling the lethal effects produced when climate change increases the severity of heat. Deaths attributed to extreme heat increased by over 74 percent between 1990 and 2016. Heat waves inflict more fatalities in the United States than hurricanes, lightning, tornadoes, floods, and earthquakes combined. The summer of 2021 shattered records to become the hottest in U.S. history. Triple-digit temperatures resulted in 600 excess deaths across the Pacific Northwest in a scorching heat wave made 150 times more likely by climate change. In countries throughout Asia, Europe, and Africa, heat spells have constituted some of the deadliest disasters in recent years. In 2019 alone, extreme heat killed 356,000 people in just nine countries. Nearly one-third of the global population currently lives in areas subject to deadly heat for at least twenty days annually. If greenhouse gas pollution continues unabated, almost three-quarters of humanity "will face the threat of dying from heat by 2100."

Heat waves during periods of high humidity are particularly dangerous. Over the past forty years, high-humidity heat waves have been increasing in frequency and duration. This trend heightens the risk to human health when temperatures approach or surpass the limit for human survival, a threshold found using the “wet-bulb temperature.” This temperature measures heat and humidity to determine how effectively a person’s body can regulate its core temperature through sweating, the primary way humans lower body temperature.

Once the wet-bulb temperature reaches a level that prevents sweat from vaporizing off the skin, people cannot lower their internal temperatures to a tolerable range. Instead, the sweat accumulates, and the body temperature continues to climb, ultimately leading to death for even healthy individuals after just a few hours of heat exposure. A recent study calculated that heat exposure in "person-days"—the number of days per year that exceed the wet-bulb temperature multiplied by the total urban population exposed—had almost tripled from 40 billion person-days in 1983 to 119 billion person-days in 2016. Communities in Pakistan, Australia, India, and the United States have already experienced conditions at or near the wet-bulb ceiling

Without relief, heat stress can produce heat exhaustion or heat stroke, in which a person's core body temperature surges above 104 degrees Fahrenheit (40 degrees Celsius), causing brain and organ damage. Sweltering temperatures impact performance by impairing coordination and stamina, which can lead to workplace injuries. Heat poses the greatest risk to low-income communities and nations that often have more workers outdoors, such as farmworkers and construction workers, as well as fewer resources to provide air-conditioning, running water, and cooling centers. As with other health threats, children, older people, and those living with chronic health conditions are at highest risk.

These adverse effects on physical and mental health can exacerbate socioeconomic and racial inequalities because the consequences of climate change disproportionately burden low-income and non-white communities. When extreme heat strikes, these communities often have the least access to coping tools, like air-conditioning. As a result, rising temperatures could be expanding the racial achievement gap in the United States and other countries. One study analyzing fifty-eight countries determined that, for every additional day at or above 80 degrees Fahrenheit (26.7 degrees Celsius), students, particularly Hispanic and Black students in the United States, performed worse on standardized tests. A recent analysis of K-12 schools in the United States serving over fifty million children concluded that, by 2025, more than 13,700 schools would have to install air conditioning, while another 13,500 need to upgrade current systems.

Countries should reduce greenhouse gas emissions to avoid the worst warming and the deadly heat waves that would follow. But, even if countries curb emissions, billions of people could be exposed to several weeks of deadly heat each year by the end of this century. As heat waves endanger public health and threaten to exacerbate inequities, the need to adapt by building resilience within countries and communities grows urgent.

"For every additional day at or above 80 degrees, students performed worse on standardized tests"

To guide the U.S. government, President Biden is creating an interagency Heat Illness Prevention Work Group to gain a deeper understanding of the threat that climate-fueled heat poses to citizens. The Occupational Safety and Health Administration will develop the first U.S. labor standard to protect the highest-risk workers from heat exposure. The Low Income Energy Assistance Program has expanded its mandate to increase assistance to households that cannot afford air-conditioning or do not have access to cooling centers during heat waves. This measure could help address socioeconomic and racial disparities heightened by rising temperatures. Louisiana's experience with Hurricane Ida in August 2021 demonstrates that resilience also requires weather-proofing critical infrastructure to withstand climate-fueled hazards as concurrent and compounding disasters become more common. Following the torrent of water unleashed by the hurricane, flooding left hundreds of thousands without power amid a severe heat wave. Heat exposure killed more New Orleans residents than the Category 4 storm had.

The need to strengthen resiliency against extreme heat is global. In Europe, where less than 5 percent of homes are air-conditioned, citizens do not have to wait for a storm or surging demand to knock out the power to feel the full force of scorching heat. Expanding the availability of air-conditioning and cooling centers to populations at risk, while fortifying the energy systems that sustain them, will be crucial to safeguard European communities against sweltering temperatures.

At a local level, city heat-adaptation plans can build community resilience by expanding access to cooling centers and air-conditioning, as well as ensuring freshwater availability for parched residents. To deal with localized impacts produced by ecological factors, pollution levels, community health conditions, and resource access, heat-health plans should be developed through partnerships between epidemiologists, climate scientists, and local stakeholders. Such diverse and direct participation will help communities to understand their risks and prepare to meet community-specific needs during heat spells.

Incorporating climate change and heat into educational curriculum, particularly in medical and public health institutions, will help to address critical information gaps to save lives. Universities have started to realize the need to equip future medical professionals with the knowledge necessary to manage the health threat posed by rising temperatures. Emory University plans to update its medical school curriculum to incorporate courses that will "make sure tomorrow's physicians are better prepared to practice medicine in a warming world."

Adaptation to extreme heat will require policy transformations beyond those identified above. But transformative change will not happen through a singular innovation, such as a vaccine, or by learning lessons from previous policies based only on past experience. For adaptation to climate change, the past provides a poor roadmap for the future. The future will only be transformed by governments and citizens starting to engineer and link together evolving solutions to reduce climate risk. Governments and communities can better safeguard their populations against the mounting climate threat by taking decisive steps now to prepare for unfamiliar extremes.


Madeline Babin is a research associate at the Council on Foreign Relations.