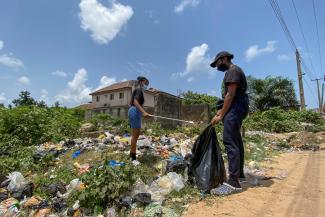 Esohe Ozigbo, a 15-year-old climate change activist, during one of her campaigns picking up trash disposed carelessly in Lagos, Nigeria, on April 16, 2021. REUTERS/Angela Ukomadu
by Naomi Beyeler and Renzo R. Guinto November 4, 2021

In the lead-up to this year's United Nations Climate Change Conference (COP26), many countries made significant commitments to increase their contributions to global climate finance. These commitments are crucial steps toward achieving the pledge made by wealthy countries in the 2015 Paris Agreement to mobilize at least $100 billion annually to support climate adaptation and mitigation in low- and middle-income countries. While there has been much focus on closing the global climate financing gap—just $79.6 billion of climate finance was mobilized in 2019—there is another critical gap that must be urgently addressed. It is the largely nonexistent funding for health sector adaptation to climate change.

Climate change harms health in numerous ways—and the 2021 Lancet Countdown report has described the present situation as a "code red for a healthy future." Sea level rise, wildfires, extreme heat, hurricanes, and floods damage our hearts and lungs, increase the risk of infectious disease, worsen mental health, reverse decades of gains in nutritional status, and cause injury and death. Climate change weakens and destroys hospitals and essential health infrastructure, and health systems are largely unprepared to respond to the rising health harms of climate change. The investment needed to build climate-resilient health systems that can withstand climate threats and protect people from climate harms is notably absent from both worlds of climate and health finance. This climate-health financing gap threatens the lives of millions, leaves health systems without critical support, and deepens global health inequity. The global community must prioritize health sector adaptation by addressing three funding challenges.

Over the past decade, only 20 percent of global climate finance targeted adaptation

Finance for climate adaptation is generally inadequate across all sectors, including health. Over the past decade, only 20 percent of global climate finance targeted adaptation, and current commitments to adaptation finance fall well short of need. While adaptation finance rose to around $20 billion in 2019, the average annual adaptation costs in low- and middle-income countries are estimated to be $70 billion today and they will climb to $300 billion by 2030. The World Health Organization's COP26 Health Report emphasizes the value of investing in health adaptation and resilience and calls on governments to allocate half of their climate finance to adaptation, especially for the health sector.

Finance for health adaptation falls through the cracks of siloed funding schemes. Almost no climate finance targets the health sector, and nearly no global health finance targets climate adaptation. Less than 5 percent of total global adaptation spending, and less than 1 percent of multilateral climate adaptation finance targets health. Of more than 200 adaptation projects supported by the Green Climate Fund and other funding pools under the auspices of the UN Framework Convention on Climate Change since 2015, none specifically focused on health. At the same time, very little development assistance for health targets climate change. In 2018, only 3 percent of international donor funding for health was allocated for climate change projects.

This trend is mirrored in domestic spending. National climate investments infrequently reach the health sector. For instance, the Philippine government's People's Survival Fund, which provides over $20 million each year to prepare the most vulnerable municipalities for climate change, has not supported any health-focused climate adaptation projects since its establishment in 2011. Meanwhile, domestic health financing rarely includes a focus on climate. Half of countries surveyed by the WHO reported receiving minimal or no funding from their national health budgets to implement climate and health strategies.

Current global finance does not adequately prioritize the most vulnerable countries or reach the local communities that should be leading the development of local adaptation efforts. The health impacts of climate change are unequally distributed between and within countries. Many of the most deeply impacted communities also have under-resourced health systems unable to withstand the growing health harms of climate change – from extreme weather events to sea level rise. This dire situation is exacerbated by the strain COVID-19 has placed on health systems and the massive financial requirements of ongoing pandemic response.

Future climate and health financing should be redistributive, targeting investments directly to impacted communities and not reinforcing inequity

While COP26 is still running, we the global health sector must say it loud and clear that health should be a top priority in climate finance. Opportunities to mobilize new finance, such as fossil fuel subsidy reform, should be pursued and re-invested in health. Global development assistance for health must also integrate and prioritize health system resilience to climate change alongside infectious disease threats like COVID-19. We must do this quick, because hard-won global disease control and health-care gains—and ambitious future health targets—will be dually imperiled in an unstable climate.

We must ensure that equity must be at the heart of these investments. Future climate and health financing should be redistributive, targeting investments directly to impacted communities and not reinforcing global health inequity. Such new funding must also be futures-oriented, as climate change will continue to adversely affect health for generations to come. Aligning climate and health investments to build climate resilient health systems will save lives now and in the coming decades in the face of the unfolding planetary emergency.

Naomi Beyeler is the climate change and health initiative lead at the Institute for Global Health Sciences at the University of California, San Francisco


Renzo R. Guinto is the chief planetary health scientist of the Sunway Centre for Planetary Health in Malaysia and inaugural director of the Planetary and Global Health Program at St. Luke's Medical Center College of Medicine in the Philippines.

Is chronic kidney disease the canary in the coal mine in terms of feeling the health impacts of climate change?

A look at how plastics are being reduced, reused, and recycled