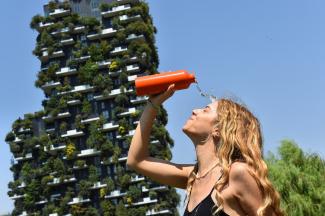 As temperatures soar during a heatwave, a woman cools herself with water near Bosco Verticale, two "green" residential towers in Milan, Italy, on July 21, 2022. REUTERS/Massimo Pinca
by Alice C. Hill September 8, 2022

Heat has broiled the globe this year. In March and April, a heat wave—multiple days or weeks of abnormally hot weather—forced schools to close and power grids to stumble in India and Pakistan. Summer brought scorching conditions to most of the Northern Hemisphere, including parts of Europe and the United States. China's summer heat wave, which has lasted 78 days, has surpassed "anything seen previously worldwide," according to weather historian Maximiliano Herrera. Stretching across almost 530,000 square miles—the equivalent of California, Colorado, and Texas combined—surging temperatures have affected more than 100 million people across China. Consequences have cascaded. The heat has drained rivers, disrupted supply chains, slowed production of hydropower, dried crops, and killed humans and animals. The government has cut power to factories and shut down air conditioning in office buildings. Cities have dimmed lights.

Heat is the most deadly weather-related disaster

Climate change has driven these heat waves. According to the United Nations Intergovernmental Panel on Climate Change, it is virtually certain that the frequency and intensity of heat waves have increased since 1950 due to global warming. And scientists predict that this year's heat hasn't hit the ceiling. Not by a long shot. In the United States, a recent study predicted heat waves that used to occur every five decades will likely happen every decade. A study forecasting changes to the global heat index—the combination of humidity and air temperature that determines how heat is felt on the human body—projected that, even if global average temperature rise is kept below two degrees Celsius from preindustrial levels, up to half a year could be "dangerously hot" by 2050. By 2100, some regions could experience those conditions year-round.

This year's extreme heat revealed that infrastructure built to withstand historic weather conditions—including past heat waves—can falter in the face of climate-fueled extremes. Communities around the globe discovered that their infrastructure is no match for the current heat extremes, much less those of future years. High temperatures stressed electric grids; melted runways, including at the UK Royal Air Force's largest airbase; buckled roads; burst pipes; and kinked rail tracks.

Heat is also the most deadly weather-related disaster. To survive the heat waves of the future, communities will need to adapt. Among the most important steps they can take is to plan for both the immediate response to a heat wave and the long-term strategies that make heat waves less damaging. To jumpstart the planning process, a number of cities across the globe have appointed heat czars to raise public awareness of the dangers to human health posed by heat, coordinate response plans, and implement longer-term solutions.

Even if temperature rise is kept to below 2°C from preindustrial levels, half the year could be dangerously hot by 2050

Short-term solutions focus on increasing awareness of how dangerous heat can be and making sure that people have access to cooler spaces. Public outreach to vulnerable populations during heat waves can also reduce deaths. After the 2021 heat wave that killed hundreds, British Columbia, Canada, created an emergency alert system for heat, and civic organizations organized efforts to provide fans, water, and transportation to cooling centers. Barcelona, Spain, has identified a network of shelters that can provide relief from stultifying heat. Seville, Spain, has adopted a policy of naming and categorizing heatwaves—like the United States does with hurricanes—to trigger actions that protect residents, such as opening cooling centers and city pools and performing welfare checks on those most at risk. The California legislature is now considering embracing the naming strategy for heat waves.

In the long term, cities must find ways to combat the "heat island effect," which occurs when buildings and pavement absorb more of the sun's heat than greener spaces and densely built areas trap hot air by blocking cooling winds. Across the American Southwest, poorer neighborhoods experience temperatures four degrees Fahrenheit higher on average than wealthier neighborhoods due to this effect.

Increasing available shade by, for example, planting trees can drive down temperatures. Miami-Dade County in Florida gives homeowners up to two trees a year and aims to boost its tree canopy 30 percent by 2032. The city of Medellin, Colombia, has created "green corridors" with tens of thousands of shrubs and trees lining roads and waterways to reduce heat by up to nine degrees Fahrenheit by 2030.

Removing dark surfaces that absorb heat can also help lower temperatures. Some areas have imposed white roof requirements to better reflect the sun's heat. A NASA study found that a white roof in New York City was forty-two degrees Fahrenheit cooler than a nearby black roof on a summer day. Almost a dozen U.S. locations have adopted "cool roof" policies.

Phoenix, Arizona, is experimenting with "cool pavement" for roadways, which can be ten to twelve degrees Fahrenheit cooler to the touch. Similarly, increasing greenery on rooftops can lower temperatures. Singapore provides incentives for builders to create green space equal in size to the footprint of the building. Greenery now sits on roofs, drapes from balconies, and clings to walls.

Water features can offer respite when heat intensifies. The city of Chongqing, China, has installed spraying systems that shoot clouds of chilled water—like the automatic misters in grocery store produce sections—on people waiting at bus stops. Similarly, Vienna, Austria, placed fog showers in some of the hottest urban areas to cool passers-by and moves mobile water fountains to hot spots around the city.

Adoption of air conditioning can also assist. However, air conditioning powered by fossil fuels further contributes to the rise in global average temperatures, and air conditioning fails to protect to those who must labor outdoors. For these populations, labor practices will need to adjust as outside temperatures become too high for workers to safely spend long hours in the sun.

One of the most important steps to fight heat—or any climate-worsened extreme event—is to ensure that decision-making accounts for the risks of the future, not of the past. Today, however, planning and building practices rarely account for those risks. For example, although model codes exist to "green" buildings, the United States still lacks a model building code to build resiliently in the face of climate change.

Ultimately, ensuring a livable future will require getting to the heart of the problem—the accumulation of greenhouse gas emissions in the atmosphere. Communities must act both to prepare for unavoidable heat and to curb emissions to avoid fueling further temperature rise.