Go to homepage
How Athens Plans to Beat the Heat
Environment 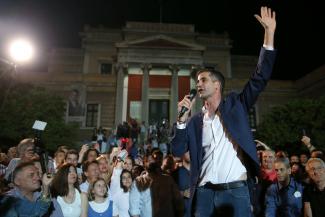 Newly elected mayor of Athens Kostas Bakoyannis waves to his supporters, at his election kiosk in Athens, Greece, on June 2, 2019 REUTERS/Costas Baltas
by Ted Alcorn February 16, 2022

Climate change may still feel far-off to some people but in Athens, Greece, it has arrived. Europe's oldest capital city is already experiencing punishing summer temperatures and raging wildfires. And it is expected to grow even hotter in years to come.

Since Athens elected him mayor in 2019, Kostas Bakoyannis has been outspoken about preparing the city for rising temperatures and reducing its contributions to global carbon emissions. He spoke with Think Global Health about addressing this leading threat to public health.

Think Global Health: How does climate change connect to the health of your constituents?

Kostas Bakoyannis: The climate crisis is directly related to the quality of life of Athenians. There is a tendency to take a 15,000-foot view of the climate crisis. To a certain extent it's justifiable, but it's only part of the picture. It's not just about top-down solutions; it's also about bottom-up solutions.

Seventy-five percent of CO2 emissions around the world come from urban centers. We all know that if we don't make the necessary changes, in a few decades, our cities will be unlivable. So, we have placed Athens in an emergency, and every decision we make—whether it's small, medium, or big—has the climate crisis at its heart. Whether it has to do with reclaiming and redistributing quality public space, or whether it has to do with sustainable mobility.

Think Global Health: What are the mayor's powers to reshape public space?

Kostas Bakoyannis: Heat is a huge issue for us—2020 and 2021 were the hottest years on record in Europe. Last summer, we experienced early and prolonged heat waves which resulted in mega-fires, with disastrous consequences for our natural habitats. At the same time, heat is a silent killer. It's estimated that almost 300 people lose their lives every year in Greece because of heat, which is one of the many reasons that we appointed the first Chief Heat Officer in Europe.

Now, talking to Greeks about heat is like talking to fish about water. But it is important that we start building awareness about the challenges that we all face. And that's why we're investing so much. Not only in pocket parks—pocket parks are wonderful, they may not change the city, but will certainly change neighborhoods—but also bigger projects. We are moving forward with a big urban revival project, which is called the Double Regeneration. It's a project that has been in discussion [for] almost twenty years, and now I'm happy to report, it’s becoming a reality.

I'm not trying in any way to idealize the situation. Athens has a difficult inheritance of poor urban planning going back to the Second World War. But one can clearly see that Athens is moving forward, as we speak, in the right direction.

Think Global Health: What are some of the steps you're taking to reduce the city's carbon emissions?

Kostas Bakoyannis: Welcome to the twenty-first century! We're investing in electric cars in our own fleet. We actually just placed, a few months ago, the largest electric charging station in Athens. The state has provided a number of incentives to upgrade cars—including taxis—to electric, which is great.

We have been moving forward with a number of interventions, for example, narrowing the car lanes in one of our biggest, most important avenues to reduce emissions.

Think Global Health: Changing the use of public space creates winners and losers. In some cases, when reclaiming streets for pedestrians and transit, there has been pushback.

Kostas Bakoyannis: I fully appreciate and respect that when one has to change one's daily habits, it's not always easy. It's not always enjoyable. But in Athens—the birthplace of democracy—we take dialogue very, very seriously.

If you come to Athens and you walk up towards the Acropolis, you're going to walk up a wonderful promenade. I think it's one of the most glorious promenades of Europe. It used to be a road for tens of thousands of cars—and now no one can imagine our city without it. So yes, change is not always easy. But change is welcome. And of course, the challenge for us is to change without losing our soul.

Think Global Health: What is within your power to change about the way that new buildings and new developments are constructed?

Kostas Bakoyannis: The regulatory framework, unfortunately, is national, so the city doesn't have the role that we would like to have. But we are coordinating with the state to give financial incentives that will help apartment buildings upgrade themselves. It starts from one's electrical utilities, one's dishwasher, and ends with windows and other bigger adjustments that have to take place in apartment buildings.

Think Global Health: What ideally would future buildings in Athens look like?

Kostas Bakoyannis: I'm hesitant to answer the question of what an ideal building would look like. This is not Brasilia; this is an ancient city with layers and layers of history, and that's what's so wonderful about it. It's a city full of surprises. But I would clearly say that the bar that we set has to do with green architecture.

Let me also give a concrete example: We're going to move forward in the next few weeks with the architectural competition for a new museum, the Archaeological Museum of Athens, which is going to be housed in Plato's Academy. And we're very clear that we want this new museum to be a green museum with the latest innovation and technology.

Think Global Health: When you think about the amount any mayor can change a city in the limited time available, how do you think about institutionalizing what you've done, so that it continues after your administration?

Kostas Bakoyannis: I'm not sure why you think that mayors change cities. This is an anachronistic paradigm of leadership. A mayor is nothing more than the conductor in an orchestra; it is the orchestra that makes the music. And in this case, the orchestra are the Athenians themselves. Institutionalization cannot happen top-down; it can only happen bottom-up.

For example, when we talk about reclaiming and redistributing public space, it may sound wonderful on paper and in an interview, but how many people are actually using this public space? In Syntagma Square—which is the main square of the city, the Constitution Square—we reclaimed public space because we wanted to broaden the lower part of the square. And literally within a few minutes, it was packed full of people. So this public space was institutionalized in the hearts and minds of the people themselves.

Think Global Health: When addressing stubborn problems like climate change or addiction, progress can be gradual. How do you govern so that the people know you're moving in the right direction?

This is one of the reasons I'm in love with local government: it's not about talking, it's about doing. It's about real solutions to your problems. It could be something that won't make the headlines, like a new playground or the fact that forty people were welcomed in our shelter last night. But this is what it's all about. It's about real life.