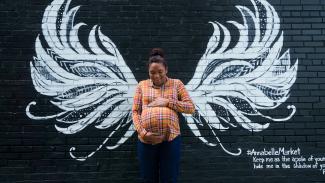 By the end of the first year of the COVID-19 pandemic, maternal deaths rose for all women in the United States, with a stark gap in maternal deaths between White and Black women.

That same year, in 2020, Black women were nearly three times more likely to die due to complications from pregnancy than White women, a disparity that has deep roots in our country's historical legacy of slavery. This legacy of slavery and discrimination lives on in our cultural norms, our national policies, our institutions, and in our health-care system. One potential solution to these disparities is through the provision of doulas. Doulas, professionals who support women before, during, and after birth, work within the health-care system to dismantle these structures and maximize positive birth experiences for mothers.

In 2020, Black women were nearly three times more likely to die due to complications from pregnancy than White women

North Carolina has a particularly poor profile when it comes to disparities in maternal mortality. The state ranked 30th out of 50 U.S. states for maternal death in 2019. Black moms were 2.9 times more likely to die from pregnancy-related issues than White moms in the state that same year. To address this disparity, the North Carolina state legislature is pushing forward legislation, sponsored by Representatives Zack Hawkins, Julie von Haefen, Carla Cunningham, and Vernetta Alston. House Bill 488: Analysis of Doula Support Services/Medicaid Coverage, introduced April 2021, lays the groundwork for the state to reimburse Medicaid recipients for doula services throughout pregnancy and after childbirth. North Carolina would be an early adopter of such legislation, putting the state at the forefront of achieving more equitable maternal health care.

A doula primarily advocates for the mother's best interests, ensuring that her voice is heard in the delivery room. Studies have shown that doula support leads to significant reductions in Cesarean section (C-section) births, births that require more significant medical intervention, induced births, and long labor times. Doulas also lower preterm birth rates, increase breastfeeding, and increase overall satisfaction with birth itself. When doulas were provided to a group of primarily Black mothers in New York City, the rates of preterm birth and low birth weight deliveries were nearly cut in half compared to women without doula support in the project area. While doula services would help all North Carolinian women, these services have the potential to make a real impact on unjust maternal outcomes for Black women.

Additionally, research suggests providers want doulas in the room with mothers during delivery. Birth Partners, a doula program that provides support for free to anyone giving birth at the University of North Carolina Medical Center, found that 100 percent of labor and delivery nurses agreed or strongly agreed that doulas were critical members of the maternity care team. This survey demonstrates that, while doulas are there to support mothers, they also support the entire birth care team.

North Carolina has a real opportunity to meaningfully affect and improve maternal health in the state through House Bill 488. The introduction of Medicaid reimbursable doula services has been shown to reduce unnecessary medical interventions and increase satisfaction with the birth experience. Further, doulas challenge the overarching authority of physicians in the delivery room, allowing space for mothers to express concerns surrounding their health. North Carolina has the chance to be on the forefront of maternal health legislation; let's make sure the state does not squander this unique possibility.

Falling Through the Cracks: COVID-19 and the Rise of Maternal Deaths in Africa