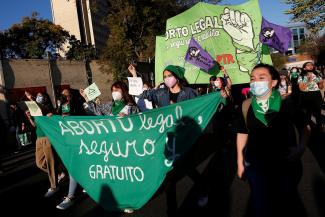 Pro-choice activists shout slogans outside Congress, where lawmakers are discussing a bill that decriminalises abortion until week 14 of gestation, in Valparaiso, Chile, on September 28, 2021. REUTERS/Rodrigo Garrido
by Samantha Kiernan October 7, 2021

Last week, the streets of Bogota, Colombia, Mexico City, Mexico, and Santiago, Chile, filled with the voices of women demanding "legal, seguro, y gratuito"—legal, safe, and free—abortions. Their marches follow two decades of Latin American protests that take place every year around September 28, International Safe Abortion Day. The day's aim is to expand access to the procedure across the conservative and religious region. Days later, similar rallies occurred in the United States in support of Roe v. Wade, the U.S. Supreme Court case that guaranteed a U.S. woman's right to abortion in 1973 but now faces renewed legal challenge.

Though often framed as a social, legal, or religious question, abortion is fundamentally an issue of women's health. The procedure is a medical or surgical termination of a pregnancy and, when performed by qualified persons under safe conditions, complications are rare. However, when restrictive laws and practices, high costs, and limited services create barriers to access, women still seek the procedure—they just resort to dangerous options. The World Health Organization has stated that "access to legal, safe, and comprehensive abortion care, including post-abortion care, is essential for the attainment of the highest possible level of sexual and reproductive health."

As women around the world fight to maintain and expand access to safe and legal abortions, it is worth reflecting on the current state of global abortion access and where progress still needs to be made.

Access to legal, safe, and comprehensive abortion care is essential for the attainment of the highest possible level of sexual and reproductive health

For many countries, 2021 has been a year of major milestones in the fight for expanded access to abortion.

Over the past year, Argentina and Thailand legalized abortion, while Mexico and South Korea formally decriminalized the procedure. Residents of the European microstate San Marino overwhelmingly supported a referendum to overturn the country's 150-year-old law criminalizing abortion. Similarly, the lower house of the Chilean Congress voted to craft a new law that would bar prosecution of women who receive abortions in the first 14 weeks of pregnancy. U.S. President Joe Biden also revoked the controversial Mexico City Policy, a policy that denies U.S. aid to foreign nongovernmental organizations if they support, provide information on, or advocate for abortion.

These changes have culminated in a high-water mark for global abortion access—continuing two decades of accelerating progress towards expanded international access to abortion. According to the Center for Reproductive Justice, 72 countries now allow abortion on request. This means that a total of nearly one billion women, representing 59 percent of women of reproductive age (15 to 49 years), now live in countries that broadly allow abortion.

Poland, for instance, has begun enforcing a near-total ban on abortion after its constitutional court overturned a 1993 abortion law under which almost all legal abortions in Poland are performed. In September, China called for reducing "non-medically necessary abortions," which experts have warned could be a bellwether for broader restrictions on reproductive health. On the other side of the world, the U.S. Supreme Court allowed the state of Texas to implement a law that prohibits abortions after six weeks, regardless of rape, sexual abuse, or incest. The nation's highest court also seems likely to further limit abortions—or overturn the U.S. constitutional right to abortions entirely—in its fall term.

Even among countries permitting abortion upon request, not all access is equal. China, for instance, does not have an explicit gestation limit: the maximum number of weeks after a woman's last menstrual period in which she can legally undergo an abortion without special exemptions. Nationally, the United States permits abortion until a fetus is viable—or capable of living, under normal conditions, outside the uterus—which is normally around 24 to 26 weeks. More than one third of U.S. states, however, prohibit abortion after 20 weeks. Additionally, the average European country limits abortion after 12 weeks, and no European country broadly permits abortion after 24 weeks.

It is also important to note that a legal right to abortion does not guarantee that women have safe and comprehensive access to the procedure, particularly where social, economic, or other barriers exist. In Argentina's rural provinces, where religious influences remain strong, doctors have refused to perform abortions even after legalization. Similarly, in Northern Ireland, which was forced by London to permit abortion in 2019, legal and bureaucratic challenges have inhibited the implementation of services, limiting women's access.

The Need for Legal, Safe, and Affordable Abortions

The goal of legalizing abortion is not to increase the number of procedures performed, but to ensure that women have access to safe, comprehensive, and affordable reproductive health care. Notably, however, legalizing the procedure does not inherently result in more abortions per capita.

Despite an increasing number of countries expanding access to abortion over the past decades, the global abortion rate has remained surprisingly stable. Researchers estimate that from 2015 to 2019, 73.3 million abortions occurred per year, translating to a rate of 39 abortions per 1,000 women aged 15–49 years old. In 1990, the global rate was 40 abortions per 1,000 women of reproductive age.

However, as with most global averages, trends are not uniform across regions, income, or countries. By region, the most significant decreases in abortion rates have occurred in areas where abortions are legal and access to other types of reproductive health services is widely available. Unlike the rest of the world, Europe, North America, Australia, and New Zealand experienced significant decreases in both unintended pregnancies from 1990 to 2019 and the percent of unintended pregnancies that ended in abortion. This reflects widespread access to contraceptives and information on safe sex practices

When abortion is illegal or restricted, women often turn to unsafe options or untrained providers. Research suggests that 45 percent of annual abortions are unsafe and that nearly 7.9 percent of global maternal deaths result from these unsafe terminations of pregnancies. Latin America and Sub-Saharan Africa—regions where access to abortion remains highly restricted—suffer the highest rates of maternal mortality from unsafe abortions at 9.9 percent and 9.6 percent respectively. Therefore, the best way to protect women's health is not to reduce access to care, but to decrease the need for dangerous alternatives.