Go to homepage
A Holy River at Risk
Environment

A Holy River at Risk

The iconic Jordan River is threatened by pollution, overuse, and climate change, but efforts are underway to save it 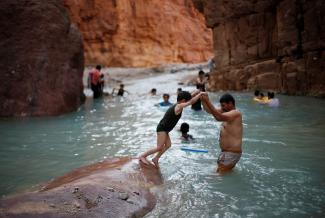 People swim in a river in the Valley of al-Zara, which flows into the Dead Sea, in Jordan, on November 5, 2016. REUTERS/Muhammad Hamed
by Zoe H. Robbin, Jack Bavaria Pearson, Timothy Purvis December 19, 2022

The Jordan River Valley and its neighboring ecosystems are foundational to the Abrahamic faiths: Judaism, Christianity, and Islam. In the Bible, the Jordan River serves as the barrier between Abraham and Lot's land, demarcating the land that God entrusted to the Abrahamic faiths, according to religious texts and leaders. The river also plays a role in the stories of Moses, Joshua, and several other prophets central to the early history of these monotheistic faiths. During the history of early Christianity, John the Baptist preached in the area surrounding the Jordan River, and baptized Jesus in its waters, according to the Bible.

Visitors from all over the world make pilgrimages to its riverbanks to perform religious rituals, including baptisms. But climate change and human action have depleted it, including what's thought to be the site of Jesus's baptism, with some environmental scientists arguing that the water quality has become unsafe for religious ceremonies. Running from the Sea of Galilee south to the Dead Sea—along the border between Jordan, the Palestinian West Bank, Israel, and southwestern Syria—efforts are underway to restore the biblical waterway, with farmers modernizing their methods and policymakers collaborating across borders.

Overuse and pollution have degraded these sites with 95 percent of the river's flow now diverted. A main cause of the river's deterioration is resource competition between Israel, Jordan, Palestine, and Syria, which all rely on it. "Conflict-induced refugee influxes" have further strained the region's scarce resources, expanding the number of people who are dependent on the watershed. Climate change has decreased rainfall and led to overuse of other limited water resources in the region.

The baptism site is emblematic of other regional water issues—deeply important to the region and its history and cultures, yet caught in a trade-off between acute needs and long-term sustainability. Farmers are using modern agriculture methods in an attempt to navigate this trade-off, growing their crops while salvaging the sacred river. Solutions such as drip irrigation and greenhouses that target the consumption and efficiency of water have been spreading throughout the Jordan Valley.

National initiatives for water and agriculture call for the expansion of soilless agriculture methods, which grow crops in an indoor and controlled environment to reduce water demands. Research is underway to promote sustainable farming that aligns with the needs of local agriculture, shifting away from water intensive crops and moving toward water efficient options. These combined initiatives may limit overdrawing of the Jordan River in the coming years.

However, reducing consumption is not a sufficient strategy to save the Jordan River from its bleak prospects. Israel already relies on desalination from the Mediterranean Sea for 55 percent of its domestic water use and recycles 90 percent of its water. Policymakers are using modern desalination methods to produce potable water from the Red Sea and pipe it to the northern cities of Jordan, with more than $2 billion in investment. This strategy will decrease the overall water demand from aquifers and surface sources, strengthening the resilience of the Jordan River Basin. National projects in the countries bordering the Jordan River also compliment local initiatives to treat and recycle water.

The result is a region-wide push to restore the river's beauty, ecosystems, and prominence. These efforts will prove beneficial to the region by increasing the climate resiliency of the agriculture sector, reducing its dependence on the Jordan River.

With time running out to save the river, politicians are beginning to approach environmental conservation and climate diplomacy with urgency. The Israeli government is working on a plan to prevent waste and saline water from entering the Jordan River. Israel will release additional fresh water from the Sea of Galilee totaling 70 million cubic meters maximum each year, a contribution made possible by Israel's desalination capacity.

Farmers in the Jordan Valley will receive treated wastewater for their crops through the plan, enabling them to increase water efficiency and conserve scarce fresh water. Conservationists estimate that these climate adaptation measures can help recover 50 percent of the biodiversity lost due to pollution and freshwater diversion. Meanwhile, visitors and residents hope that these changes will rescue the Jordan River from its hazardous levels of pollution, enabling people to swim and perform baptisms without risking illness.

Climate diplomacy will be fundamental to saving the Jordan River. At this year's UN climate conference, COP27, in Sharm El-Sheikh, Israel, Jordan signed an agreement committing to restore the Jordan River. While the plan’s details remain unclear, some reports suggest that both countries will work to reduce pollution in the Jordan River by improving sewage treatment in surrounding communities.

Jordan, Israel, and the UAE also affirmed their commitment to a water-energy exchange that would see Israel pumping desalinated water into the Sea of Galilee and down the Jordan River. However, Palestine is notably absent from both agreements, though the Jordan River runs along its border.

In addition to its religious significance, the Jordan River is an economically important waterway—700,000 Jordanians, 30,000 Israelis, and 60,000 Palestinians make a living from agriculture in the Jordan Valley. EcoPeace Middle East, a regional environmental nonprofit organization, estimates that the rehabilitation of the Jordan River and Jordan Valley could result in a multi-billion dollar boost to the GDP of Israel, Palestine, and Jordan.

The Jordan River Valley has and continues to bind the disparate communities along its banks, nurturing its inhabitants through its resources and spiritual significance. In biblical times, the Jordan River was a place of reflection and repentance. Today, it represents a microcosm of global issues that require immediate attention.


Jack Bavaria Pearson is a Fulbright research fellow in Jordan studying water conservation and conservation communication. He has a bachelor's degree from Montana State University where he studied Science Writing and the History of Science. The views expressed in his writings do not represent the views of the Fulbright Program, the U.S. Department of State, or any of its partner organizations.


Timothy Purvis is a researcher based in Jordan studying water, agriculture, technology, and their impacts on public health. He received a bachelor's degree in mechanical engineering at Georgia Tech and a Master’s degree in Environmental Engineering from the Gillings School of Global Public Health at UNC Chapel Hill. The views expressed in his writings do not represent the views of the Fulbright Program, the U.S. Department of State, or any of its partner organizations