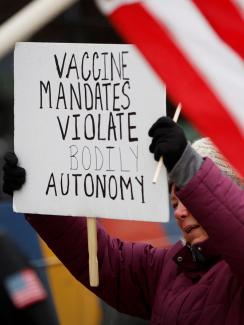 A protester at a rally against mandates for COVID-19 vaccines, outside the New York State Capitol in Albany, New York. REUTERS/Mike Segar
by Elle Ruggiero December 19, 2022

The COVID-19 pandemic has become the latest of historical examples illustrating the tension between the needs of public health and the right to religious liberty in the United States. Ten percent of the U.S. population claimed that receiving the COVID-19 vaccine conflicted with their faith, and thousands requested religious exemptions from COVID-19 vaccine mandates. This has prompted new insights into the justification of vaccine mandates, the basis of religious exemptions, and the subsequent consequences for public health during the pandemic.

When Vaccine Mandates Are Justified

The United States has "a long tradition of recognizing that some public health efforts are necessary to fight public health threats," says Arthur Caplan, the founding head of the Division of Medical Ethics at NYU Grossman School of Medicine in New York City. Those efforts include vaccine mandates, requirements issued by the government or other authority stipulating that one must receive a vaccine in order to access a specific benefit, like attending school or work. Despite having garnered significant attention during COVID-19, the use of public health mandates for vaccination predates the COVID-19 pandemic by centuries—Massachusetts became the first state to require immunizations against smallpox for infants in 1855. A study published in The Lancet in July found that historically, vaccine mandates have been effective at both increasing vaccine uptake and reducing disease in the United States.

Though many experts agree that vaccine mandates should be used in cases of extraordinary threats to public health, opinions differ as to whether the severity of COVID-19 warranted such measures. For Daniel Sulmasy, a practicing physician and director of the Kennedy Institute of Ethics at Georgetown University, public health should opt for the least invasive measure necessary in order to obtain the common good. He says that the pandemic did not reach the level of crisis where the government could mandate that "someone take the step of forcibly injecting something into their body against their will."

Paul Offit, an attending physician in the Division of Infectious Diseases at Children's Hospital of Philadelphia, shared a different perspective. After witnessing how quickly the hospital's floors filled with patients, many of whom died from the virus or conditions associated with the disease, he considers SARS-CoV-2 to be "the worst respiratory virus [he has] ever seen."

"There comes a time when societal good should trump individual freedoms. And [the pandemic] was that time," Offit says.

COVID-19 as a Justifiable Threat

Since the initial outbreak in January of 2020, the United States has been severely affected by the pandemic, accounting for more than 25 perent of total COVID-19 cases worldwide. Almost three years into the pandemic, Americans are dying from COVID-19 at far higher rates than people in other high-income countries. Nearly half of these deaths occurred after vaccines became widely available in the United States. Epidemiologists have pinpointed America's failure to fully vaccinate over seventy percent of the population as a reason for its high and enduring infection and fatality rates.

Multiple studies from around the world have shown that the COVID-19 vaccine is effective in reducing the risk of infection, hospitalization, and death. When the Omicron variant surged in January and February of 2022, the unvaccinated died at almost seven times the rate of the fully vaccinated and at twenty times the rate of people with boosters. During this time in the pandemic, America’s unvaccinated population placed immense strain on the country's health-care system, overloading hospitals, exhausting resources, and spreading the disease throughout their communities.

The public health measures designed to increase vaccine uptake faced significant roadblocks. Between July and November of 2021, President Joe Biden issued a series of vaccine mandates for federal employees, large private companies, and health-care workers. While the Supreme Court blocked the Biden administration from enforcing its requirements on private employers, the requirements for federal employees and health care workers remained in effect. Many public and private employers also mandated that their workers receive the vaccine in order to enter the workplace. With these mandates in place, individuals could request exemptions if the vaccine conflicted with their sincerely-held religious beliefs.

Understanding the Basis of Religious Exemptions

Religious exemptions from the COVID-19 mandate fall under the right to practice one's religion, which is protected in various ways: the Free Exercise Clause of the First Amendment to the Federal Constitution, the Federal Religious Freedom Restoration Act, individual state constitutions, and state-level Religious Freedom Restoration Acts. Under these laws, individuals should not be required to violate their religious beliefs without a compelling reason.

"Religious liberty is the most fundamental grounding of a free society. It goes right to the heart of people living according to what they believe is true and good and not getting pressure from the states to do what they believe is wrong and unfaithful," says Farr Curlin, a professor at Duke University's Trent Center for Bioethics, Humanities, and History of Medicine.

Like other freedoms, however, religious liberty has limits. Douglas Laycock, a law professor at the University of Virginia School of Law, argues that claiming a religious exemption from the COVID-19 vaccine is "one of the exceptional cases where a limitation on religious liberty is justified."

While Americans have refused vaccines on religious grounds for decades, the number and intensity of religious objections to the COVID-19 vaccine were unprecedented. From New York to California, hundreds of thousands of workers requested religious exemptions, putting employers in charge of adjudicating the sincerity of these claims. Daniel Hall was recruited by his employer, the University of Pittsburgh Medical Center, to serve on their adjudication committee for exemptions from the COVID-19 vaccine. He assessed thousands of individual cases brought forth by the hospital system's employees. Hall's background as a general surgeon and a priest in the Episcopal Church was an asset to the committee, yet, he says, "it was not [my] responsibility to prosecute these people and enforce the law." He suggests that employers are especially ill-suited to adjudicate the sincerity of religious claims, as objections to the vaccine may be seen as political, philosophical, or personal rather than religious.

No major religious denomination officially discouraged people from receiving the COVID-19 vaccine. In fact, many religious leaders openly encouraged them, describing vaccination against COVID-19 as a moral responsibility and "an act of love."

Law professor Laycock says only a portion of claims against the vaccine were truly religious in origin. While some had sincere concerns about the use of fetal tissue in vaccine development, others used the vaccination to take political stances on the pandemic. According to Laycock, religious objections were "based in right wing opposition to President Biden and Dr. Anthony Fauci, or they were based on a preexisting anti-vaxxer ideology, or they were based on confusion about the science induced by right-wing and anti-vaxxer propaganda." Still, employers struggled to challenge false claims in fear of being sued. As a result, it became both practically and politically challenging to protect public health during the pandemic.

Given the high volume of religious exemptions from the COVID-19 vaccine, changes to the vaccine mandate framework are needed to ensure that the majority of the population is protected the next time an infectious disease as dangerous as COVID-19 comes along. Dorit Rubinstein Reiss, a law professor at University of California's Hastings College of Law, explains that once vaccine mandates are issued, they should be reassessed intermittently to determine if the circumstances still justify the measures in place or if they require revisions. While periods of high risk warrant more coercive measures, mandates should be recalibrated as the population gains immunity and the severity of the infection declines. Reiss says that constructing a framework that clearly corresponds with the level of threat builds greater trust within communities and promotes the acceptance of measures required to protect public health, allowing for vaccine mandates to be more stringent with religious exemptions during high-risk periods.

Mandate policies cannot be the country's only approach to increase vaccination uptake and confidence. Religious exemptions could be used as a proxy for Americans' political objection to the vaccine, distrust in the health care system, and discontent with the country's pandemic response. In medical ethicist Caplan's view, public health efforts at the local level are better suited to target these specific behaviors.

More education, outreach, and public engagement programs can be successful in communities susceptible to vaccine misinformation and hesitancy. During the pandemic, public health experts and scientists failed to communicate regularly with the population and struggled to combat the spread of false and misleading information about COVID-19 and the vaccine. In this tense and distrustful atmosphere around health, the role a trusted messengers plays in conveying the safety and effectiveness of vaccines cannot be overemphasized. Many physicians have emerged as that figure within their local communities. One surgeon in Philadelphia, Ala Stanford, encouraged over 50,000 of North Philadelphia's residents to get vaccinated, meeting with them in their living rooms to explain the benefits of and clarify misconceptions about the COVID-19 vaccine. Local leaders like Stanford offer a way forward for improving vaccine coverage in the United States.