The Glasgow Summit and U.S. Foreign Policy on Climate Change

Domestic politics, not diplomacy, will determine what "America is Back" means for climate change 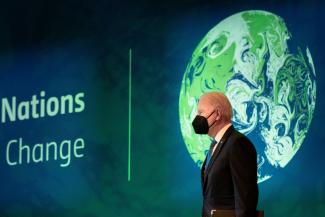 U.S. President Joe Biden prepares to deliver a speech during the "Action on Forests and Land-Use" event at the UN Climate Change Conference in Glasgow, Scotland, on November 2, 2021. Erin Schaff/Pool via REUTERS
by David P. Fidler November 15, 2021

The Glasgow climate change summit has ended. For some, the pledges made and the Glasgow Climate Pact agreed upon at the twenty-sixth conference of the parties (COP26) of the UN Framework Convention on Climate Change revived a sense of promise that countries can eventually stop "man's dominion" from further breaking "Nature's social union"—to steal from Scottish poet Robert Burns. For others, COP26 deepened the sense of peril that Glasgow has joined decades of failed summitry in leaving "us nought but grief an' pain" on climate change in the future.

The same juxtaposition of promise and peril emerged from U.S. participation in COP26. "America is back" in climate change diplomacy had more than one meaning at Glasgow. President Joe Biden's determination to make COP26 a turning point in U.S. and global policy contributed to summit accomplishments. But those following COP26 could see that U.S. domestic politics continues to damage prospects that the United States can deliver on its climate promises. As in the past, the Glasgow summit revealed the United States to be both diplomatically indispensable and politically unreliable on climate change.

The "Best-Laid Schemes" of Joe and John

The grim science and growing dangers of climate change meant that COP26 would be—succeed or fail—the most consequential climate summit ever held. From rejoining the Paris Agreement on his first day in office, President Biden made climate change pivotal for restoring U.S. leadership and the credibility of democracies in addressing global problems. Climate change funding and programs proposed in the Infrastructure Investment and Jobs Act and the Build Back Better Act became centerpieces of the president's domestic agenda. In Glasgow, President Biden declared that, through this legislation, the United States would make the "most significant investment to deal with the climate crisis that any advanced nation has ever made."

In foreign policy, President Biden appointed former senator and secretary of state John Kerry as his climate change envoy to rally other nations and make COP26 the moment when governments would finally decide to stem global warming collectively. Before the Glasgow summit, Secretary Kerry asserted that U.S. diplomacy resulted in "more than half of the G20 and countries around the world" increasing their climate commitments and ambitions. These foreign policy efforts converged with the administration's domestic endeavors to produce the historic U.S. mitigation and adaptation commitments that President Biden made before COP26.

President Biden touted what remained on climate change in the Build Back Better Act, but Congress did not pass the pared-down bill during COP26. Its prospects became more fraught when Senator Manchin raised additional concerns about it given bad news on inflation for the U.S. economy. The president's promises about unprecedented domestic action started to resemble previous threadbare American rhetoric on climate change. In this context, President Biden's apology for his predecessor's climate policies and his acknowledgement that the United States has not led by "the power of our example" on global warming sounded less like redemptive contrition than continued impotence.

COP26 did not produce the restoration of either U.S. leadership on climate change or global confidence that democracies can rise to the challenge

"O, What a Panic's in Thy Breastie"

During the summit's first week, the U.S. government joined various pledges, including to end deforestation, cut methane emissions, and stop public financing of international fossil-fuel projects. Given the Biden administration's domestic legislative, economic, and political travails, these promises were under a cloud of skepticism that the U.S. government could deliver on them. The cloud darkened considerably when U.S. elections on November 2 delivered gobsmacking losses to the Democratic Party.

This outcome provided evidence that voters are not rewarding Democrats for President Biden's climate policies and contained warning signs about the party's prospects in the 2022 elections. Spooked by the ballot-box shellacking, President Biden and progressive Democrats in the House of Representatives reversed course and passed the infrastructure bill before the Build Back Better Act. This panicky flip-flop meant the infrastructure bill's climate provisions did not make much of an impression in Glasgow.

COP26 observers could be forgiven for sensing that conflict over climate change was emerging among Democrats. Senator Manchin's disruption of President Biden's agenda infuriated many Democrats in Congress, but the November 2 election results communicated that voters wanted more Manchin and less Biden from the Democratic Party. During Glasgow, Democrats appeared divided over climate policies—hardly a foundation for U.S. leadership during what President Biden calls the upcoming "decisive decade" for climate change.

COP26 also surfaced tensions within the Republican Party. Formed in June by about seventy Republicans in Congress, the Conservative Climate Caucus traveled to Glasgow to engage on—rather than deny—the climate problem. During COP26, former president Donald J. Trump doubled down on climate change being a hoax and launched vendettas against the Republicans in the House of Representatives who voted for the infrastructure bill. With polling showing most Republicans unconvinced that climate change is a serious problem, Trump's grip on the party makes the Conservative Climate Caucus look like a "wee, sleekit, tim'rous, cowrin beastie" in MAGA-land. The U.S.-China agreement will also draw Republican accusations that President Biden and the Democrats are weak on China. These dynamics around COP26 do not mean that the Republican Party will always follow Trump's views on climate, but they suggest that policy change in the party will take time when time on global warming is running out.

And Forward, We "Guess an' Fear"

The Glasgow Climate Pact and the various COP26 pledges have experts speculating whether the commitments, if fulfilled, can achieve just enough of what science indicates is necessary and what justice holds is equitable for efforts against climate change to persevere with some hope. The promises made by the United States are important, even if they disappointed climate scientists and activists, and U.S. diplomacy helped the Glasgow summit achieve what it did. However, for the United States, the guesswork underway about the likely impact of COP26 cannot ignore that American politics again threaten U.S. foreign policy on climate change. What happened at Glasgow highlights that domestic politics remain unreliable for U.S. climate commitments to take root, germinate, and survive long enough in the American body politic to help bend the planet's climate trajectory urgently away from what so many people fear is coming.

Adapting to Climate Change in the Zanskar Valley

Deep in the Himalayas, lessons from local to global