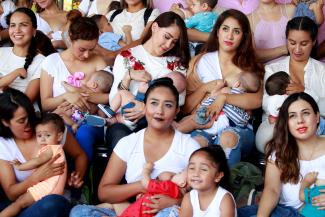 "Breastfeeding is a natural 'safety net' against the worst effects of poverty."

These words, attributed to former UNICEF Executive Director James P. Grant, have been quoted everywhere, from a British parliamentary debate to a myriad breastfeeding websites.

The quote continues, "Exclusive breastfeeding goes a long way toward cancelling out the health difference between being born into poverty and being born into affluence. It is almost as if breastfeeding takes the infant out of poverty for those first few months in order to give the child a fairer start in life and compensate for the injustice of the world into which it was born."

Decades after Grant uttered these words a comprehensive study from the Institute for Health Metrics and Evaluation, models and maps exclusive breastfeeding (EBF) prevalence - the practice of giving infants only breast milk for the first six months of life - across low and middle income countries (LMICs) between 2000 and 2018. It predicts that subnational inequalities of EBF practice will remain widespread in several countries through the year 2030.

Based on current trajectories, only six LMICs (Burundi, Cambodia, Lesotho, Peru, Rwanda, and Sierra Leone) are projected to meet the WHO's Global Nutrition Target of 70 percent or greater EBF prevalence by the year 2030 at a national scale.  And only three LMICs will likely meet this target in all their district-level units (Burundi, Lesotho, and Rwanda). This means that millions of children will continue to be denied the nutritional and immune-protective properties provided by breastmilk, and may be at increased risk of dying from diarrhea and pneumonia due to exposure to pathogens from supplementary food and water sources, especially where access to clean water is lacking. Additionally, the proven maternal health benefits of exclusive breastfeeding, such as decreased postnatal bleeding, weight reduction and lower incidence of breast and ovarian cancers, are also lost.

While room for improvement remains, success stories can be seen in several South and Southeast Asian countries, where EBF levels have increased or high levels of EBF have been sustained. Between 2000 and 2018, some of the most noticeable increases were seen in Vietnam, which had an annualized increase of 2.5 percent in EBF practice, to over 26 percent in 2018. Similarly, Cambodia, Indonesia and Bangladesh also had relatively high annualized increases in EBF, while Nepal and India sustained EBF levels above the original WHO Global Nutrition Target of 50 percent or higher.

A myriad of cultural, social, socioeconomic, individual, and health system factors influence the likelihood of a mother successfully exclusively breastfeeding her child. A 2018 systematic review in South and Southeast Asian countries found that  common barriers to breastfeeding across Bangladesh, India, Vietnam and Nepal included family or cultural traditions of discarding colostrum due to misconceptions about its safety, prelacteal feeding (at home or in tertiary care hospitals), and supplementary feeding. Less support from family and low milk secretion were also cited as reasons that EBF was not maintained.

Indicators of higher socioeconomic status, such as urban setting, mothers' employment, higher levels of education, and household food security status meant that women were more likely to turn to breast-milk substitutes, such as formula. Furthermore, the inadequacy or lack of health-system interventions, including the absence of antenatal visits or postnatal exams, low level of interaction from health-care workers, and infrequent breastfeeding counseling, were also barriers to EBF.

Indicators of higher socioeconomic status meant that women were more likely to turn to breast-milk substitutes, such as formula

Alive & Thrive's Framework for infant and young child feeding programs - implemented in Vietnam, Bangladesh, and India, among other countries - has demonstrated that successful interventions have engaged not only mothers, but also multiple levels of their support systems, including family members, service providers and community leaders, multi-sector staff, employers, and policymakers. The framework indicates that data should be strategically used to identify where breastfeeding support interventions are most needed, and to inform program design to fit the local context. Health workers can then be trained to educate mothers and families through home visits and health facility visits, utilizing interpersonal communications to provide individual breastfeeding counseling or community mobilization to initiate peer-counseling groups to support behavior change. Media and mass communications, such as radio and television campaigns, reinforce messages, drive demand for health services, and dispel misperceptions of the adequacy of breastmilk and need for water in infancy. The framework also promotes advocacy to enact policies in order to create an environment supportive of breastfeeding.

Strategies that build collaboration among communities, health workers, employers, and legislators to attain maternal and child health goals can provide the necessary support to mothers to practice EBF. In Indonesia, for example, a multilevel breast-feeding promotion program that applied "advocacy, training, media, and home visit counseling" at the individual, family, community, and health facility levels demonstrated a tenfold higher EBF prevalence at 6 months compared to the control group (37.0 percent versus 3.7 percent). Peer support groups in India and Bangladesh showed significantly improved EBF, and in Nepal, having friends who practiced EBF influenced mothers' practice.

Improvements in EBF in Vietnam, Cambodia, and Nepal can be attributed to the 95 percent or more of districts implementing community programs, with primary health-care facilities offering individual breastfeeding counseling, the latter of which was also available in Indonesia. Additionally, Nepal's gains, across all districts, can be attributed to its multi-sectoral program integrating agricultural activities, with water, sanitation and hygiene programs, and family planning, with essential child nutrition and breastfeeding counseling carried out in 42 of its 77 districts.

Among the most influential policies for supporting breastfeeding are maternity leave legislation and adherence to the International Code of Marketing Breastmilk Substitutes (or "the Code"). According to the Breastfeeding Scorecard, Vietnam and India are the only two of the six LMICs projected to meet the WHO's Global Nutrition Target of 70 percent or greater EBF prevalence by the year 2030, that fully met the International Labor Organization’s recommendations for appropriate workplace nursing areas and a minimum of fourteen weeks paid maternity leave, while Bangladesh met the leave length only. Vietnam recently implemented six months of paid maternity leave, funded entirely by social security, eliminating the barrier for working mothers to successfully practice EBF.

In order to protect mothers' informed decision, the Code bans distribution of free formula samples, as well as misleading promotional materials that claim a product's superiority over mothers' milk. According to the Breastfeeding Scorecard,  Bangladesh, India, and Vietnam are among the few LMICs that are substantially aligned with the Code. Vietnam's ban of breastmilk substitute marketing was in tandem with an institutionalization of the WHO's 10 Steps for Successful Breastfeeding standards in public and private hospitals, with costs covered by the health system. An analysis of the rollout of these interventions determined that this combined strategy may be associated with a more than 28 percent change in EBF over a five-year period.

Breastfeeding is obviously cheaper than the cost of infant formula,* but it is not free. The World Bank estimates an investment of $4.70 per live newborn is needed to meet the WHO GNT for EBF by 2025. Nepal is one of the five LMICs in the recently published analysis that had met or exceeded funding needs in 2018, contributing about $5 per newborn. National leaders in LMICs should consider the potential cost savings that this investment would earn; EBF can prevent the costs incurred from child diarrhea and pneumonia, which have significantly higher price tags at $13-15 per child for diarrhea treatment and $14-19  per child for pneumonia treatment across South and Southeast Asian countries.

The cost burden of not breastfeeding is estimated to amount to $302 billion in economic losses annually, or 0.49 percent of world gross domestic product. Nations that invest in the cost-effective initiative of promoting and educating on EBF, and that uphold a society, health system, and legislation supportive of EBF, have a lot to gain both financially and productively.

*The cost of 400g of formula ranges from $2.53 to $13.22 in the South and Southeast Asian region, amounting to 13.8 percent, 20.5 percent, and 47 percent of the average monthly earnings of employees in Indonesia, Thailand, and Vietnam, respectively.

EDITOR'S NOTE: Natalia Bhattacharjee is employed by the University of Washington's Institute for Health Metrics and Evaluation (IHME), which leads the Global Burden of Disease study described in this article. IHME collaborates with the Council on Foreign Relations on Think Global Health. All statements and views expressed in this article are solely those of the individual authors and are not necessarily shared by their institution

Natalia V. Bhattacharjee is a lead research scientist on the Forecasting Health System (FHS) Team at the Institute for Health Metrics and Evaluation (IHME) at the University of Washington in Seattle.


Lauren E. Schaeffer is a Program Officer at Medical Teams International where she supports humanitarian programs in Colombia and Guatemala. She is a former Peace Corps volunteer in Cambodia and holds a master’s degree in global health from Harvard T.H. Chan School of Public Health.

Creating surgical and anesthesia capacity is a win for pandemic preparedness