The Escalation of the Ukraine War and Global Health 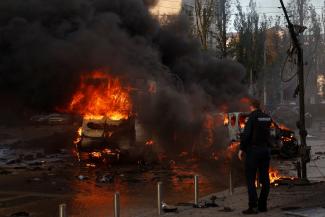 Cars are on fire after Russia's missile attack in Kyiv, Ukraine, on October 10, 2022. REUTERS/Valentyn Ogirenko
by David P. Fidler October 13, 2022

Already considered the greatest threat to European security since World War II, the armed conflict between Ukraine and Russia became more troubling this week when Russia launched missile strikes on Ukrainian civilian targets in retaliation for the October 8 attack on a bridge linking Russia and Crimea generally attributed to Ukraine. These strikes constitute an escalation of the war by Russia and mark a new phase of the conflict that has implications across many policy areas. For global health, this turn of events threatens to increase the scope of military violence, the scale of human suffering, and the severity of the challenges that the global health community must navigate in coming years.

The Path to Hell Is Paved With Strategic Escalations

The retaliatory strikes against Ukrainian civilian infrastructure and populations signaled that Russia had shifted the conflict toward "total war" for Ukraine. But these strikes are the product of a series of setbacks that have damaged Russia's ability to achieve its war aim of subjugating Ukraine and to continue claiming great power status.

Most prominently, Ukraine's retaking of territory through offensive operations reinforced mounting perceptions around the world that Russia's military is weak, its leaders are incompetent, and the Kremlin is entirely culpable for the misery that the war has caused. Ukraine's battlefield gains have stoked its defiance against Russian aggression, solidified the commitment of the United States and NATO to back Ukraine, and chilled whatever tepid support Russia had from some nations. This turning of the tide in the war strengthened prospects that Russia could suffer something once unthinkable—strategic defeat.

In response, Russian President Vladimir Putin started down the road of escalation before the attack on the Crimean bridge last weekend. He conscripted more soldiers, issued veiled threats to use nuclear weapons, attempted to sabotage pipelines supplying oil and gas to Europe, and annexed parts of eastern Ukraine. The retaliatory strikes after the bridge attack were another step on an escalatory path taken to stave off a strategic defeat that would be catastrophic to Putin's leadership and Russia's status as a great power.

Putin's actions conform to a pattern repeated during countless armed conflicts across history. Faced with strategic defeat, belligerents in war often expand what they are willing to do at home, on the battlefield, and against the people of enemy nations. The power of this impulse to escalate informs international human rights law's regulation of emergency measures during war. It also helps explain international humanitarian law’s prohibitions on weapons that cause superfluous injury and unnecessary suffering, military operations that cause indiscriminate or disproportionate loss of civilian life, intentional attacks on civilian infrastructure or populations, and annexation of occupied territory.

Global Health on This Path to Hell

History also teaches that strategic escalations wreak greater havoc on health, health systems, and the social determinants of health. The first months after Russia's February 2022 invasion of Ukraine provoked much concern from global health experts, including those at the World Health Organization. These concerns deepened as the invasion stalled and a war of attrition began with terrible health consequences in Ukraine and beyond—both direct harms (for example, damage to the physical and mental health of injured and displaced people and to medical services within the country) and indirect threats (for example, disruption of food and other agricultural supplies to low-income countries). Putin's escalation of the war darkens the picture for health considerably because it increases the scale, duration, and stakes of the conflict.

Unfortunately for health, defeating strategic escalations during war usually requires expanded military activities, which—even if conducted in accordance with international law—increase the death, destruction, and disruption that armed conflicts produce and the time needed to end the war. If mobilization enables Russia to put an estimated 300,000 additional troops on the battlefield, fighting this reinforced army will challenge, and take a toll on, Ukrainian efforts against Russia. As the missile attacks on Ukrainian civilian targets demonstrate, Russia retains the firepower—and the ruthlessness to use it—that can kill, injure, and damage infrastructure critical to health and well-being. The Russian retaliatory attacks have prompted Ukrainian calls for more and different weapons and promises from the Group of Seven to support Ukraine "for as long as it takes." These responses repeat the age-old pattern of strategic escalations begetting expanded military conflict that transpires over a longer period.

Russia's escalation creates other harmful implications for global health. The threat to security and democracy in Europe and the international order posed by Russia's invasion has forced countries to expend ever increasing political, economic, diplomatic, and military resources on this crisis. This massive diversion has made it harder to sustain attention on pressing global health challenges, including recovery from COVID-19, improving pandemic preparedness, and adapting to climate change. The escalated and expanded Ukraine war pushes back the timeline for achieving better global health governance and outcomes on the scale needed.

The Path to Health Cannot Be Paved Simply With Good Intentions

The Ukraine war—and Russia's escalation of it—constitutes a brutal reminder that the international political context in which global health operates has fundamentally changed from what existed in the post-Cold War period. Balance-of-power and ideological competition constrict the political space in which global health operates, especially when the competition is violent.

Over the next decade, geopolitics will not always generate war, but non-violent alternatives are not necessarily more accommodating for global health. With Russia's struggles against Ukraine undermining its great power status, the relationship between China and the United States increases in geopolitical importance. Although not at war, these two countries are not talking directly about the greatest threats to global health—pandemics and climate change.

Countries and international organizations are only starting to navigate global health through the geopolitical dangers that our transformed world involves. Other policy domains, such as cyberspace, confront the same challenge, with experts proposing navigation strategies to produce meaningful collective action within the constraints set by geopolitics. This more political approach might yield more constructive outcomes for global health than continued appeals to multilateralism and global solidarity.