Go to homepage
During This Pandemic, It Is Us that Our Children Need Protection From
Governance

During This Pandemic, It Is Us that Our Children Need Protection From

Looking at resilience and mental health across Singaporeans during the pandemic 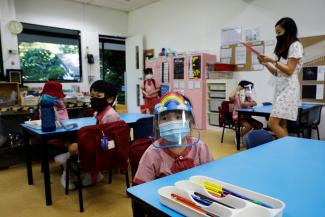 The COVID-19 pandemic has brought about a marked increase in the number of child abuse cases around the world, which is a public health threat to the younger generation.  Many parents seem to struggle from a vicious cycle when relating to their young children during hard times: those who suffered abuse when they were young now face difficulties and dilemmas when dealing with their own children. Governments and NGOs need to tackle this issue and strengthen the mental resilience of our society.

A recent study of the current mental health status of Singaporeans exposed to the 1997 Asian financial crisis as children, found evidence that unreported child abuse cases had lasting mental health implications, such as depression and post-traumatic stress disorder. Public policies need to be implemented to safeguard at-risk children and support at-risk parents. Although the presence of government relief payments has cushioned some of the financial stresses of the COVID-19 crisis on families, more attention must be given to the deterioration of children's mental health and parent-child relationships. Specially designed social cushioning policies should be introduced and amplified at schools and community spaces to reduce the risk factors associated with child abuse and provide more support to families.

In interviews with people in Singapore who had grown up during the Asian financial crisis, we encountered several unpleasant accounts of child abuse during the Asian financial crisis. A Singaporean woman, who is now in her mid-30s, recounted her father, who was hitherto "responsible, inspiring, and super fun to be with," hitting herself and her sister during that period. He was under financial stress and did not seek help from anyone. Their mother, being a loyal wife, reprimanded the girls for provoking their father and ordered them to "never speak about it again." The interviewee felt alone and afraid. She did not have the courage to seek help from her teachers. On the weekdays, she stayed at her school's canteen until 7 o'clock in the evening every single day. This carried on until she was in secondary school, where she found a job as a tutor and began to support herself. Despite her efforts to move on, the events since 1997 have left her lasting trauma.

Yet, these interviews reveal that schools must indeed do more right now for this generation of children. Although domestic violence is a perennial threat, solving it is has never been more urgent. Mental health disorders affect our children now more than ever before. A recent article has termed this generation of children as "Generation COVID," or "Gen C." Even before the pandemic struck, the suicide rate in Singapore jumped 10 percent in 2018. In terms of children suicides, it may be caused partly by an increase in social media exposure that leads to more stress, as well as increased expectations placed upon children by parents.  In 2019, there were more cases of students from the top schools in Singapore being referred for treatment at the Institute of Mental Health than ever before. Worse, adults' mental health has also been adversely affected during the pandemic. In a recent survey conducted in six Asian economies by City University of Hong Kong, adults said they had experienced an increase in their irritability and anger, with the highest rates in Hong Kong and South Korea.

Governments and NGOs around the world must act. For example, on 24 February 2021, the Ministry of Social and Family Development in Singapore announced the launch of its first integrated phone line for reporting domestic violence, known as the National Anti-Violence Hotline. This came in response to a 40 percent increase in the numbers of reported domestic violence cases between January and October 2020. Big Love Child Protection Specialist Centre in Singapore described one such startling account from a child: "I talked back to my mum, and my dad got furious. He dashed out of the room, grabbed a steam iron, and hit my back with it."

There are several feasible upstream interventions, both promotive and preventive, that should be introduced urgently. First, schools should implement peer-to-peer programs that empower children to promote their own well-being. Selected children can be trained in as active listening and trauma-informed care. Generally, having children learn to support each other and be more sensitive to feelings has a positive effect on building a safe school climate. And those who experience domestic violence will also be more willing to speak about their experience at home with a trained peer or a trusted adult, which will allow them to get appropriate help.

Second, at-risk parents should not be left to their own devices. Mental health disorders hit low-income families with greater frequency and intensity, so as long as the pandemic is ongoing, these parents should be offered additional and fully-subsidized parenting support. This could include providing mental health group therapy sessions in after-work hours and After School Engagements programs for their children.

The lifelong mental health implications of the pandemic on children who experience abuse during this period can be severe. Thus, as part of public health promotion efforts, more attention needs to be placed on assuring them that they can share their family troubles with trusted adults at school. Parents, on the other hand, should not be regarded as "the enemy" but viewed as people who deserve additional resources too, to achieve the difficult task of parenting Generation COVID even while they are trying to survive the financial effects of COVID-19. Within the Asian context, where family values are sacrosanct, and children are placed under constant pressure to perform, governments need to take action to ease the burden on both parents and children and boost family well-being through promotive and preventive measures. If we did so, then perhaps, the painful process of recounting our experiences from the Asian financial crisis would not be wasted.

Gwendolyn Thong is a master of public policy graduate from the Lee Kuan Yew School of Public Policy at the National University of Singapore. She is a founder of the Chatty Caterpillar, a mental health education company, in Singapore.


Alfred M. Wu is an associate professor and assistant dean in Lee Kuan Yew School of Public Policy at the National University of Singapore. He is a development studies expert with publications in the fields of public finance, education, social protection, urban development and local governance in China and East Asia.