Don't be Seduced: Two Shots Are Better Than One
Governance

Don't be Seduced: Two Shots Are Better Than One

The current U.S. COVID-19 vaccine administration schedule is evidence-based and the right one 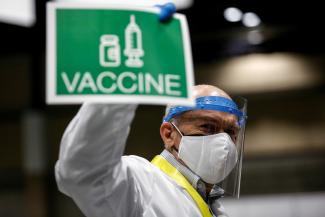 A doctor holds up a sign to signal his station needs more vaccine doses at a COVID-19 vaccination site at Lumen Field Event Center in Seattle, Washington on March 13, 2021. REUTERS/Lindsey Wasson
by Céline Gounder and John P. Moore and Luciana Borio March 18, 2021

The United States is administering the two-dose Pfizer and Moderna COVID-19 vaccines on a different schedule than many other countries, including the United Kingdom, Germany, and Canada. Here in the United States, most people are receiving their second dose on schedule, three or four weeks after their first dose of the Pfizer and Moderna vaccines, respectively. Many other countries are delaying the second doses. Why is that? Are we doing the right thing, or do we have something to learn from others abroad?

Here, we explain why the United States has been getting it right all along and why shifting gears now would be a mistake.

‘Shifting gears now would be a mistake’

The Pfizer and Moderna mRNA vaccines were designed to be administered in two doses a few weeks apart: a prime and a boost. It was a pleasant surprise to learn from the clinical trials that the first dose affords meaningful protection against COVID-19, at least in the short-term. Based on these data, many countries are delaying the second dose in order to spread the limited supply to as many people as possible (which is, in fact, the strategy adopted by the United Kingdom). It's easy to be seduced into thinking we should do the same, and some American public health experts have urged us to follow suit.

If you had just two doses, the thinking goes, would you give both to just one of your parents — or would you give one dose to each of them? The simplicity of this anecdote obscures very real risks to individuals and the wider American public.

First, the FDA-authorized strategy of administering two doses of the Pfizer and Moderna vaccines at three- and four-week intervals, respectively, is indisputably more protective. than a single doses. That's because the second dose of these mRNA vaccines dramatically boosts both the levels of virus-neutralizing antibodies in our blood and our T-cell responses, the arm of the immune system that predicts more durable immunity. Real world evidence out of Israel and the United Kingdom shows that the risks of hospitalization and death are much lower after two doses of the Pfizer mRNA vaccine. The Biden-Harris administration has pledged to follow the science, and in this case, it's clear.

Furthermore, delaying second doses at this point would be solving the wrong problem. With the FDA's emergency use authorization of the Johnson and Johnson vaccine, and Merck's support to scale up its manufacture, the supply of COVID-19 vaccines will increase dramatically over the next two months. The Biden-Harris administration predicts that we'll have enough supply to vaccinate the entire American population by the end of May. The bottleneck is rapidly becoming the speed of vaccine distribution, not the number of doses available.

‘The bottleneck is rapidly becoming the speed of vaccine distribution, not the number of doses available’

A change in policy now could confuse the public at a time when the new administration is trying to improve the public's trust in all vaccines. Many might wonder why it's even necessary to get a second dose, particularly now that the one-dose Johnson and Johnson vaccine is being rolled out. Others might be resentful of public health authorities for only partially protecting them against the virus. A change in policy could also wreak havoc on vaccine administration systems, just as sites are hitting their stride.

But one of the most important reasons to stick to the science is that we don't know how a change in the vaccine dosage schedule could affect the spread of the new mutant variants of the virus that have emerged in recent months.

Variants can arise for different reasons, but one troubling source is when the virus replicates in the presence of relatively low levels of neutralizing antibodies. In that setting, it adapts to survive, yielding new variants that may better evade the immunity induced by current vaccines as well as the immunity induced by natural infection with earlier strains of the virus. Some variants are more transmissible, meaning they spread more easily from person to person. And some are also be more virulent, causing more severe disease.

All of this has implications for the vaccine schedule. At least two laboratory studies found that the B.1.351 and P.1 variants that were first detected in South Africa and Brazil, respectively, evade antibodies induced by a single dose of the Pfizer and Moderna vaccines, whereas the higher antibody levels present after two doses are much more likely to remain protective. In the short-term, if we delay second doses of these vaccines, we could be creating a window of time when our vaccine-primed immune systems protect us against the original, or ancestral strain, but not against some of the new variants. At a population level, there is also a risk of selecting for new variants, creating a much bigger long-term problem.

If a dose-delaying strategy did select for variants, to contain the epidemic would we have to boost our immune responses with yet another third dose of vaccine? Or would the setback mean we would have to wait for a second generation of vaccines being developed by Pfizer and Moderna before we can curb the virus and reclaim our freedom? No one knows, which is why we should not be taking these unnecessary risks.

When faced with difficult decisions such as how to best allocate the national vaccine stockpile, deviating from the scientific evidence rarely ends well. The Biden-Harris administration has pledged to follow the science, and in this case, the science is clear. The present COVID-19 vaccine administration schedule is evidence-based and, we assert, the right one.

Drs. Gounder and Borio were members of President Biden's advisory board on COVID-19, which counseled him during the presidential transition period on how to respond to the pandemic.

Céline Gounder is an internist, infectious disease specialist, and epidemiologist at the NYU Grossman School of Medicine and Bellevue Hospital in New York City.


John P. Moore is a professor of microbiology and immunology at Weill Cornell Medicine in New York City.


Luciana Borio is an infectious disease specialist and vice-president at In-Q-Tel and senior fellow for global health at the Council on Foreign Relations (CFR).

Hit Me With Your Best Shot

The best shot is the one in your arm

Taking on the Biology of the Virus Itself

We need an Apollo project for pandemic preparedness

During This Pandemic, It Is Us that Our Children Need Protection From

Looking at resilience and mental health across Singaporeans during the pandemic

by Jennifer A. Hillman, Alex Tippett