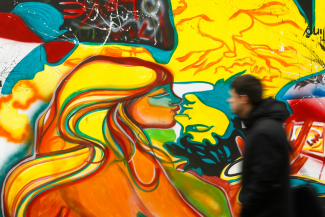 Forty years ago this month, the first cases of HIV/AIDS were reported in the United States. While HIV no longer instills panic, there is still a long way to go in the fight against this epidemic. A powerful step forward would be to destigmatize and decriminalize HIV.

In 2019, 37 million people were living with the disease, over 860,000 people died from it, and the number of new infections has increased in 127 countries since 2010, according to estimates by Institute for Health Metrics and Evaluation researchers.

International health leaders need to put pressure on countries that are imposing legal regulations and HIV criminalization laws on those at risk. HIV, like many diseases, is embedded in the fault lines of structural discrimination, inequity, and “othering.”

This cannot be ignored. Excluding sub-Saharan Africa, 75 percent of new infections are among men who have sex with men, people who are in prison, those who are transgender, sex workers, and people who inject drugs—and the partners of these individuals. Within sub-Saharan Africa, HIV is widespread among the general population including high-risk groups who carry a disproportionate burden. Adolescent girls and women are also particularly vulnerable.

Acknowledging those at risk is critical to reaching high-risk groups. We cannot design policy or programs for people we fail to recognize. And we can’t expect people to participate in HIV prevention programs when we do not accept them as equals.

During the 1980s, HIV activists across the world fought for visibility—for the disease and for people who had it. Interactions between activists and regulators were innovative at the time and proved essential to HIV awareness. In the United States, where a global AIDS activism movement began to emerge, names such as those of activists Peter Staley and Larry Kramer became synonymous with the HIV awareness battle. Organizations, including the Treatment Action Campaign in South Africa, were built on principles of empowerment. The public health community credits Anthony Fauci—a household name today due to his steadfast public health communications during the COVID pandemic—with championing the work of HIV/AIDS activists as well as the development and testing of antiretroviral medicines for HIV.

But in many regions and countries, communities are not involved or empowered when it comes to HIV activism, education, and treatment. Discriminatory laws keep people from speaking up. In dozens of countries, same-sex relationships and sexual acts can result in fines, imprisonment (up to a lifetime), and in some cases, the death penalty. These problems exist in countries of all income levels. In the United States, for instance, several states have “License to Discriminate” laws. These laws may allow establishments and even medical providers to refuse services to lesbian, gay, bisexual, transgender, and intersex people.

The criminalization of drug use is also associated with HIV because increased needle and equipment sharing are the primary means of HIV infection spread among people who inject drugs.

In addition, there are laws specifically linked to HIV status. For example, in some countries, actions that put others at risk of HIV exposure can carry severe legal consequences. The Global HIV Criminalization Database tracks these laws, identifying cases that target people with HIV. If there is fear of legal recourse for being HIV positive, we cannot expect successful testing, treatment, and other HIV prevention efforts to reach their full potential.

UNAIDS advocates for a human rights-based approach to ending HIV/AIDS. In the past, UNAIDS has condemned harmful legislation, such as the Uganda’s Sexual Offences Bill. But beyond speaking out, an individual has a limited ability to act. Recently, UNAIDS appointed an ‘ambassador,’ whose intention is to work with world leaders to combat stigmatization of lesbian, gay, bisexual, transgender and intersex people. This does not go far enough, though, or reach all of the populations driving sustained or increased new HIV infection rates.

In his 1983 essay, Larry Kramer famously stated, “Every gay man who is unable to come forward now and fight to save his own life is truly helping to kill the rest of us… unless we can generate, visibly, numbers, masses, we are going to die.” But the onus cannot always be on the affected group. Leaders need to step up.

The next chapter of the HIV epidemic will see infection rates and deaths continue to rise and fall, medical successes and failures, issues surrounding equity, discrimination, and stigma. The development and roll-out of the COVID-19 vaccine demonstrated the unprecedented speed at which scientists, public health officials, and government can move to address a global health problem. HIV scientists are increasingly on the right track for a vaccine, and could even leverage COVID-19 vaccine infrastructure. At the same time, modern strategies will need to go beyond science. Addressing HIV will require pressuring governments to face social and political discomfort necessary to ensure that those most at risk for HIV have the best access to tools that prevent it.

A human rights approach to ending HIV/AIDS would address existing challenges head on, and would lead more quickly to the development of a vaccine. But if at-risk individuals are pushed into hiding, afraid to seek care due to stigma, discrimination, and arrest, we have a boiling pot and it will have serious consequences.

EDITOR'S NOTE: The author is employed by the University of Washington's Institute for Health Metrics and Evaluation (IHME), which leads the Global Burden of Disease study described in this article. IHME collaborates with the Council on Foreign Relations on Think Global Health. All statements and views expressed in this article are solely those of the individual author and are not necessarily shared by their institution.

Creating surgical and anesthesia capacity is a win for pandemic preparedness