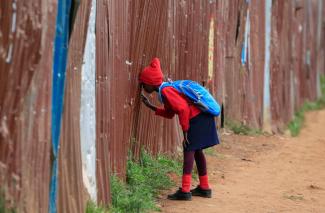 A girl peers through the fence of her school in Nairobi, Kenya after the 2021 school year was delayed due to COVID-19 REUTERS/Thomas Mukoya
by Joseph Friedman, Luisa S. Flor, Emmanuela Gakidou March 8, 2022

Great progress has been made in recent decades in the movement toward global gender equity. Girls have caught up to boys in rates of schooling in most of the world. Women's participation in the labor force has risen substantially. Societies have generally become more equitable for women and girls, and nearly everywhere they are living longer, healthier, and more productive lives than ever before. But new data indicate that COVID-19 is threatening this progress.

In our recent analysis, published last week in The Lancet, we chart how the pandemic has affected social and economic conditions—such as employment, schooling, and safety—differently for men and women around the world.

One of the most concerning findings of our study was that women and girls were 11 percent more likely to drop out of school during the COVID-19 pandemic compared to men and boys.

In recent years, globally and in most of the world's major regions, girls have on average overtaken boys in educational attainment. But reversals of this trend—where girls disproportionately drop out of schooling for economic or social reasons—have been noted during previous crises, such as Ebola outbreaks.

Important context is that child marriage is still shockingly common, affecting one in four girls in Latin America, and one in three girls in sub-Saharan Africa. During crises—in the face of greater economic instability—families may choose early marriage for their daughters. They do so in the hope of assuring her immediate economic security, but it may come at the cost of her long-term education, career, and health.

This is especially concerning because education is an important avenue for social mobility and economic advancement. Girls dropping out of school during COVID-19 will also limit their ability to contribute to society as adults, harming future economic growth for decades to come.

It is critically important to prevent school dropout because once individuals leave school, they're often unlikely to return. Education, as a social good, is largely fixed at a young age, with limited opportunities for catching up later in life. Urgent policies are therefore needed to guarantee that girls stay in school–and return to schools as they re-open—even during economic and health crisis. Such policies need to be realistic about economic conditions, providing the material resources that families need to support their daughters' education. In our study, we found that only about 50 percent of remote learners were reported to have adequate online learning resources at home. This means that a huge proportion of the world's learners has not been able to effectively continue their education during school closures over the past two years.

As schools reopen, gender-equity-focused measures can maximize girls' chances of returning, including economic incentives, safe bathrooms, and other facilities, and effective communication about the benefits with families and communities.

We also found that women have been disproportionately affected by the pandemic across many economic aspects of life. Although labor force rates among women have risen substantially, they remained lower than those of men in nearly every country, even before COVID-19. During the pandemic, women were significantly more likely to lose their employment relative to men.

At the global level, 35 percent of women, and 32 percent of men reported employment loss in March 2020, at the start of the pandemic. This fell to 26 percent and 20 percent respectively by September 2021, a strikingly high number that shows the persistent long-term effects of COVID-19, and their gendered impact.

In part, this stems from the fact that women tend to be employed in more vulnerable sectors—such as hospitality, domestic work, and education—that were harder hit by the pandemic. Cultural attitudes around unpaid work at home are also playing an important role. We found that globally—and in every major world region—women were significantly more likely to report forgoing paid employment in order to care for others. Especially concerning, these gaps widened over the course of the pandemic. By September 2021, women were 2.4 times more likely than men to report losing paid work for this reason, compared to 1.8 times more likely in March of 2020. Women were also more likely than men to report increases in chores and domestic tasks related to the pandemic.

These results indicate that attitudes about gender pertaining to career paths and unpaid work at home continue to shape women's economic possibilities, in virtually all countries. Tackling entrenched social stereotypes and gender norms is critical, although it takes time to foster change across generations.

Policies to promote economic gender equality can be implemented much more rapidly, as well. These include investments in universal services to replace much of the manual labor that is disproportionately been executed by women in lower-income countries, including fetching water and fuel for fires. In all contexts, policies such as guaranteed equal parental leave, and mandated family-friendly working conditions, are also critical. Unpaid work, such as household chores and unpaid care duties, also must be measured and centered in political discussions of gender equity.

Although women have been generally less likely than men to die from COVID-19 directly, they have been disproportionately affected by a number of health and safety concerns during the pandemic, especially those related to gender-based violence.

Alarmingly, we found that 54 percent of women and 44 percent of men reported that gender-based violence had increased in their community during COVID-19. This is especially troubling because rates of violence against women have remained perniciously high in recent decades, showing little improvement over time, despite many efforts this area. Although gender-based violence has always been very difficult to study accurately, given stigma and fear, recent estimates suggest that before COVID-19 up to 30 percent of young women had experienced intimate partner violence in their lifetimes.

Stay-at-home orders during pandemic-related lockdowns meant that many women and girls had fewer options to stay safe from abusive intimate partners or family members. Women were also more likely than men to report disruptions to health care overall in most world regions. This, alongside disruptions to in-person schooling, limited access to assistance through societal institutions. Increases in gender-based violence have also been reported in previous health crises.

Interventions to prevent gender-based violence must shape cultural practices and gender norms, and are especially effective when they provide training to boys. A host of other measures can also be implemented more quickly, including access to safe facilities, and clear laws that uphold the safety of women and girls.

A clearer global picture of how gender equity has been affected by COVID-19 has started to take shape as more data has become available, but overall it is still very sparse.

For many critical social and economic outcomes—such as schooling—only one or two data sources exist that provide information on shifts that occurred during the pandemic. Many other sources are available but are not broken down by gender. Existing data sources also have important limitations. Even when gender-specific information is available, it is still mostly constrained to reporting on women and men only, excluding gender minorities. Moreover, because the pandemic has disrupted typical data collection mechanisms, including surveys and censuses, many have moved online. This has opened new horizons in terms of speed and ease of data collection, but also means that only individuals with smartphones can participate.

Outcomes that are more common among those with incomes too low to own a smartphone may therefore be underrepresented in the world's only current data on many critical issues. It also means that we may be drastically underestimating the critical role that poverty has played in social and economic situations during COVID-19.

As pandemic restrictions are lifted, it is essential that routine, comprehensive data collection is resumed. Particular care should be paid to the issues known to have been exacerbated during the pandemic. And prioritizing the inclusion of gender information in all data sources, for both adults and children, is imperative.

As the world reopens, a host of social and economic policies are being implemented to address the negative impacts of the past two years. It is essential that gender equity is central to new efforts in order to ensure that the many decades of previous progress toward achieving gender equity in the world are not reversed. It is also paramount that these policies center social inequalities broadly, because gender gaps are often most acute among women living in poverty. Throughout each of the areas highlighted above, more vulnerable women—including women with lower incomes, less education, and who belong to a minority ethnic group—were at substantially higher risk.

The importance of gender depends greatly on the particular cultural and economic context of each country, as well as the other diverse factors that determine each woman's set of opportunities. The global community must therefore do everything in its power to promote gender equity in all policies, taking the nuance of cultural context and other social inequalities into account.

EDITOR'S NOTE: The authors are employed by the University of Washington's Institute for Health Metrics and Evaluation (IHME), which leads the study described in this article. IHME collaborates with the Council on Foreign Relations on Think Global Health. All statements and views expressed in this article are solely those of the individual authors and are not necessarily shared by their institution.

Joseph Friedman is an MD/PhD student at the Center for Social Medicine and Humanities at UCLA.


Luisa S. Flor is a postdoctoral scholar on the Gender Equality Metrics team at the University of Washington's Institute for Health Metrics and Evaluation (IHME).