Universal health coverage is achievable for all countries—and in the aftermath of the pandemic, it should be implemented 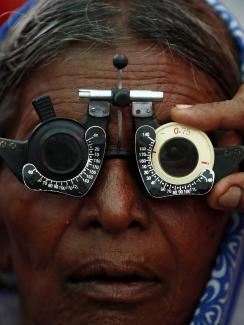 A woman gets her eyes tested at a free eye-care camp on the occasion of Indian politician Babasaheb Ambedkar's death anniversary in Mumbai, India, December 6, 2019. REUTERS/Francis Mascarenhas
by Anthony McDonnell June 11, 2020

In late 2013 Emile Ouamouno, a two-year old boy in Guinea, had some kind of physical contact with a fruit bat's guano. On the December 2 that year, he showed the first symptoms of a strange illness, became sicker and sicker, and tragically died four days later. This illness spread to Emile’s grandmother, who passed it on to two local health care workers, both of whom then took it back to different villages.

As time went on, more and more people became sick with this mysterious disease. Its severity notwithstanding, health care was so poor in this rural area that it took almost four months and seventy-nine deaths before the illness was identified as Ebola. By the time the authorities realized the scale of the problem, the virus had spread to communities in three countries, and it was incredibly difficult to contain. The region—and potentially the world—was put at risk by the abject failure of primary health care in small villages in rural West Africa.

The exact origins of COVID-19 remain unclear. For a long time the accepted story has been that the coronavirus that causes it first spread from an animal to a human at a seafood market in the Chinese city of Wuhan. However, recent evidence suggests it might have started much earlier.

It is not yet clear how early on the disease came to the attention of the authorities, but it appears that local instincts to censor rather than investigate the health problem slowed down the response. This much more infectious (but thankfully far less deadly) virus also managed to escape early efforts at containment and has reached almost every corner of the planet.

These stories illustrate the importance of good and proactive health care in preventing new infections from spreading. We all have a stake in making sure that every health system in the world is strong enough to spot new infections, and contain them. We also need to invest in health, so that countries have a greater capacity to respond in emergencies.

Money is far from the only driver of quality care

Poverty has not been the driver of how able systems are to cope with the pandemic. Rather, it’s the quality of a health care system that matters. While money is correlated with good health coverage, it is far from the only driver of quality care. Many middle-income countries offer excellent health care to their citizenry, and there are low-income countries making real strides in that direction as well. Meanwhile, the world’s largest economy lacks universal health coverage, and is struggling to deal with this pandemic.

At the Overseas Development Institute (ODI), we recently finished an analysis looking at why and how forty-nine countries moved toward universal health coverage, comparing early adopters like the United Kingdom to more recent adopters like Thailand and Rwanda, as well as countries working to reach universality now.

What we discovered is, first of all, a country’s wealth matters far less than its politics when deciding to invest in universal health care. Good health care is not cheap, and opponents of expanding health coverage are not slow to point this out. However, when countries want to do it, they find the money. In our research, we found that countries where resource constraints were widely touted as a barrier to universal health coverage were only slightly (13 percent) less wealthy than those where this was not considered a major barrier. Indeed, several of the places that have acted quickly to successfully contain COVID-19, such as South Korea and Taiwan, are significantly less wealthy than countries in Europe and North America who struggled.

Contrary to what we had expected, most countries that moved toward universal health coverage have done so in the wake of major disruption, when they are often poorer than normal. The United Kingdom, France, and Japan implemented universal care during their recoveries from World War II, Rwanda after genocide, Mexico as democratization took place.

In fact, fully 70 percent of the countries that moved toward universal health coverage did so shortly after episodes of state fragility. During normal times, the voices that say, "health care is too expensive," appear to block major change. However, what follows times of crisis are times of reconstruction—and often a period of reflection. In these periods, the status quo is never tenable, opposition voices are weaker, and grand moves toward improving welfare, including steps toward universal health coverage, take place more easily. Given that COVID-19 is explicitly a health crisis, it seems particularly likely that it will prompt a rethink of what adequate health care looks like.

For good reason, the world is currently focused on slowing the spread of COVID-19 and getting the much-needed supplies in place to deal with it.

This is the biggest crisis the world has collectively faced in at least seventy-five years, and it deserves our attention.

However, when it is behind us, countries will once again need to reconstruct. During this time, we need to emphasize that universal health coverage is tenable for all countries and highlight the problems poor care has created—both in stopping us from containing this deadly disease and in overwhelming the health care systems across the world once we couldn’t.

Anthony McDonnell is a research associate at the Overseas Development Institute and a senior policy analyst at the Center for Global Development.