How did Taiwan do it? 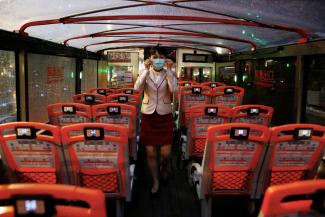 A tour guide adjust her face mask in an empty Taipei Sightseeing bus in Taipei, Taiwan on May 22, 2020. REUTERS/Ann Wang
by Ray Yip March 3, 2021

As the pandemic enters its second year continuing to take an unimaginable toll on lives, livelihoods, and the global economy, there are only a few countries that stand out for their effectiveness in controlling the epidemic. Atop that short list is Taiwan.

As of this month, Taiwan — with a population of nearly 24 million people — by the end of February 2021, a total of 955 COVID-19 cases and nine deaths were documented. At that rate, the United States would have had 12,600 cases and 123 deaths; in actuality, it's recorded over 24 million cases and half a million deaths.

Taiwan's most impressive achievement was limiting local transmission to just 66 cases (the other 858 cases were imported). For 250 days from April to December 2020, Taiwan had no local transmission at all. They did it by effectively managing imported cases, which is the key of any successful infectious disease control effort: control the source. And they did it without lockdowns or movement restriction: since the outset of the pandemic, school, business, and restaurants have remained open.

So, what factors contributed to this success?

I was trained as an epidemiologist, started up the U.S. Centers for Disease Control and Prevention (CDC) in Beijing before the 2003 SARS epidemic, and lived there for two decades. Now retired, I was by chance in Taiwan at the beginning of 2020 as the virus began to spread. What I saw confirmed the basic public health principles and practices a country needed to embrace to beat back a pandemic — but few countries proved able to achieve it.

On January 1 2020, my wife and I flew to Taiwan for vacation, with the intention of returning to our home in Beijing a few weeks later. But as our scheduled departure approached, local media began issuing serious reports about a SARS-like outbreak in Wuhan, China. We went to Beijing on January 16, but four days later everything changed when China declared a national emergency for the novel coronavirus outbreak. Expecting the unpleasant life under prolonged lockdown, we returned to Taiwan on February 2, just before the country closed its border with China to non-citizens. I had a front roll seat in observing Taiwan's response when things were heating up throughout February.

Taiwan's experience and response measures are worth examining, in part, because many argue that China's successful albeit heavy-handed approach would not be acceptable in most countries. But Taiwan as a liberal democracy, was able to adopt effective measures with strictness only targeting those at risk of transmitting the virus to others.

Lessons learned from the SARS epidemic no doubt helped Taiwan properly prepare for the COVID-19 pandemic, just as they did in China, Hong Kong, Vietnam, and Singapore. Sadly, China repeated a fateful mistake of SARS: local officials in Wuhan were slow to alert the central government about the outbreak.  When reports surfaced on social media at end of December, 2019, Taiwan dispatched two of its own epidemiologists to Wuhan to gather intelligence and acted on it immediately. Taiwan started screening air passengers arriving from Wuhan on December 31, 2019 – the earliest public health measure taken anywhere —and on January 2, 2020, Taiwan CDC activated a response team to monitor and to respond the SARS-like pneumonia in Wuhan. In short, the country was taking the outbreak seriously about 14 days before China did.

Stand Up the Central Coordinating Mechanism for Epidemic Control

Like fighting a war, countries must have a strong command-and-control mechanism to battle the outbreak. Taiwan activated its Central Epidemic Command Center (CECC) on January 20, 2020, which integrated government resources with those of academia, the medical system, and the private sector — all unified in the fight against COVID-19.

Dr. Shih-Chung Chen, the Minister of Health and Welfare, led an all government effort that included the ministries of interior, transportation, foreign affairs, economics, labor, education, and environment, as well as private stakeholders.

From the outset, CECC demonstrated its ability to coordinate across agencies and mobilize all sectors for the tracking and isolation of every COVID-19 cases and their contacts. The way they enlisted cell phone providers to help set up electronic fencing to monitor compliance with home quarantine was a good example of enlisting the private sector in the response.

Each afternoon beginning in January, Minister Chen hosted a press conference on the status of epidemic and addressed issues of concern. I was most impressed that detailed background information about each and every newly diagnosed COVID-19 case was provided, as well as posted on the Taiwan CDC website. Anyone who breached quarantine was also identified, along with the fines they were subject to. This name-and-shame routine highlighted that this was a serious business. The briefing was shifted to a weekly format in June of 2020, and nowadays, the progress of vaccine procurement has become a major part of the communications effort.

In the exemplary case of a taxi driver came down with COVID-19 in February, it took several days mapping his movements with his cell phone data to track down the passenger he picked up at the airport, who came in from Wuhan.

By keeping the case load very low, Taiwan was able to assure proper forward and backward contact tracing. And a 14-day home isolation for people who had close contact with a COVID-19 case was the surest way to break the chain of transmission. Unfortunately, only a few countries proved able to do all this in an air-tight fashion.

For those found to have had close contact with a COVID-19 case as well as Taiwanese residents initially returning from China (and later from all countries), the country mandated a 14-day home quarantine. To support those isolating at home, community volunteers provided shopping service and filled other needs. And to ensure people adhered, the country worked with cellular providers to create a cell phone based electronic fence. If a quarantined person's phone left the defined home parameter, local public health authorities and police were automatically alerted. And to prevent people from venturing out without their cell phone, local police made unannounced home visit once or twice a day. Those found violating the quarantine requirement were subject to hefty fines, and were identified during the CECC's TV briefing. With the exception of China, few counties were able to achieve such a high level of compliance with home-based quarantine measures.

Passengers arriving from Wuhan were screened beginning on December 31, 2019, even before the Chinese government or the WHO recognized they had a SARS-like outbreak there. On January 20, 2020 the requirement was extended to all passenger arriving from China. Airport-based measures include temperature checks, a written survey of symptoms, and a test of the given cell phone number to make sure it was functional.

On January 25, all tour groups from China were suspended. By February 6, Taiwan closed its border with China to all non-citizens. And on May 17, all foreigners were barred from entering Taiwan, and returning Taiwanese citizens had to undertake a 14-day home-quarantine.

For me, the most impressive aspect of Taiwan's epidemic control effort was the fact that all diagnosed cases were traced backward to find out from whom they got the virus, and traced forward to close contacts who needed to be isolated at home. As of now, only 66 cases in Taiwan were due to local transmission, and all but 10 of them were traced to their source of transmission.

Taiwan also used cell phone data to track, retrospectively, the locations those diagnosed with COVID-19 had visited, which proved instrumental for tracing close contacts. This resulted in the closure of specific bars and restaurants that had been visited by an index case. One notable exception was that they closed all night clubs in April after one confirmed case failed to reveal she worked at one of them.

Taiwan has a national health insurance system which captures all outpatient and inpatient encounters. Early on, the CECC arranged to link data on arriving air passengers with health insurance data, so when someone presented to a clinic with a cough or fever, the care provider was able to immediately determine if the person had recently arrived from Wuhan or China. Individuals flagged like this got extra attention, and were tested for the SARS-COV-2 virus.

Unlike the United States, there were little debate over the utility of face mask in Taiwan.  Proper masking clearly has a role in preventing the spread respiratory pathogens, and is a common practice during the winter in Japan and China, as well.

By early February when I arrived in Taiwan, more than 90 percent of the people were wearing masks in public. I couldn't find one for purchase, a shortage due to panic-buying. To prevent hoarding, Taiwan's government limited each person to purchasing 10 masks per week, and this further fueled the rush. Each morning all pharmacies opened to long lines, and allotted masks typically sold out within the first hour. This initial shortage of face masks may have actually added to the desire to wear them. The country also enacted an export ban of face masks in February. By April, when manufactures were able to scale up their production, there was no longer a shortage and the export ban was lifted.

Throughout this epidemic there were few objections and little debate over the public health measures. This was undoubtedly in part because Taiwan did not have to resort to any lockdown measures, a key point of contention in the United States and Europe. It was helped by to the transparent communication and detailed daily briefing held by Health Minister Chen. Public opinion indicated a high degree of trust for the government’s handling of the pandemic. I think there was a cultural element, too. In East Asian countries influenced by Confucianism, authorities and the elderly are held in high regard, which may have played a role.

As an epidemiologist with experience in SARS and HIV/AIDS control, I would not regard what Taiwan has done to keep the epidemic in check as extraordinary. In essence, they followed a textbook strategy based on basic principles of public health and epidemic control: respond early and quickly, prepare and follow a plan, communicate frequently and transparently to the public, find cases through testing and isolate cases and their close contacts to prevent further spread, and leverage data and technology. But during this pandemic, very few countries were able to perform these basic measures right and manage to keep the outbreak in check.

No doubt, leadership and an organized response were critical contributors, and I am sure they are not unique to Taiwan. But it does have its prior, painful experience with SARS in 2003, which was good preparation for this round. I sincerely hope that this pandemic will be a lesson for all other countries, albeit a painful one, and they will be better prepared for the next pandemic.

Ray Yip is a medical epidemiologist who worked at CDC for 23 years where he specialized in nutrition, maternal and child health, emergency response, and HIV/AIDS.