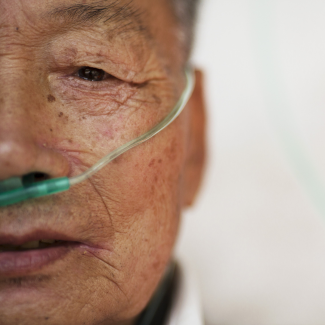 Hu Hushen, a former miner, breathes with the help of extra oxygen. Pictured at Yangjia Hospital in Zhejiang Province, China, on October 19, 2015. REUTERS/Damir Sagolj
by Yaming You May 12, 2022

Pneumoconiosis is one of the biggest industrial health hazards in China, accounting for 90 percent of all occupational diseases in the country. It primarily affects the health of migrant workers and has captured the attention of non-governmental organizations (NGOs) and policymakers. More recently, pneumoconiosis has become a priority for China’s national health agenda.

“No pneumoconiosis, breathe freely” is the vision for the future proclaimed on the official website of a Chinese non-governmental organization called Love Saves Pneumoconiosis (大爱清尘, LSP),  by far the largest and most influential nationwide non-profit organization dedicated to eliminating pneumoconiosis in China. In July 2019, ten Chinese administrations jointly announced the Plan to Prevent and Alleviate Pneumoconiosis. This marked the first time in the country's history that a joint action was taken by ten government departments in China to address an occupational disease.

Why and how did pneumoconiosis successfully receive such concerted and focused national attention? Answering this question can help understand why some diseases reach the top of a country’s policy agenda while others remain neglected.

Pneumoconiosis is a lung disease caused by breathing in certain kinds of dust particles—ones that are usually encountered in certain work environments—so it is also called an occupational lung disease. These types of dust include coal dust, asbestos, and silica. Pneumoconiosis may cause no symptoms, but in some people it may cause coughing and large amounts of phlegm, as well as shortness of breath. In its most severe form, patients may require long-term mechanical ventilation, and it can also lead to death.

Migrant Workers Are Most Vulnerable

Pneumoconiosis has been predominantly associated with a particular social group in the Chinese economy—migrant workers. Research has shown that 90 percent of people with pneumoconiosis are migrant workers—people who travel from their rural villages to cities to look for jobs, a result of China's rapid urban transition in its Reform and Open Era since the 1980s. Because of this, pneumoconiosis is linked to a social group who are believed to have sacrificed for China’s rapid economic growth. Such framing has successfully generated media attention and public sympathy.

Political and Legal Steps Against a Disease of Poverty

The framing of pneumoconiosis as a disease of poverty has also helped it gain recognition during the past few decades as the government introduced a series of policies on poverty alleviation (反贫困政策). Control and elimination of pneumoconiosis became a socioeconomic issue with political significance. Two premiers of China and leaders of China’s State Council, Zhu Rongji and Wen Jiabao, as well as the Minister of China’s Ministry of Coal Industry, Gao Yangwen, have advocated for attention to pneumoconiosis in the coal industry. Consistent support from powerful leaders led directly to the establishment of the China Coal Miner Pneumoconiosis Prevention and Treatment Foundation on October 31, 2003, registered under the Ministry of Civil Affairs with government support.

In 2001, the first Law on Occupational Diseases Prevention and Control was passed and has since been revised four times—in 2011, 2016, 2017, and 2018. The initial proclamation and subsequent revisions of the law, which writes occupational disease into national and local governance agendas, were critical and consistent steps for tackling pneumoconiosis. Legislation provided—and continues to provide—a crucial political window for civil organizations to effectively argue for more worker protection and legal compensations from employers. To that point, the creation of laws at the national level is one of the most powerful weapons for civil society fighting health-related battles against large coal companies.

So, pneumoconiosis in China has been addressed institutionally, politically, and legally since the beginning of the 21st century. But it's not enough—the disease still affects tens of thousands of people a year. Despite success capturing the attention of the public and policymakers, actual steps to address the problem have been slower to come.

During the first decade of the 21st century, many efforts by different NGOs have focused on seeking legal reforms to expand the right to compensation for health damages, but not much has been achieved on targeting prevention. Even today, diagnosing pneumoconiosis remains complicated and there is still no effective cure. Therefore, the most effective way to reduce prevalence and incidence of pneumoconiosis is to invest in primary prevention. Research has shown that dustproofing efforts can lead to not only reduction in the incidence of pneumoconiosis, but it also has large economic benefits because it reduces future productivity loss and medical costs. Workplace dust concentrations should be placed under stricter control and more advanced technology should be mandated, including ventilation, high-pressure spray systems with pneumatic power, and underground water purification systems.

Workers with minor symptoms of pneumoconiosis also need safer occupational opportunities so that their symptoms do not progress and they are able to continue working and earning. Big factories in more developed coastal areas usually require newly recruited workers to pass a health check. Workers who are diagnosed with pneumoconiosis during this health check often move on to find work in smaller factories, where no health check is required and where the working conditions are often poor. This traps them in a vicious cycle that can worsen their illness. Local governments could break this cycle by providing incentives to private enterprises with qualified protection equipment to hire these workers and assign them lung-safe work environments. Not only would this assist pneumoconiosis-stricken workers by maintaining stable incomes, but more importantly, it would help them readapt to society, reducing the psychological burden of not being able to support their family as well.

Family and educational support for the children of these workers is also critically important. Most NGOs dedicated to helping workers with pneumoconiosis focus on legal and collective actions related to workers' rights, but equally important is the suffering of the family members. Most of these sick workers choose to continue working after their diagnosis because they need to feed their families. To prevent workers from delaying treatment, family financial support is critical. Non-profit LSP is making efforts to set up financial aid for children from families suffering from pneumoconiosis. But more investment is needed. Sustained monitoring of the school admission rate of these families will also improve the efficacy of these projects.

Yaming You is a PhD student in history at Duke University pursuing the global health graduate certificate at Duke Global Health Institute. Her research focuses on medical history and history of public health in twentieth-century China and broader Asia.

China has successfully managed the pandemic, omicron could change that

Wildfires, Air Quality, and the Risk of Lung Diseases