Why a study set to deliberately infect people with coronavirus is unethical, unnecessary, and likely to be uninformative 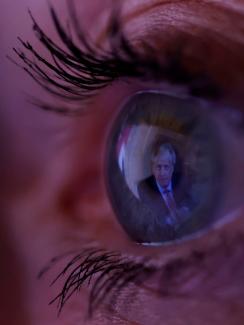 Britain's Prime Minister Boris Johnson is reflected in a woman's eye as she watches his address to the nation following the outbreak of coronavirus in Manchester, England, on September 22, 2020. REUTERS/Phil Noble
by William A. Haseltine October 27, 2020

The COVID vaccine challenge in the United Kingdom—where young, healthy individuals are deliberately infected with SARS-CoV-2—is no gutsy gambit or bold step forward as some have described it. It is instead an act of cowardice and desperation by a government that has failed miserably to contain the spread of COVID-19.

An act of cowardice and desperation

The human challenge study, announced last week in a press statement from Imperial College London, would recruit between thirty to fifty healthy volunteers age eighteen to thirty. Though the study design has yet to be finalized, the first phase of the trial will likely expose participants to increasingly large amounts of SARS-CoV-2 to determine how much of the virus it takes to cause them to develop COVID-19. In subsequent phases, the pharmaceutical services company overseeing the trial, Open Orphan, says that it's likely that several vaccines will be tested on volunteers and compared to a placebo. Volunteers who do become ill would be treated with antiviral drugs, like remdesivir, and potentially other drugs like dexamethasone.

The trial, which some have lauded as a moral imperative, is actually a moral mistake. It's both unethical and unnecessary, and it's likely to prove uninformative as well.

The Questionable Ethics of the Approach

There is no evidence that remdesivir, nor any other treatment currently available, can stop a person who is ill from dying. Interim results from the World Health Organization's (WHO) massive Solidarity Therapeutics Trial released earlier this month show that remdesivir and three other antiviral treatments have little impact on the course of the disease. Patients prescribed the drugs weren't any likelier to survive than those who weren't given access to the treatments, nor were their hospital stays any shorter. Dexamethasone may save a few people in late stages of the disease, but there is nothing to suggest that it can save everyone infected with the virus.

Groups recruiting volunteers for the study have been underselling the risk to potential participants, claiming that "the risks are low and the potential benefits huge." But we know in fact the opposite is true.

Underselling the risk to potential participants

The benefits in terms of knowledge gained may be inconsequential while the risk to volunteers is substantial. While young people infected with the virus may be more likely to avoid hospitalization than older adults, they often do become sick and symptomatic enough to be in bed for weeks and sometimes months. Follow-up exams have shown that many who recover are left with severe heart conditions, including inflammation and damage to the heart muscle itself. And death is an all-too-common outcome of COVID-19—even in the young.

Without a real understanding of the risk involved and with a significant financial draw for volunteers during a time of widespread unemployment—participants may receive up to £4000 or the equivalent of almost a two-month salary in the United Kingdom—it is hard not to see the trial and the push to knowingly infect healthy individuals as immoral.

It's hard not to see knowingly infect healthy individuals as immoral

This is especially true when one considers that the trial itself is entirely unnecessary. The number of new daily infections in the United Kingdom, in the United States, and in many other countries continues to rise sharply—the U.K. reached an all-time high of 26,000 new cases in a single day last week while the U.S. daily count peaked at 85,000 new infections. There is no need to deliberately infect the healthy in a laboratory setting when we are all at risk of infection out in the wild, where we live and work each day. The clinical vaccine trials currently underway take place in the real world, with volunteers who are exposed to infection through their routine daily behavior, as we each are exposed whenever we step outdoors.

One seriously doubts that a trial of thirty to fifty healthy individuals will tell us anything that the larger and more carefully conducted clinical trials won't. My guess is we will learn very little.

Challenge the Virus, Not the Volunteer

The move to human challenges has more to do with political expediency than scientific necessity. It isn't as if the world doesn't know how to stop this disease. One need look no further than the success of Australia, New Zealand, China, and Taiwan to see that basic public health measures—enforced mask-wearing, social distancing, and mandatory quarantine and isolation—could keep new infections and deaths close to zero.

British citizens have paid a high price during the pandemic in morbidity and mortality, which are among the highest per capita in Europe. Desperate times like these may call for desperate measures—but not pointless ones.

Desperate times call for desperate measures—but not pointless ones

When I was a child and Britain was just emerging from the Second World War, I can remember how it was perceived by the rest of the world. Britain stood out for its persistence, stoicism, perseverance and bravery. The country's reputation has now suffered because its government first proposed the murderous theory of herd immunity, and then, attempted to right its mistakes, relaxed its lockdown efforts far too soon. This challenge study is taking responsibility for his failures, Prime Minister Johnson is trying to accelerate the science with this Hail Mary pass in American football—a desperate if flashy fling that has little chance of success and only something you'd try when you've already lost. It will not solve the pandemic. It will only put more people at risk—deliberately and knowingly.

The U.K. vaccine challenge isn't the only one being considered. Belgium and the United States are both considering the same approach. But it is not too late to stop that from happening. The time is now to pressure our governments to take forceful action to keep all of us safe, not by treating us like human guinea pigs, but by implementing mandatory mask wearing and other public health measures no national leader in the United Kingdom or the United States have yet implemented.

Midsummer for the Season—But Not the Coronavirus

A case in poor leadership, the U.S. containment strategy has lacked clarity, consistency, credibility, and compassion