Midsummer for the Season—But Not the Coronavirus

A case in poor leadership, the U.S. containment strategy has lacked clarity, consistency, credibility, and compassion 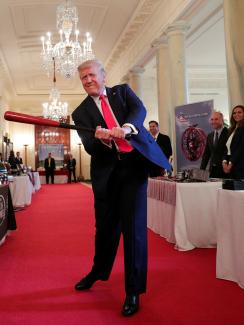 U.S. President Donald J. Trump swings a wooden baseball bat, celebrating a new jobs report, as he attends a "Spirit of America Showcase" event at the White House in Washington, DC, on July 2, 2020. REUTERS/Tom Brenner
by William A. Haseltine July 10, 2020

COVID-19 stormed through our cities and towns but stayed in some locales much longer than others. It came to Asia in January and all but vanished with the winter. In Europe it stormed through countries in early spring and withered away by summer. Here in America, it struck New York and Chicago with deadly force in March and April but faded away in May—only to surge across other parts of the country in its current, endless tidal wave across the American south, southwest and west.

More cases continue to wash across the globe, but why, in midsummer 2020, is COVID-19 still raging across the US when it was so quick to leave other parts of the world? The answer is clear: the coronavirus succeeds where we fail. And by any metric, the government of the United States has failed. The pandemic exploits our greatest weaknesses as a nation, but it can still be foiled by our strengths. Absent effective drugs or vaccines, we still have the knowledge needed to stop COVID-19 though some may doubt whether we have the will to implement the measures we know are needed. In East Asia, New Zealand, and Australia countries were able to confront the challenge by accepting the magnitude of the problem and employing the public health tactics necessary to contain the outbreak.

We failed to do the same because of weaknesses that, though profound, can be strengthened. Here I enumerate three: leadership, governance, and social solidarity.

In times of crisis, we first need leadership. Crises are chaotic by nature and we look to our leaders to guide us through the disarray. That guidance must be clear, credible, consistent, and compassionate. Clear, as crises often create confusion around real and imagined threats. Credible, as belief predicates action and requires trust. Consistent, as vacillation smacks of incompetence. Compassionate, as empathy is based on an understanding of our suffering. In Germany, a country with a leader who had previously been under fire over for her lack of strong leadership, Chancellor Angela Merkel took control early on in the crisis, defining the magnitude of the problem in a rare televised address and defining the steps that needed to be taken to avoid potential disaster. She rallied the support of leaders in all of the country’s states for a nationwide shutdown, which was based credible, science-backed approaches to pandemic.

Even though Germany’s measures were strict—during the lockdown any gathering of more than two people from different households was banned entirely—consistent messaging and Merkel’s credible and compassionate approach convinced the great majority to adhere to the restrictions voluntarily. The same cannot be said about the United States, where President Donald J. Trump displayed poor leadership and is now suffering the consequences. COVID-19 cases are still on the rise, and there are no nationwide mandatory guidelines for people to follow to this day.

In tandem with leadership, we also need good governance. A national crisis requires coordinated national action, and effective coordination depends on our ability to mobilize existing government agencies. They cannot be created on the spot. Responding agencies must be competent—each headed by an experienced leader, staffed by knowledgeable experts, and guided by the best knowledge available.

The U.S. Centers for Disease Control and Prevention (CDC) and the National Institute of Allergy and Infectious Diseases (NIAID), normally play leading roles in providing the scientifically-backed guidance that national and state agencies use as the backbone of their efforts to respond to infectious disease outbreaks. But with COVID-19, the CDC was quickly sidelined and the advice of experts at the NIAID was repeatedly undermined by the president, who arguably played an outsize role in shaping public health decisions about treatment options and approvals. Such a move created widespread disorganization and a lack of coordination on practically every element of our response, from testing to treatment and even the disbursement and availability of lifesaving medical equipment.

Compare our response to that of our neighbors to the north. In Canada, the prime minister stepped back to allow the minister of health and head of the Public Health Agency of Canada—the country’s chief public health officer—to step in to offer advice to the prime minister on necessary measures. Those measures were then implemented at the provincial level through local public health officials and political leaders.

Collective response is the sum of individual actions

Last but not least, we need social solidarity. Governments, no matter how competent, cannot manage a national disaster without their own citizens. Any collective response is the sum of individual actions. Some may argue that America, built on independence and personal freedom, is not suited to such solidarity. Yet, we have already proven that when faced with a real and deadly threat we are willing to forego some liberties to protect our nation. One need look no further than 9/11 for the proof.

Taken together, leadership, governance, and solidarity give us a framework for understanding the successes and failures—both partial and total—in coping with COVID-19. After some initial vacillation, the leaders of Asian countries, as well as those of Australia and New Zealand, were clear, consistent, and credible. Some were compassionate, others not. Jacinda Ardern, New Zealand’s prime minister, was successful in implementing one of the world’s strictest lockdowns, but her actions were not without failing. She declared the country virus free too soon, which led to a second spike in infections. But when confronted with the tangible results of her health system’s failings she readily admitted the error and resolved to never let the same mistake happen again.

The initial response of Western European leaders was slow—their early messaging, mixed. But as the magnitude of the disaster became apparent, each gave clear and consistent directives, warning of the danger and outlining a coherent response. They drew upon a reservoir of credibility and compassion. Sweden proved to be the exception. Rather than leading, the government abdicated responsibility and the country continues to pay a heavy price. The United States government is a case in point for poor leadership. Its containment strategy has lacked clarity, consistency, credibility, and compassion.

Right now, this seems to be a common failing for most leaders in the Americas. But in the United States, the wealthiest and most technologically advanced of all developed nations, this failing is particularly stark.

As COVID-19 causes simultaneous health and economic crises worldwide, it's an opportunity to evaluate health spending