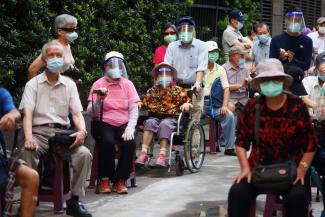 People line up to receive the vaccine against COVID-19 during a vaccination session for people over 85-years-old, at a church in Taipei, Taiwan, on June 15, 2021. REUTERS/Ann Wang
by Ted Alcorn May 27, 2022

The planet is graying. For the first time in history, there are more people aged sixty-five and over than children under five. Many of those elderly people live in cities, and their needs are leading to a reshaping of everything from tax policies to the design of transit systems to the organization of governments.

While cities around the world have released plans for meeting the needs of older people, few are as committed as Taipei, Taiwan. The city has been working within the World Health Organization's Age-Friendly Cities Framework since 2012 to address eight domains of urban life, and Mayor Ko Wen-Je has played a central role. He also has a rare background among mayors: he is a physician. Mayor Ko spoke with Think Global Health about what Taipei’s growing elderly population means for its governance.

Think Global Health: How did your training in medicine influence your approach to governing?

Ko Wen-Je: I've been a surgeon for over thirty years and the unique thing about surgeons is that we see a problem and we fix it. That is the biggest trait of people like us.

For example, in Taipei, there are a lot of older apartment buildings that have four to five floors, but they do not have an elevator and if there are people living there who are in wheelchairs, unless they live on the first floor, they won't be able to see doctors when necessary. So that's why we have doctors visiting them at home, to give them any kind of medical service they need. That's how we developed home visits by doctors and then also doctors seeing patients remotely. So, the first thing we ask is: Is this a problem? If it is, we list out the problems and we treat them one by one.

Think Global Health: How did you identify that problem?

Think Global Health: In many wealthy countries, Taiwan foremost among them, the distribution of the population is shifting and becoming more elderly. Is that perceptible to you?

Ko Wen-Je: In 2014 when I first became the mayor, only 14 percent of the population was over age sixty-five, but by January 2022—in just seven years—it is 20 percent. So, to answer your question, I have seen it firsthand. In Taiwan, there was a baby boom, and the second generation of these baby boomers are not getting married [and having children]. More than a third of Taipei's population are not getting married. So, the population of Taipei is uniquely pear-shaped. And the largest group is around 45-years-old. If this trend continues, then very soon 40 percent of Taipei’s population will be above the age of sixty-five.

In January 2022, 20 percent of Taiwanese citizens were sixty-five or older

Think Global Health: What implications does that have for you as the mayor?

Ko Wen-Je: Many years ago, life expectancy was not as long. But in Taiwan now, male life expectancy is seventy-eight and for women it's eighty-four. This concept of retirement at age sixty-five needs to change. The thinking has to change. For example, in Japan and South Korea, the share of people over sixty-five who are still working ranges between 19 percent and 36 percent, whereas in Taiwan, it's only about 8.8 percent. I feel that older people, as long as they are healthy, should continue working until the very last minute.

Think Global Health: Are other city services more important because of the growing elderly population?

Ko Wen-Je: Yes, and Taipei has many of them. If all elderly people just sit at home idle, their health is going to get worse, so we want them to go out of the house and be active. The public transportation system in Taipei is extremely well developed and very convenient, including the shared bicycle system, shared motorbikes, buses, metro, and taxis. All we need to do is provide a subsidy to the elderly to make them willing to move around and be active.

Anyone over the age of sixty-five can receive a special seniors card that contains a value of NT$480 ($16) and gives access to public transportation and entry tickets to various venues. [Seniors] also get access to community sports centers that are spread out around the city. It's very important to encourage elderly people to go out, be active, and continue to engage in sports.

Taipei City has twelve districts and it used to have large sports centers, one in each district. Now, the city wants to have smaller sporting venues or gyms in each "village" or "borough," of which there are 456, particularly for elderly people. That proximity makes [sports] more accessible to them. If older people go out, exercise, and work, then we will have healthy old people.

Think Global Health: What processes do you rely on to learn about the needs of the elderly?

Ko Wen-Je: In collaboration with Taipei University, we have set up Taipei Advanced Center for Aging and Health, which conducts research on the needs of elderly people and provides the right services. There are different city departments within the government, including civil affairs, education, social welfare, and sports, and they form the core team that takes care of these issues. For example, in the 456 boroughs where we are setting up small gyms, the exercise equipment that elderly people use is different from what young people use. [Older people] need special exercise equipment.

Think Global Health: Are there other physical changes you’ve made to the city to make it friendlier for the elderly?

Ko Wen-Je: Yes, one example is called the Neighborhood Traffic Environment Improvement Plan. [This city is] encouraging the elderly to go out, but the environment that they go out into has to be safe. In the past, on the smaller streets of Tapiei, people would walk, and cars would pass and park, all in the same area. We realized that the number of people over 65 involved in accidents was extremely high. So, we created special pedestrian pathways. Even in the smaller streets—there's a dedicated pathway for pedestrians, cars have to be on either side, and parking is not allowed in those areas. We found these reduced accidents by 47 percent. Taipei currently has the lowest rate of accident deaths in the country.

The research team learned something interesting. If community centers provide free meals, the elderly do not want to come, because if it's free, they feel embarrassed going there. And if the cost is too high, they don't want to come either. So, the city decided that having a co-pay system is the best way to encourage them to come.

If all elderly people just sit at home idle, their health is going to get worse, so we want them to go out of the house and be active

Think Global Health: What are the main principles that exemplify what it means to be an elderly-friendly city?

Ko Wen-Je: Your actions have to meet their needs.

Taipei’s buses and metro system are elder-friendly. Of the city’s buses, 86 percent have a low chassis, so it’s easy for people to embark and disembark; it is just one step and you're in the bus. (Except for the ones that go up the mountains. Because of road conditions, they can't have a low base.)

The same with the metro. Some stations had an escalator or elevator on one side of the station but not on the other, so seniors could go up but then couldn’t go back down. The city invested NT$630 million ($21 million) to make sure there are escalators or elevators on both sides of the stations because the metro stations tend to be quite long. These are things we found out by talking with people, by asking them.

Think Global Health: Taiwan's experience during the COVID-19 pandemic has been widely praised, but now you’re adjusting to changing conditions. Because COVID is a disproportionate danger to the elderly, how are you opening up in a way that is conscientious of their needs?

Ko Wen-Je: In terms of pandemic prevention, the guidance doesn’t differ much between older people and younger people. The reason why Taiwan has been successful in controlling the pandemic is because whatever the government says, more than 80 percent of the people will comply. For example, if the government requires masks on public transportation, people will just do it. The city made an announcement one week—try to stay at home unless going out is absolutely necessary—and the ridership of the metro dropped by 70 percent. That's why Taipei has been able to control the virus well, because residents follow the instructions. Unlike in China, Taiwan doesn't need the police or military to keep people from going out.

The government also incentivized the elderly to get vaccines. In Taipei, if elderly citizens get vaccinated, they get a gift of NT$1000 ($33). Young people don't get that, only those above sixty-five.

Think Global Health: Did you have to address special concerns of the elderly as you opened up, or were they generally accepting?

Ko Wen-Je: The way Taiwan is lifting the restrictions is unique. It’s called micro-adjustment, micro-lifting, micro-release. One week, you can start doing one thing, and the next week, you can start another. Taipei has not had any dramatic changes, like in Japan, where they have full restrictions and then in one step, full release. They opened everything, cases started going up, and they’re locked in again, and then they'll open everything again. Taipei didn't do that. The thing with micro-adjustments is that people can adjust. That's how Taiwan is starting to live with the virus now.

EDITOR’S NOTE: This interview was conducted in translation via Zoom and has been edited for length and clarity.

The Rising Price of Dementia

As the number of people with dementia grows, families need access to affordable care