Go to homepage
What It Means To Be Fully Vaccinated
Governance 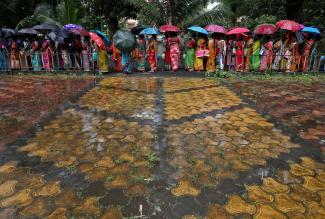 Women hold umbrellas as they wait to receive a dose of COVISHIELD vaccine, a COVID-19 vaccine made by the Serum Institute of India, at a vaccination centre in Kolkata, India, on August 31, 2021. REUTERS/Rupak De Chowdhuri
by John P. Moore October 21, 2021

What does "fully vaccinated" mean? It depends…

In the context of the continuing COVID-19 pandemic, it’s a good question. To try to answer it, let’s first consider what the vaccines are supposed to do. The most critical role for COVID-19 vaccines is to prevent people from dying. Keeping them out of hospitals is also very important. For low- and middle-income countries, where many medical facilities have limited resources, hospitalization with severe COVID-19 may all too often equate to death. And even in the United States and Europe, sophisticated health-care systems are often overwhelmed by local or national infection surges. We have seen the unfortunate consequences many times. Preventing asymptomatic and mild infections is a very attractive proposition but is a much tougher task for the vaccines to accomplish, particularly when antibody levels decline over time—as they invariably do.

All of the FDA-approved and authorized vaccines from other countries are lifesaving. While we lack solid data on exactly how well some vaccines perform in certain countries, what we do consistently see is that far fewer vaccinated people die of COVID-19 compared to unvaccinated people—whether it’s because they lack access to shots or refuse what is freely available to them. The benefits, in terms of death reduction, vary but can be up to 20-fold.

A less important—but not negligible—role of vaccination is to prevent people from becoming virus-infected. That’s a relevant success marker because blocking or limiting the severity of infection reduces the chances of onward transmission. It’s now clear that "vaccine breakthrough" cases can drive additional infections within a household or workplace, for example, particularly if the people around them are unvaccinated - such as children who are not yet eligible for vaccination. Even people who recover at home from a mild or moderate bout of COVID-19 often have an unpleasant experience. Being sick in bed for up to a week, and perhaps quarantining for longer, can also have a serious economic impact. Compared to severe disease, all the vaccines are less efficient at preventing infection, but they do provide a significant level of protection.

Let’s also consider what vaccines are now available for global use, and how they are administered. Vaccines designed and produced in the United States, the UK, the EC, Russia, China, and India fall into several categories:

A highly potent protein/adjuvant vaccine from Novavax (a U.S. biotech company) may be authorized for use in some countries by 2022. Many others are in clinical trials.

With a few exceptions, the COVID-19 vaccines were initially approved for two-dose delivery, with the dosing interval generally being 3 to 4 weeks, although some countries have used longer delays. The Johnson & Johnson vaccine was authorized in the United States for one-shot "give and go" use, but that well-intentioned decision is now seen by some as flawed. A two-dose upgrade has just been authorized by the FDA and will become the default protocol. Some inactivated virus vaccines are given in a three-dose regimen in certain countries. And the World Health Organization is now advising all individuals over age 60 who received Sinopharm and Sinovac, two inactivated vaccines, to get boosters.

Until a couple of months ago, the generally accepted definition of "full vaccination" was the receipt of two doses (or one for Johnson & Johnson) followed by a 7- to 14-day period to allow the second shot to fully kick in. That remains the legal standard on vaccination cards for international travel, for example.

Although a single dose of any of the vaccines does provide some protection, it is weak compared to the additional benefits conferred by a second, whether given after 3 or 4 weeks or a couple of months later (as applies in the UK). Relying on only one dose for a sustained period is a risky policy; by no means should one dose be considered "full vaccination." Technically, that term does still apply to people who received one Johnson & Johnson shot but may soon change once the second dose is widely rolled out.

Will the "full vaccination" definition change on a wider basis? Irrespective of what product is used or how many times it is administered, two factors have reduced vaccine performance during the past few months when gauged by prevention of severe disease and death or curbing infection: time and virus variants. Waning antibody titers over time can reduce the extent of protection. And the emergence of virus variants that are more transmissible and/or have a degree of resistance to vaccine-elicited, antibody-based immunity may reduce the efficacy of some of the current vaccines. The spread of the Delta variant in multiple countries this year sometimes coincided with the start of a period when some vaccines began to run out of protective gas. It was fortunate that the Delta wave did not hit the UK a few months earlier than it did, when so many people were reliant on only a single vaccine dose for protection.

It is hard to gauge whether declining immunity or problematic variants is more of a concern, but both are relevant to how the vaccines are best used. The resulting decline in vaccine performance has driven multiple countries to approve a third vaccine dose, commonly referred to as a "booster," to be given at least 6 months after the second dose. In the United States, most attention has been given to the Pfizer mRNA vaccine, but the booster question applies to all of them.

What benefits does a booster dose provide? How important is it? And will the definition of "full vaccination" now change to accommodate a booster dose? Will the same definition apply worldwide? These are difficult questions to answer without solid data, but more information will emerge in the coming months. One thing is clear: boosting the already vaccinated won’t be sufficient to curtail the pandemic. The key remains to vaccinate the unvaccinated.

We do know that a third mRNA vaccine dose strongly increases antibody levels, at least in the short term, but it is not yet clear how long that benefit will last. Nor do we know the extent and duration of added protection against infection and severe disease. Most of the recent decline in vaccine performance has affected protection from infection or mild COVID-19. The two-dose mRNA regimen still confers very strong, and only minimally declining, protection from severe disease and death. Even now, young, healthy people given two mRNA vaccine shots have virtually no risk of hospitalization and death. For older people and those with serious health conditions, a booster dose is well-justified but there has been, and remains, controversy about the need to do this on a more general basis. Where medical experts stand on this debate depends on the relative importance they apply to protection against asymptomatic or mild infection versus something much more serious, such as an ICU stay or death.

Boosting the already vaccinated won’t be sufficient to curtail the pandemic, the key remains to vaccinate the unvaccinated

The concept of a three-dose vaccine is not inherently unusual. A fairly standard, long-standing protocol for many (but not all) vaccines involves vaccination at 0, 4-8, and 6-9 months, with the third dose considered necessary for strong and durable protection. Had years of research on COVID-19 vaccines preceded the pandemic (which, obviously, was impossible), it is quite conceivable that they would have been used in this way right from the start. But that’s not where we are today.

Much of the attention paid to the booster question has been from already highly vaccinated countries, such as the United States, Europe, and Gulf states. For most of the world, talk about a third dose is a luxury when so many people have never seen a vaccine vial. This matters because the definition of "fully vaccinated" may depend on where you live and what’s available to you. Two doses of any approved vaccine provides strong and durable protection against severe disease and death for at least 8 or 9 months. The global vaccine rollout program should still aim to provide this "fully vaccinated" protection to as many people as possible – and as soon as possible.

Whether a third dose of the same or a different vaccine may eventually be necessary is not an immediately critical question. The populations of wealthy countries, where supplies of highly potent vaccines are not limited, may want still want a third dose. And in time, that additional protection may come to be included in the definition of "full vaccination." But bandying words around isn’t particularly helpful when the global priority is to provide two vaccine doses to billions of people who so badly need them.

John P. Moore is a professor of microbiology and immunology at Weill Cornell Medicine in New York City.