Go to homepage
The Summit for Democracy and U.S. Foreign Policy on Global Health
Governance

The Summit for Democracy and U.S. Foreign Policy on Global Health

As the COVID-19 pandemic continues, this week's summit underscores the need to rethink global health in foreign policy 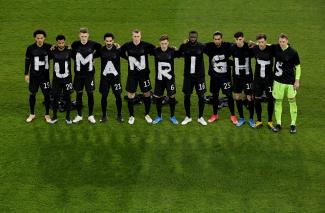 In his first year in office, President Joe Biden has made restoring democracy a defining feature of U.S. foreign policy. This week, Biden hosts a Summit for Democracy. The summit will address countering authoritarianism, corruption, and human rights violations and the threats they pose to the United States and other democracies. Addressing these threats is important for global health because better health outcomes are associated with democratic governance, corruption mitigation, and respect for human rights.

However, whether foreign policy engagement on global health helps counter authoritarianism, corruption, and human rights violations proves a more uncomfortable question. These threats emerged before the COVID-19 pandemic, at a time when the United States and other democracies were dedicating more foreign policy attention to global health. COVID-19 has exacerbated each threat, underscoring how conditions for democracy, anticorruption efforts, and human rights had deteriorated prior to the pandemic.

Heightened foreign policy interest in global health before COVID-19 contributed little, if anything, to mitigating threats now considered grave risks to the community of democracies. This context will intensify scrutiny of claims that engagement on global health produces a range of foreign policy benefits for the United States.

Prelude to a Pandemic's Wrath

With the pandemic approaching the end of its second year, the deleterious impact of COVID-19 on democracy, human rights, and corruption has been widely recognized. The pandemic has benefited authoritarian governments, and major democracies, including the United States, have performed poorly in responding to COVID-19. Human rights groups have identified pandemic-related violations of human rights all over the world. According to Transparency International, COVID-19 has triggered a global corruption crisis.

A once-in-a-century pandemic was likely to produce political problems on many issues. But COVID-19 alone cannot explain the scale and severity of the damage. Unfortunately, the pandemic hit after years of bad news on democracy, human rights, and corruption. Freedom House noted that democracy—and its protections for civil and political rights—had been in global decline for fifteen years before COVID-19. In 2019, Human Rights Watch warned that it was "a dark time for human rights" because "the forces of autocracy have been on the rise" and "continued their disregard for basic rights." Transparency International noted that most countries had "made little to no progress in tackling corruption" in the decade prior to the pandemic.

All That Glisters is Not Gold

The deterioration in democracy promotion, human rights protections, and corruption mitigation before COVID-19 tells a tale different from what happened in global health over the same period. The first two decades of the twenty-first century saw global health receive unprecedented attention. The first decade became a "golden age" for global health with dramatic growth in the number and diversity of actors involved, the frequency and ambition of initiatives launched, the innovative strategies adopted, the financial resources committed, and the lives saved and improved. This growth trajectory did not continue in the 2010s, but political and financial commitments remained steady at levels never seen before the turn of the century.

The United States and other democracies provided leadership and financial resources that helped transform global health. For example, through the President's Emergency Plan for AIDS Relief (PEPFAR), launched in 2003, the United States has spent over $100 billion, saved millions of lives, and changed the course of the HIV/AIDS pandemic. Similarly, democracies helped the Global Fund to Fight AIDS, Malaria, and Tuberculosis save 44 million lives between 2002 and the end of 2020. Not everything in global health went so swimmingly, but COVID-19's impact highlighted how much had been achieved. Bill and Melinda Gates lamented that COVID-19 stopped the "historic progress in fighting poverty and disease" achieved over previous decades, including setting back twenty-five years of progress on global vaccine coverage in about 25 weeks.

Global health's pre-pandemic story diverges from the contemporaneous deterioration in democratic governance, respect for human rights, and anticorruption efforts. This divergence is apparent in PEPFAR. Freedom House analyses and Transparency International rankings over time reveal no patterns of improvements in democratic governance and corruption across countries receiving PEPFAR funds. In sub-Saharan Africa, an area of focus for PEPFAR, COVID-19 accelerated a decline in democracy that was already underway, resulting in more Africans living "under fully or partially authoritarian states today than at most points in the last two decades."

In addition, many PEPFAR recipients have joined China's Belt and Road Initiative (BRI), which U.S. experts associate with China's expanding influence, the spread of authoritarianism, increasing threats to human rights, and new sources of corruption. The scale of PEPFAR and other U.S. health assistance to African countries did not stop China from using BRI and earlier efforts to become, as Michelle Gavin argued, "the preeminent and indispensable infrastructure and financing partner for many African states."

Sustained American engagement on global health over two decades happened while the balance of power changed in ways dangerous for the United States and threats to U.S. interests in democracy, human rights, and trustworthy governance proliferated globally.

President Biden has justified restoring U.S. leadership in global health to demonstrate that democracies can effectively respond to urgent challenges, such as pandemics and climate change. However, such U.S. leadership over the past two decades coincided with one of the worst periods for democracy globally since the disastrous twenty years between World War I and World War II. U.S. global health involvement also did nothing to protect the American democracy from interference by geopolitical rivals and insurrection by domestic factions.

U.S. global health involvement has not protected American democracy from interference by geopolitical rivals and insurrection by domestic factions

Such a rethink should confront whether the United States should condition global health assistance based on U.S. geopolitical and ideological interests or should come with "no strings attached." In making COVID-19 vaccine donations, the Biden administration touts that the donations come with no political conditions or expectations. This claim often produces skeptical eye-rolling, but it constitutes a foreign policy approach that prioritizes the humanitarian nature of global health engagement over the need to generate national security, "soft power," economic, or ideological benefits from U.S. global health activism.

When the United States and other democracies began to elevate global health in foreign policy nearly two decades ago, claims that global health engagement would produce a wide range of foreign policy payoffs flowed readily in a context where everything was unprecedented. Enough evidence has now accumulated—and domestic and international politics have changed so dramatically—to warrant challenging such claims, especially in a world marked by a pandemic disaster and a proliferation of dangers for democracy, human rights, and good governance. Such scrutiny need not marginalize global health in foreign policy because it could reveal important aspects of global health engagement that snapshots from indices, rankings, and global trends cannot capture.