Go to homepage
The Challenge of Strengthening Democracy and Global Health in U.S. Foreign Policy
Governance

The Challenge of Strengthening Democracy and Global Health in U.S. Foreign Policy 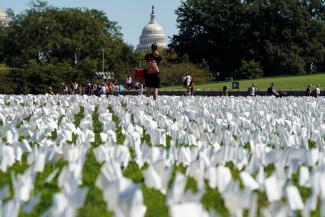 Thousands of white flags representing Americans who have died of COVID-19 are on view across 20 acres of the National Mall in Washington, DC, on September 26, 2021. REUTERS/Joshua Roberts
by David P. Fidler September 27, 2021

The mantra that pathogens take no account of borders, geopolitics, and political systems seeks to persuade governments to put politics aside, understand common threats, and cooperate based on science and epidemiology. This message creates tension with the belief in democracies that political philosophy matters in addressing health threats. Studies showing that democratic governance plays a meaningful role in producing good health outcomes provide support for this belief. However, the behavior of democracies during the COVID-19 pandemic has undercut the proposition that democratic governance is good for global health. The pandemic is forcing the United States to rethink the relationship between democracy and global health in its foreign policy.

The suboptimal performance of many democracies during the pandemic is an unexpected and sobering feature of this crisis. Major democracies considered global health leaders before the pandemic responded in ways that made COVID-19 a greater threat within and beyond national borders, including Brazil, EU members, India, the United Kingdom, and the United States. Poor pandemic responses from authoritarian countries provide cold comfort because democratic governance is supposed to be better. Explanations of how some democratic and authoritarian states implemented more effective policies have focused on non-ideological factors, such as whether countries learned from prior crises by improving surveillance, strengthening intervention capabilities, and sustaining political discipline when COVID-19 hit.

Given U.S. interests in democracy and global health, U.S. responses to the pandemic have been unsettling for those who believe that democratic governance can produce better health outcomes. The U.S. government proved unprepared for the pandemic and was unable and unwilling to mount an appropriate domestic response during the pandemic's first year. It marginalized scientific and public health expertise, politicized the pandemic, and spread disinformation. It attempted to withdraw from the World Health Organization (WHO) and damaged international cooperation. When the pandemic was raging most severely at home, the president of the United States sought to block the peaceful transfer of power after losing an election and incited an attempted insurrection at the U.S. Capitol. When vaccines appeared, the United States embraced vaccine nationalism and pursued geopolitically motivated vaccine diplomacy.

This 15-year democratic decline coincided with a period in which global health received unprecedented attention and funding. During this time, democracy promotion foundered, but global health governance, diplomacy, and financing experienced historic change. Further, the democratic decline was not a prominent issue in global health, even for democracies that provided health assistance to low- and middle-income countries (LMICs). These different trajectories suggest that democracy and global health did not have much of a synergistic relationship before the pandemic.

A look at U.S. health assistance to Uganda sharpens the issue. The United States has provided substantial assistance to Uganda through the President's Emergency Plan for AIDS Relief ($4.2 billion) and the President's Malaria Initiative ($444 million) since the creation of these programs. When these investments began approximately 15 years ago, Freedom House concluded that Uganda was "partly free," but Freedom House scored Uganda as "not free" in 2021. Transparency International ranked Uganda 117th in the world concerning corruption in 2005 and 142nd in 2020. Amnesty International, Human Rights Watch, and the U.S. State Department have documented many human rights problems in Uganda, including, as Mark Lagon highlighted, legislative measures to codify discrimination against LGBT+ persons. In addition, Chinese investments in Uganda grew significantly in this period, and, in 2018, Uganda joined China's Belt and Road Initiative. Although crude, this snapshot provides little evidence that U.S. health assistance to Uganda produced positive externalities for democratic governance, U.S. "soft power," or U.S. foreign policy concerns about China's growing influence in Africa.

COVID-19 emerged when commitment to democracy was splintering, and the behavior of leading democracies did nothing to rejuvenate confidence in democratic governance. For LMICs, the nationalistic responses of democratic nations to the pandemic exposed how unimportant global health is when democracies confront a pathogenic emergency at home. With the United States and China both using COVID-19 to escalate geopolitical competition, even global health did not escape the "Thucydides Trap." In all of this, LMICs might well discount American and Chinese ideological claims in sensing that, as Thucydides wrote, "the strong do what they can, while the weak suffer what they must."

The Biden administration's embrace of leadership in global health and democracy promotion echoes U.S. policies pursued during the post-Cold War period. However, the democratic decline and the pandemic disaster make clear that those policies failed. U.S. engagement with the WHO, participation in global health initiatives (for example, the Global Health Security Agenda), cooperation with non-governmental organizations, and provision of health assistance to LMICs did not prepare the United States for COVID-19 and played little, if any, role in protecting and advancing democratic governance worldwide.

As Lagon argued, the challenge for the United States is to invest in global health in ways that better support democratic governance. How much the Biden administration can or will break with past approaches to achieve such synergies is not clear, especially because the domestic and international political environments are not conducive to transformative changes in the relationship between global health and democracy.

Ongoing turmoil within American democracy, including orchestrated attempts to de-legitimatize Biden's election and escalating partisan warfare over COVID-19 policies, corrode U.S. credibility and damage domestic efforts to control the pandemic and protect democracy. The humiliating end to democratic nation-building in Afghanistan by the United States and its NATO allies produced rancor among democracies, with EU leaders calling for "strategic autonomy" from the United States—appeals that the controversial defense agreement between Australia, the United Kingdom, and the United States has amplified. LMIC openness to stronger links between global health and democracy promotion is unlikely given how democracies behaved during the pandemic and how they have not kept their promises on funding for climate change mitigation and adaptation.

In this unforgiving context, U.S. foreign policy will encounter serious difficulties in aligning its democratic principles with its material power. But the United States remains a powerful actor uniquely able to shift international agendas. President Biden is harnessing this capability as his administration works to increase global vaccine access, lay the groundwork for better pandemic preparedness, and reorient how democracies address authoritarianism. The transition from the pandemic tragedy and the global decline in democracy will be neither short nor sweet—but it will not happen at all unless the United States uses it power to act.