Go to homepage
The Steep Price of Education in Africa
Poverty

The Steep Price of Education in Africa 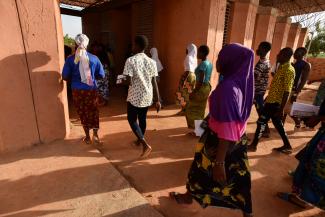 Students walk in the secondary school building that was built by Francis Kere, an architect who won Pritzker Prize, in his native village Gando, Burkina Faso, on June 3, 2022. REUTERS/Anne Mimault
by Emilie Maddison and Angela E. Micah August 4, 2022

The COVID-19 pandemic forced schools in Uganda to shut their doors for nearly two years, leaving approximately 15 million students behind on education. According to Uganda's National Planning Authority, nearly one-third of these students may never return to school.

For many students in Uganda, and in other countries, going back to school is a luxury that they cannot afford. "I have no hope of going back," said Isaac, a 15-year-old boy from Uganda, in an interview with Human Rights Watch. "You see, we are many at home and my father died in August 2020. So I have to continue working to help my mother educate the young ones," he said.

Even before the COVID-19 pandemic, paying for school was a challenge for many families in low-and middle-income countries, who spend a greater proportion of their household income on children's education than families in high-income countries. Now, after so many families lost their livelihoods during the pandemic, whether due to layoffs or the death of the primary wage earner, the costs of attending school may be out of reach.

Percent of Education Spending by Funding Source and Region

The High Burden on Households

In some of the world's lowest-income countries, including Uganda and Malawi, where families have to make difficult decisions about how, or if, to pay for tuition and school fees, uniforms, supplies, and other expenses necessary to send their children to school, the price of education can have devastating consequences for young people.

Current research from the Education Finance Watch 2022 report shows that in low- and lower-middle-income countries, households cover a much greater share of the cost of their children's education compared to their high-income counterparts. Household and other private spending in African countries contributed nearly 40 percent of spending on education, while governments provided 60 percent. Meanwhile, school enrollment and completion in this region are the lowest in the world.  In contrast, in high-income countries, where primary and secondary school enrollment and completion are highest, households contribute nearly six times less than what governments contribute to education. Generally, as governments spend more on education, more children complete their schooling.

In 2021, IHME evaluated data from household surveys, including ones conducted in nineteen African countries —all low- and middle-income—from 2010 to 2019. These analyses showed that households must pay for more than just school tuition and fees to provide their children with an education. The cost of supplies, uniforms, transportation, and other fees are also the responsibility of families. In fact, nearly one-half of household education spending across the surveyed nineteen African countries goes to costs outside of school tuition and fees.

Education Takes a Backseat During a Crisis

The state of education has worsened since the start of the COVID-19 pandemic. COVID-19 caused the worst global recession since World War II, pushing 37 million people into extreme poverty in 2020—a third of whom live in Africa. That, coupled with rising global inflation and other economic strains, is hurting the poorest families the hardest.

Families are experiencing a trio of worsening burdens as a fallout of the pandemic. Household incomes are down; inflation is up, leading to an increase in food and education prices; and many governments have cut their education budgets. Each of these means that parents and caregivers have to dedicate a larger proportion of their total income to children's education—and for some households, education is becoming entirely unaffordable. More young people are turning to employment, rather than schooling, in order to help their families weather the economic crisis.

For example, in Uganda, 17-year-old Mwesigwa Joshua began working as a fruit vendor while schools were closed. "I had no choice but to look for work," Joshua told NPR in an interview. But he dreamed of returning to school and studying to be a software engineer. "Out of the blue, my older brother called and said, 'You're going back to school,' I thought he was joking," Joshua said. "He called again and explained. I asked him where we would find money to pay for my tuition and he said he would send me the money. In the evening, he sent my mom money. So, the next week, I went to school, registered, and started school."

Alongside severe socioeconomic disruptions, extensive school closures have forced many children to drop out of school entirely. In Uganda, the country with the longest COVID-related school closures in the world, thousands of schools are expected to close permanently. Many families report soaring fees for the schools that have reopened. Even African countries with more moderate approaches to COVID-19 have seen dramatic changes in school enrollment. In Malawi, where schools were closed for just seven months, the country saw a three-fold increase in the dropout rate in 2020 and early 2021, especially among secondary school students.

For students who managed to return to school, there have been substantial losses in learning due to the pandemic. Despite the relatively low burden of COVID-19 deaths in many African countries, the long-term impact of the pandemic on children's education will continue to have ramifications for years to come. Evidence suggests additional years of schooling significantly improve health outcomes. Education is associated with fewer deaths for students, mothers, and infants and improves health behaviors, contributes to lower rates of infectious diseases, and increases income.

Given the importance of education, and the burden that paying for it places on families, it is vital for countries to make it easier for people to send their children to school. The fact that COVID-19 wreaked havoc on economies and disrupted schooling makes it even more urgent for leaders to invest in education. That's why governments should eliminate school fees for secondary school and reduce household expenses for schooling, such as by providing uniforms and supplies.

The long-term consequences of lower enrollment in school, higher schooling costs for families, and two years of lost education for students who remain in school cannot be underestimated. Educational systems that depend on substantial financial investments from households perpetuate systemic inequalities and widen achievement gaps. It is not only the role of governments to improve government funding. Global actors also play a crucial role in helping to make government-funded schooling a reality. COVID-19 will likely continue to have cascading negative effects on African education in the coming years unless action is taken to improve government funding for primary and secondary schooling.

AUTHORS' NOTE: In the absence of quality data that allow disaggregation by gender, we utilize data that disaggregate by binary sex, with the understanding that outcomes for people outside the gender binary are often less equitable than they are for cis women or men.

EDITOR'S NOTE: The authors are employed by the University of Washington's Institute for Health Metrics and Evaluation (IHME), which produced the development assistance for health research described in this article.  IHME collaborates with the Council on Foreign Relations on Think Global Health. All statements and views expressed in this article are solely those of the individual author and are not necessarily shared by their institution.

ACKNOWLEDGMENTS: The authors would like to thank Paola Pedroza for fact-checking assistance and Katherine Leach-Kemon, Manos Antoninis, Joe Dieleman, and Emmanuela Gakidou for providing feedback on the draft.

Emilie Maddison is a post-bachelor fellow at the Institute of Health Metrics and Evaluation at the University of Washington.


Angela E. Micah is an assistant professor at the Institute for Health Metrics and Evaluation at the University of Washington.

Gender Equality in the Global Return to School

School nutrition and health programs took a hit during COVID, now it's time to reinforce these school-based safety nets