Southeast Asia Needs Its Own CDC

COVID-19 is a baptism by fire and highlights the need for an effective, durable disease control authority in the region 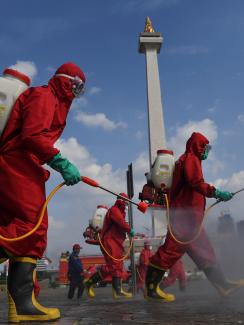 The ten nations of Southeast Asia have generally fared well during the COVID-19 pandemic. Although gaps remain in coverage and performance, the number of cases and deaths have not been as high as countries such as the United Kingdom or the United States, even after adjusting for different population sizes, health spending and national wealth. Why has this been so? There are in our view at least three important factors that have contributed: speed, alignment between political and public health leadership, and societal support.

Perhaps cautioned by the many experiences of outbreaks in the region including SARS and Nipah virus, Southeast Asian countries moved with decisive speed in their responses. Malaysia instituted a Movement Control Order in mid-March, while Vietnam quickly closed its borders, shut schools and quarantined communities in the initial weeks after the first case was detected. Indeed, Vietnam has had only 328 cases as of late June and no deaths. Unsurprisingly, it was named the "best COVID-19 performer globally" by Politico.

The second factor would be the strong partnership between the political and scientific leadership in Southeast Asia. In Singapore for example, the director of medical services, the senior-most physician civil servant is a constant presence at all news conferences and co-presents with the political leadership.

Even in countries that changed governments during the pandemic, like Malaysia, the scientific leadership works closely with the government of the day, and daily news briefings from the senior-most civil servant at the Health Ministry has built trust among its citizens. This is in contrast to several developed countries that appear to lack coordination between their political and scientific leaders. The third factor driving the positive Southeast Asian responses so far is the public acceptance and understanding on the need for public health measures such as testing, tracing, and tracking. Societies have also generally accepted temporary intrusions on their freedoms, such as targeted quarantines, lockdowns, and circuit breakers, in the name of public health.

In Indonesia, the most populous Muslim country in the world, Eid al-Fitr celebrations this year were subdued. Usually a festive season marked by large-scale family gatherings and mass prayers, this year's celebrations were quiet for Indonesia's 225 million Muslims with many opting to not return home to their families in the annual mass movement called mudik.

Cultural, societal, and economic ties are all profoundly impacted by COVID-19

Religious leaders supported government actions, and Indonesia's biggest Islamic group, Nahdlatul Ulama even issued a fatwa religious decree instructing Muslims to pray at home during Ramadan, rather than in mosques. Similarly, celebrations of the holiday in Malaysia were limited to minimal numbers and a ban on interstate travel. However, the vast disparities in performance within Association of Southeast Asian Nations (ASEAN) states does give pause. The ASEAN community has evolved to emphasize cultural, societal, and economic ties, all of which are profoundly impacted by COVID-19. Individual countries may perform decently in a pandemic like COVID-19, but can the region collectively perform outstandingly by working more closely together?

Regional Collaboration in ASEAN Can Be Strengthened

One remarkable feature of Southeast Asian responses to COVID-19 has been the general absence of regional collaboration. This is not unique to Southeast Asia. While Europe has seen some collaborations between country-level health systems, the national-level health system remains paramount. Decisions on lockdowns and socio-economic responses are made also by local or national governments—not the European Union, Commission, Parliament or Council.

Can the region collectively perform outstandingly by working more closely together?

There are several structural reasons for a lack of Southeast Asian collaboration. For one, the health division in the ASEAN secretariat is only one of forty-six divisions, indicating its relatively low priority within the ASEAN community. Furthermore, for historic reasons, ASEAN member states are split into two World Health Organization (WHO) regional offices instead of belonging to the same regional office. Three ASEAN nations (Indonesia, Myanmar & Thailand) are in the South-East Asia Regional Office (SEARO), together with India, Bangladesh, Sri Lanka, Nepal and North Korea. The other seven ASEAN nations are in the Western Pacific Regional Office (WPRO).

Even adjusting for ASEAN's split membership in the two WHO Regional Offices, there does not appear to be long-term mechanisms for intra-ASEAN and ASEAN–WHO collaborations. Funding and political capital for health collaboration are separate hurdles, as are ASEAN's founding principle of non-intervention and the understandable nationalist instincts of Southeast Asian governments.

Funding and political capital for health collaboration are separate hurdles

In 2017, ASEAN passed the Health Cluster 2 Work Programme for 2016-2020 to respond to all hazards and emerging threats. This program includes strategies to "strengthen capability, capacity & advocacy… against communicable diseases, neglected tropical diseases, infectious diseases, anti-microbial resistance, environmental health and disaster health management, including strengthening laboratory capacity." There are three other health clusters. Health cluster 1 is to promote healthy lifestyles, Health cluster 3 is intended to strengthen health systems and access to care, and health cluster 4 is to ensure food safety.

These goals are laudable, and the rhetoric surrounding them is welcome. However, there does not appear to be much public domain information on the progress made for all four clusters. For example, one goal in cluster 2 is to set up an ASEAN reference laboratory network before 2020. Unfortunately, there does not appear to be visible progress made towards this goal, even adjusting for its complexity and scale. Such a laboratory network would have been immensely helpful.

This COVID-19 pandemic is an opportunity, or even an incentive, for increased ASEAN collaboration. We believe that there is an opportunity to create an ASEAN Centers for Disease Control and Prevention (CDC) as a formal entity sponsored by ASEAN and operating on a scientific, evidence-based and collaborative agenda. This is consistent with relevant parts of the ASEAN COVID-19 Summit held virtually on April 14, 2020.

Preparing for the Future: An ASEAN CDC

The need for such a new CDC now is clear, especially as the pandemic moves into the "recovery but vigilance" phase. This phase will require greater cooperation beyond national borders, for several reasons.

During pandemics countries are only as safe as their (weakest) neighbors

First, public health principles and operations dictate that during pandemics countries are only as safe as their (weakest) neighbors are, and ASEAN nations after all are part of "one community." Second, as the economy, trade and supply chains restart across ASEAN nations, we need ways to protect against future waves of infections if people start moving again. This is on top of regular and irregular migration and refugee movements. As one example, 300,000 Malaysians travel to work in Singapore every day. There is also inter-dependence, for example when Singapore imports 90 percent of its food supply, with Malaysia, Indonesia, Thailand and Vietnam being key contributors, or the Jakarta-Singapore flight route being the second busiest in the world.

Third, ASEAN countries are collectively vulnerable in financial and health systems resilience terms to withstand several years of COVID-19, and they will benefit from some resource sharing, pooled or joint procurement, and regional capacity development. The regional depots of the ASEAN Coordinating Center for Humanitarian Assistance on Disaster Management, which deals mostly with relief for floods and other natural disasters, are a good example of how pre-positioning of supplies can be sustained with preparedness planning and joint procurement.

Even after the COVID-19 pandemic is over, an ASEAN CDC will increase Southeast Asia's health security because pandemics and regional epidemics will recur. The Sendai Framework for Disaster Risk Reduction, an international agreement adopted by the United Nations in 2015, ensures a holistic approach to security and safety that must also include health. An ASEAN CDC is by no means a magic bullet—nor is it a single solution but could be a large part of the overall solution to manage the three unmet needs described above. The functions of an ASEAN CDC can begin with coordinating some aspects of the COVID-19 pandemic management, sharing best practices and formalising the crucial multilateral information-sharing between the health-care leaders in ASEAN. This is similar in principle to the European CDC.

The initial funding for the ASEAN CDC can come from a combination of national governments, philanthropy within ASEAN and Asia Pacific, international grants and from the ASEAN secretariat. The CDC can start with staffing three groups of people in parallel: the scientific leadership, the technical experts, and a network of in-country leaders, and other experts.

Building such a system is not technologically difficult, and the hurdles are mostly political

In our opinion, an ASEAN CDC can (and eventually must) fulfil many objectives and roles. However, building a new entity in the middle of a pandemic must consider pragmatic realities and hurdles. Therefore, we suggest putting the political, organizational and financial resources into first building a transparent, consistent, and effective information-sharing system between ASEAN countries, which can hopefully inspire a positive domino effect. More specifically, the information sharing can be an early-warning system that allows quick and accurate signals to be cascaded to all ASEAN countries. Building such a system is not technologically difficult, and the hurdles are mostly political. It can be built on some existing ASEAN platforms such as the Emergency Operations Centre of the ASEAN Coordinating Center for Humanitarian Assistance on Disaster Management in Jakarta—although this center is intended more for disasters such as floods and storms.

Another such existing platform is in Thailand. The Field Epidemiology Training Network (FETN) was set-up in 2011 by the so-called ASEAN+3 nations (including China, Japan and South Korea), and provides a usable infrastructure and network to build on. There are other initiatives led by various donors such as the Australian and Canadian governments, but these are either limited by geography (e.g. only the Mekong Basin) or time (e.g., ending in the mid-2010s). ASEAN needs a permanent and effective CDC that covers all ASEAN countries.

Future activities for the ASEAN CDC are beyond "simple" information sharing. They can include discussions and preparations for stockpiling of medical equipment such as personal protective equipment, pooled procurement of vaccines and medicines, and combined manufacturing efforts to achieve economies of scale. They can also include discussions on migration health, combating misinformation and disinformation, such as the anti-vaccine movement, and health capacity development and sharing. Indeed, many of these programs are already in place in varying degrees of readiness, such as the ASEAN Emergency Operation Centre Network for Public Health Emergencies (ASEAN EOC Network) and ASEAN Risk Assessment and Risk Communication Centre (ARARC). But better futures and foresight analysis is required to remain ahead of the curve.

Previously, all these discussions were conducted in varying degrees of depth and sophistication. COVID-19 presents a real-life situation that can be used to build the first iteration of an ASEAN CDC, and then refine it when this pandemic is over. COVID-19 is the baptism by fire that ASEAN needs to create an effective and durable CDC, both to resolve this pandemic now and to prepare for future ones.


Jeremy Lim is the director of global health and an associate professor in the Saw Swee Hock School of Public Health at the National University of Singapore.


Li Yang Hsu is an associate professor in the Saw Swee Hock School of Public Health at the National University of Singapore.


Jemilah Mahmood is special advisor to the prime minister of Malaysia on public health.