Go to homepage
Preventable but Prevalent: An Injury Affecting Millions of Mothers
Gender 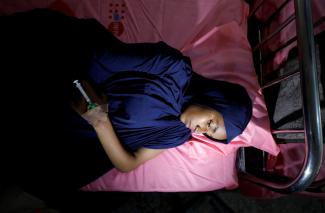 Mecca, a thirty-year-old woman living in Ethiopia, struggles with a daily onslaught of pain and embarrassment. She has been pregnant ten times and has seven surviving children. During her fifth pregnancy, Mecca suffered what's called an obstetric fistula, a hole that develops between the birth canal and the bladder through which urine chronically leaks. It's one of the most serious injuries that can occur during childbirth. Millions of women—primarily in low- and middle-income countries—experience the condition yet have no access to treatment or clean water to help with the hygiene issues that occur as a result.

People at high-risk for an obstetric fistula include women who experience prolonged labor, obstructed labor, or are frequently pregnant, and girls who are pregnant before their bodies are ready to carry a child. In extreme cases, fistula causes uncontrollable leaking of feces and urine, and can lead to crippling nerve damage and paralysis, kidney failure, and in some cases, death.

In addition to the physical consequences of fistula, women often face social ostracism and isolation due to the smell of leaking urine and feces, which can lead to extreme shame and depression and the inability to work or care for their children.

I met Mecca and dozens of women like her on a visit to Ethiopia with a small nonprofit organization, Village Health Partnership, that focuses on the critical lack of water, sanitation, and hygiene (called WASH) in health-care facilities in many low-income countries. After her fistula injury, Mecca became pregnant five more times and her last three pregnancies resulted in two stillbirths and one miscarriage. Approximately 90 percent of women who develop obstetric fistula end up delivering a stillborn baby. In fact, miscarriages and stillbirths were such common stories among the women I met in Ethiopia, I found myself feeling disturbingly surprised when a woman had not lost a child or had lost "only" one child.

Obstetric Fistula Is Treatable with Surgery

Obstetric fistula is preventable. It was eliminated in industrialized nations a century ago, but is still widespread in many low- and middle-income countries. The World Health Organization estimates some two million women suffer from an untreated fistula in Asia and sub-Saharan Africa, with approximately 50,000 to 100,000 new cases every year. The United Nations calls it a violation of their human rights.

According to the Fistula Foundation, which works to provide women with free reparative surgery, for every woman who receives reparative surgery, at least fifty go without. In addition to not having access to surgical care, the prohibitive costs of surgical services and transportation, a mother's obligations to family and work, time off for recovery, and stigma are obstacles to receiving treatment.

Access to effective reproductive health education and access to family planning is needed to help women choose the timing and spacing of their pregnancies. Family planning methods that are effective and acceptable to different cultures and economies can save lives, prevent suffering, and position families for greater security and success. Even in Ethiopia, where Christianity heavily influences culture and lifestyle choices, the wives and husbands I spoke with were open to family planning, but had limited access to and a lack of information on contraceptive methods.

Family planning alone is not enough. Prenatal care and giving birth in health-care facilities with the help of a skilled attendant greatly improve outcomes for mother and child. However, poor WASH conditions lead many women to avoid unsanitary and unsafe health-care facilities. Where WASH is missing, the ability to effectively clean hands and bodies before cradling and nursing a newborn, or even using a toilet after giving birth, are not options for a new mother. Predictably, preventable infections are a leading cause of death for mothers and newborns. By encouraging handwashing and clean birthing practices, neonatal deaths can decrease by 44 percent. The widespread lack of WASH impedes critical health care in hundreds of thousands of health clinics and hospitals across low- and middle- income countries worldwide.

Women know what they need. When asked about their priorities for quality health and reproductive services in an open-ended "What Women Want" survey by the White Ribbon Alliance, 1.2 million women in 114 countries responded—their leading requests were dignity in health care followed by clean water, soap, and toilets inside health-care facilities.

I hadn't anticipated meeting Mecca five years ago, and I haven't stopped thinking about her and the preventable shame, pain, and grief that she and women around the world endure, or the newborns they've lost to preventable death.

Shortly after I met Mecca, I learned she was a candidate for reparative fistula surgery. I do not know her outcome. What I do know is this: If maternal and newborn health is a core policy goal and moral imperative, we are failing millions of women and children. Health care should include access to family planning, and a place to welcome a child into the world that includes safe water and sanitation—and the safety and dignity that come with these.

Falling Through the Cracks: COVID-19 and the Rise of Maternal Deaths in Africa